From Picasso to Dalí: The Artists Adding Avant-Garde Gems To Your Jewellery Vault

Could you be looking in the wrong place for your Picasso? Writer Sophie Stevens explores why many jewellery aficionados prefer the work of artists to that of contemporary jewellery designers, highlighting the works of Pablo Picasso, César Baldaccini, Salvador Dalí and more

Dalí, Picasso, César: all infamous 20th century artist names whose works can command dollar prices into the tens (and hundreds) of millions. So it may come as some surprise that these great names also tried their hand at jewellery design, with many art aficionados adding these bejeweled masterpieces to their collections.

Jewels by Salvador Dalí were created in the latter part of his career, after he had been suspended from the surrealist group and veered away from contemporary art world trends. Designed between 1941 and 1970, such was his focus on jewellery over other works that one critic later crushingly stated he thought Dalí had died. Calling on the help of top jewellers Fulco di Verdura and Carlos Alemany, Dalí first designed his jewels on paper and selected the materials and gems to be used. 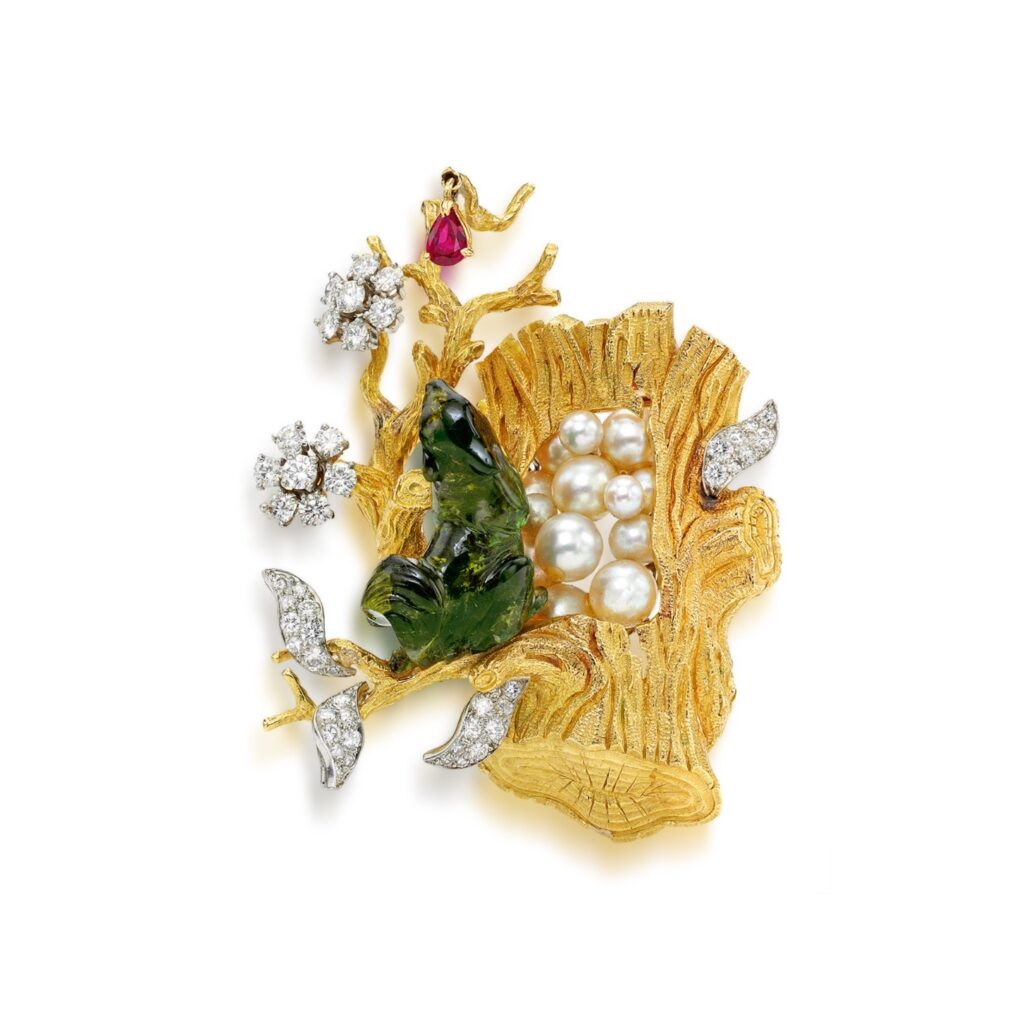 Despite some of their dreamlike designs (think gleaming pearl teeth bared between ruby-encrusted lips on a brooch, or melting gold telephone earrings suspending rubies and emeralds), Dalí demanded his jewels be taken seriously. “Illusory! Dalinian jewels are totally serious. I’m glad that people smile at telephone earrings. A smile is something pleasant. But those earrings, like all my jewels, are serious. They represent the ear, symbol of harmony and unity. They connote the speed of modern means of communication; the hope and the danger of an instantaneous change of thought,” the artist once said.

The prices for his one-off or limited-edition designs are just as serious. The “Eye of Time” blue enamel, diamond and ruby watch-brooch, for example, was originally conceived in 1949 as a gift for his wife, Galia. There are only four known examples of this work – one of which was sold by Sotheby’s in May 2014 for a whopping $1,055,000. Later versions still attract much collector interest however, with one “Eye of Time” watch-brooch by Henryk Kaston for Dalí reaching $75,000 against a rather modest pre-sale estimate of $15,000-20,000 in New York in December 2019. 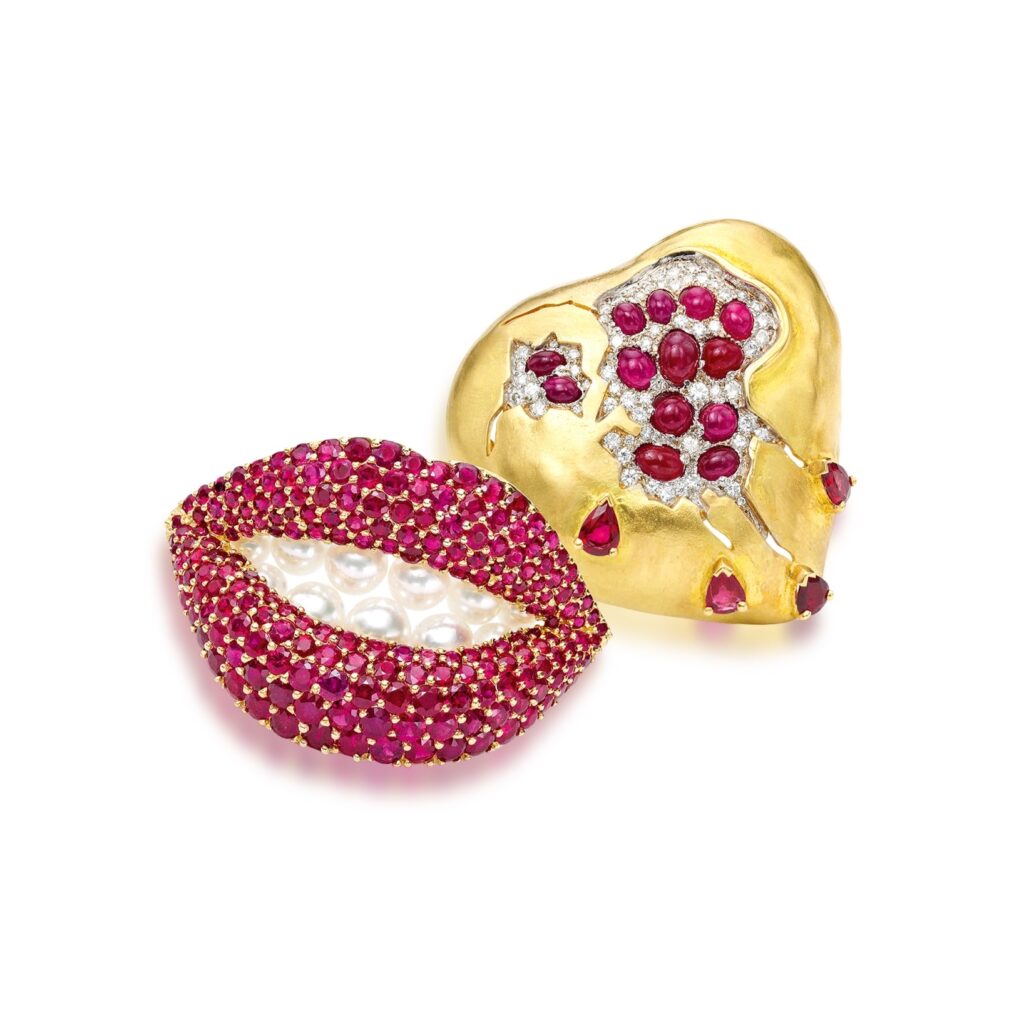 “Artist’s jewellery offers collectors almost the antithesis to Haute Joaillerie, where it is not the stones which necessarily hold the value, but the design and thought behind them,” says Jessica Wyndham, specialist and Sotheby’s head of jewellery sales for Europe. “You can of course be a collector of both categories but I see some buyers who would not feel comfortable wearing some of the more traditional multi-gem set pieces most of us think of when we think of high end jewellery, but who instead find themselves captivated by the illusory, sizeable and sometimes comical artist’s jewels.”

In contrast to Dali, Pablo Picasso’s foray into commercial jewellery was somewhat of a happy accident. In the late 1950s he asked his friend, French goldsmith François Hugo, to cast some of a damaged plate’s decoration in gold. From then until the 1960s, Picasso and Hugo worked together creating collections of high-karat gold medallions and brooches inspired by motifs in the artist’s paintings, each coming in limited-editions of just 20 pieces. 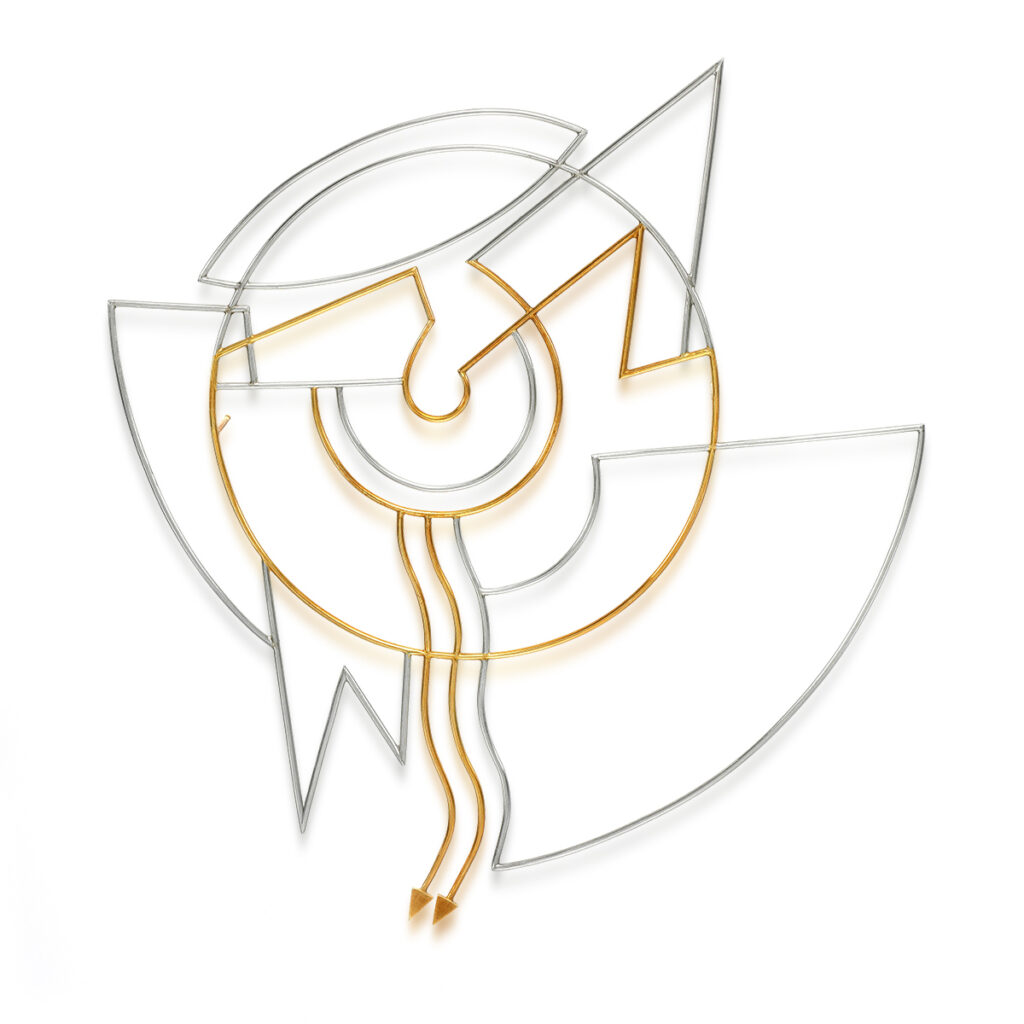 Picasso’s influence on jewellery continued into the mid-1980s, when British artist-jeweller Wendy Ramshaw designed her “Picasso’s Ladies” collection, designing one or more jewels for each of the 66 portraits by Picasso depicting the various women in his life – wives, mistresses, friends and muses. Displayed at the V&A for a time, these jewels include a brooch modelled as the head of Picasso’s muse and lover, Dora Maar, recently sold at auction for $3,200.

Other artist-jewellers have also tweaked their existing artworks into jewellery designs. French sculptor César Baldaccini (1921-1998) downsized his impressive “compression” sculptures into jewellery by blending clients’ existing jewels into individual pieces. These jewels are highly sought after, with one of César’s compression pendants soaring above its pre-sale estimate of $13,000-19,000 to almost $56,000 in London in April 2020. 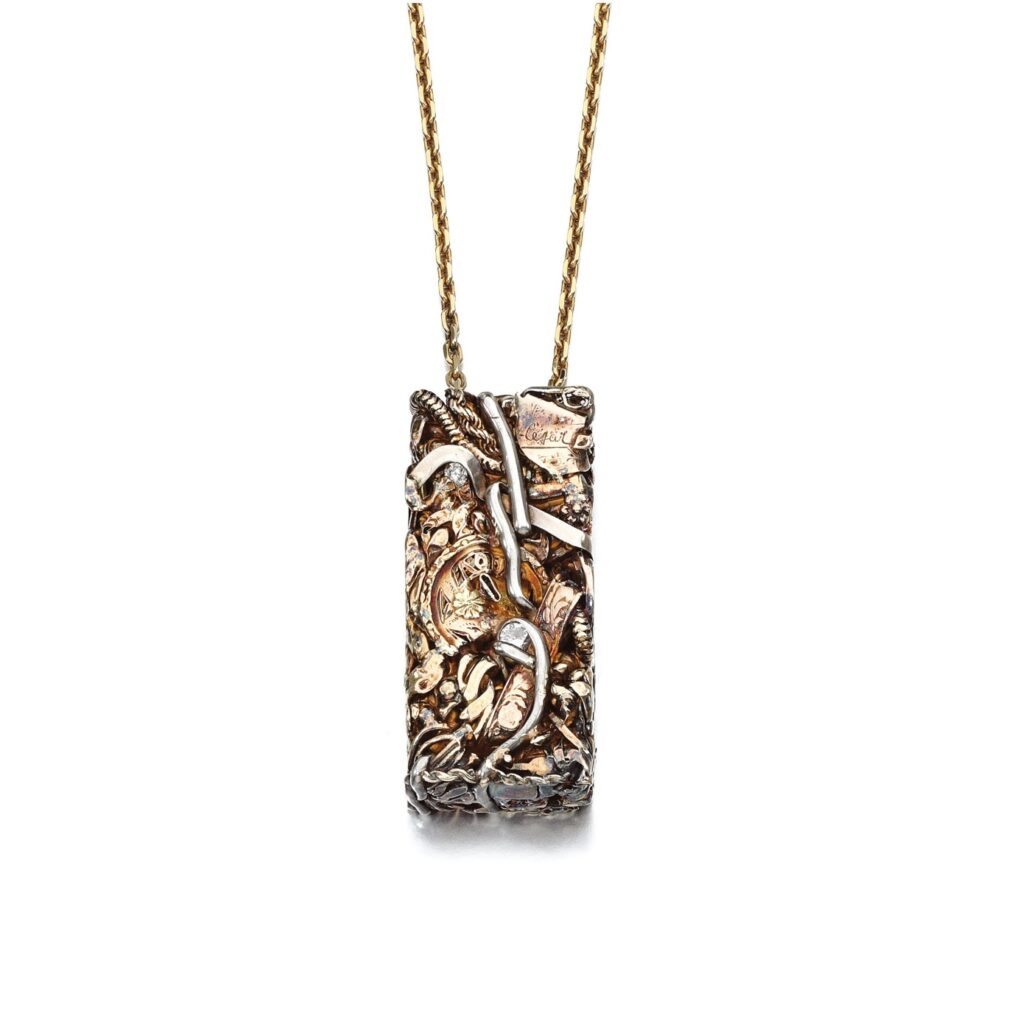 Precious metals and gems are, however, not necessarily a prerequisite for all artist-jewels. The minimalist, whimsical work of Alexander Calder first began in 1906 when, at just eight years old, he transformed some copper scraps he found in the street into miniature necklaces. This was a technique he would elaborate on in his later jewellery work – often in copper and silver but sometimes in gold – where he steered clear of traditional soldering and welding and instead hammered and bent the metals into wearable pieces.

Despite being uncomfortable to wear, these eye-catching pieces were soon seen on celebrity fans including Anjelica Huston, with actress Laura Dern sporting a Calder necklace to the 2018 Met Gala. Calder’s jewels, while minimalist in composition, can fetch impressive sums – a 1946 Calder gold wire and string necklace reached $312,500 at Sotheby’s New York’s Contemporary Art Day auction in November 2019. 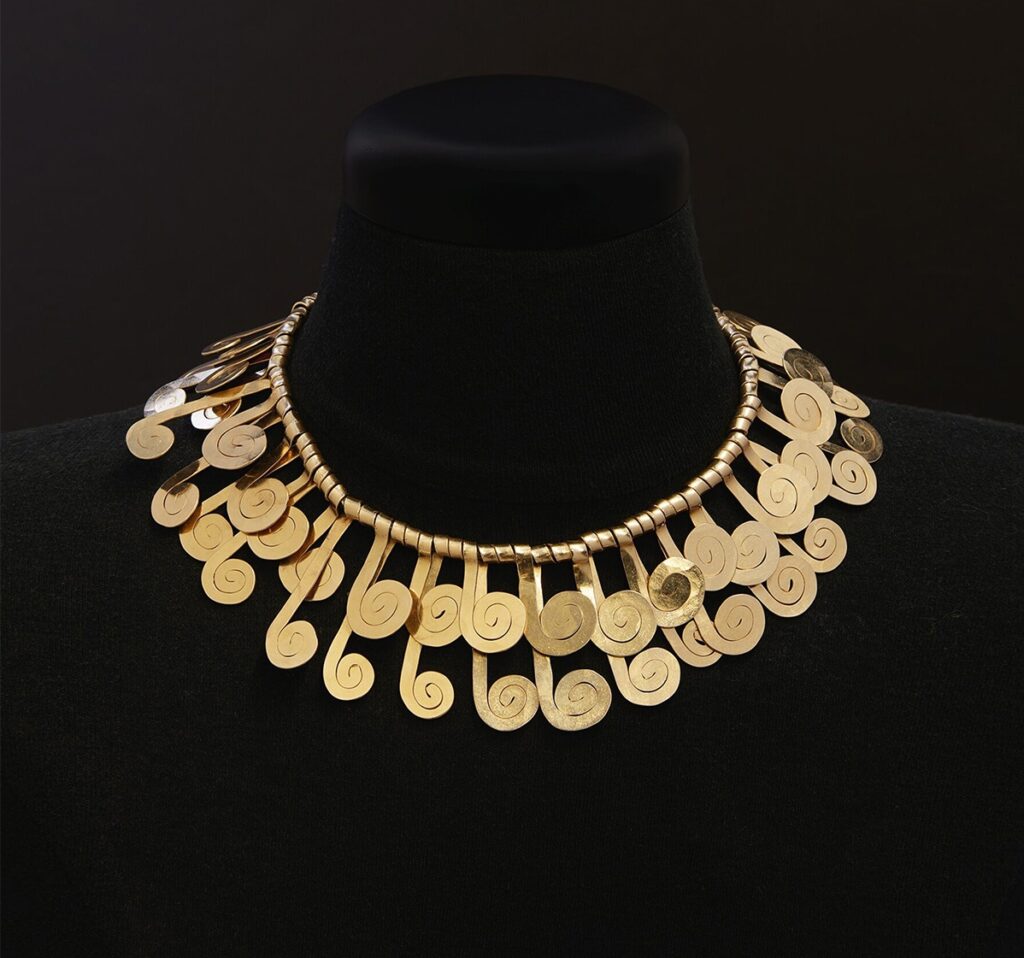 “These untraditional and highly original jewels demonstrate the imagination of the artists who created them,” explains Jessica. Whether they completely veered away from the artists’ typical medium or were a simple tweak in style, these jewels are a much sought-after addition to many an art collection. “In a world where we are each keen to be seen to have our own individual style, artist’s jewellery offers buyers the opportunity to break the mould.”

Sophie Stevens is the jewellery specialist at Sotheby’s Dubai; Sothebys.com

Read Next: An expert guide to buying jewellery at auction

A Digital Dash For Diamonds: Ushering In A New Age For Jewellery Auctions