Beloved fashion figure Daisy Fellowes, daughter of Duke Decazes and sewing machine heiress to the Singer fortune, commissioned from Cartier the handsome Hindu Necklace in 1936. A truly resplendent creation, the piece was crafted from an elaborate string of rubies, emeralds and briolette-cut sapphires, as well as fluted and melon-scooped beads. The French socialite famously wore the choker to what was later dubbed ‘The Ball of the Century’; a lavish gathering hosted by eccentric multi-millionaire art collector Charles de Beistegui at Venice’s grandiose Palazzo Labia in 1951.

Fellowes’s Hindu necklace resurrected the upper-class elite’s interest in audacious floral motifs, reminiscent of the formidable Mughal Empire that had ruled over northern India until the 18th Century. Precious gems, handpicked for their antiquity, personality and (above all) striking beauty, had long been carefully worked by highly-skilled Indian artisans, who utilised unique techniques in jewellery design and relief cutting. Cartier, inspirited by this redoubtable dynasty, took inspiration from the Mughal’s adventurous colour combinations, which continue to inspire the Maison’s high jewellery collections today. 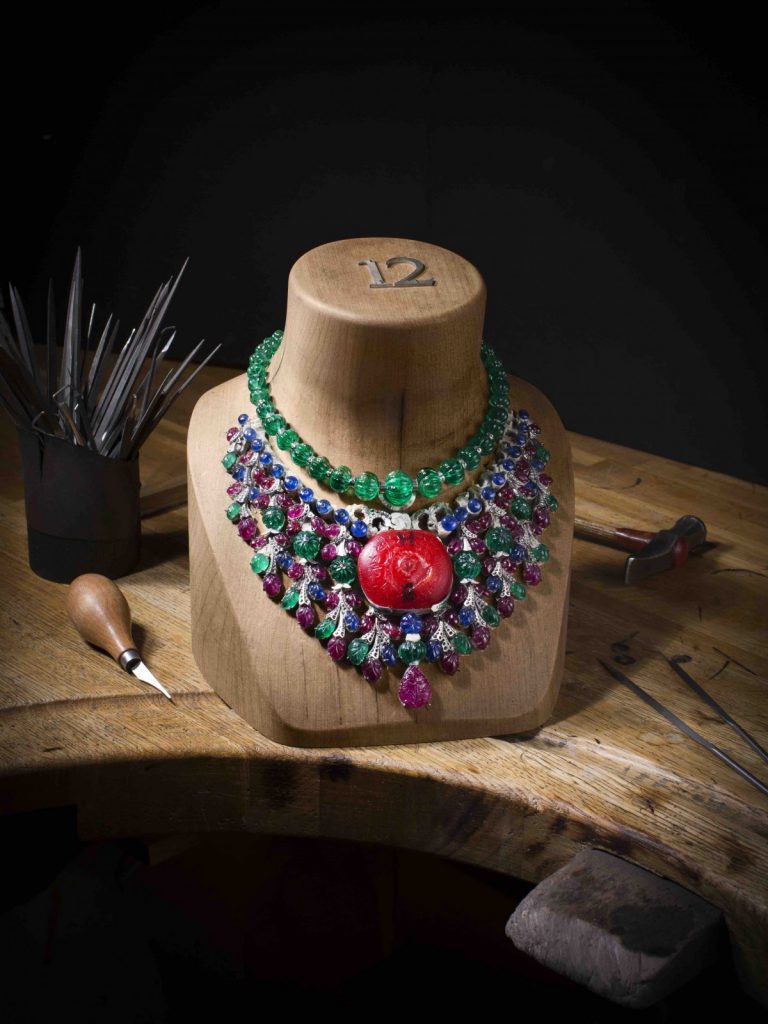 The Tutti Frutti collection’s crafted from an elaborate string of rubies, emeralds and briolette-cut sapphires, CARTIER.

The insatiable attraction and comforting nostalgia that surrounds antique jewellery has long been understood and catered to. The Rajasthan Necklace, which was unveiled last year, is an example of the Hindu choker’s long-lasting significance. The latest addition to Cartier’s instantly recognisable Tutti Frutti collection, which was first popularised in 1901 when the Maison’s founder designed a multi-hued pendant for Queen Alexandra of England, the Rajasthan proudly showcases an awe-inspiring 136.98-carat carved Colombian emerald, which is intricately engraved with an astonishingly elaborate efflorescent motif.

After all, heritage jewellery is weighted in meaning and, more often than not, there’s a sentimental reason behind why one desires a particular piece. A universal form of adornment, each creation has been heartily infused with the emotional life of its cherished predecessor and, subsequently, the remodelling of family jewels is fast becoming a growing trend for the modern woman. High jewellery heirlooms and gemstones are increasingly being refitted into contemporary, bespoke pieces that can be passed on through the generations.

Isabella Daniels is the first of a third generation to join her family’s business, luxury jeweller Yoko London. “Often, people inherit a special piece of jewellery through a family member,” she tells MOJEH. “While the piece is beautiful, it might not suit the particular style of the person who has inherited it. Consequently, the piece can sit in a safe without being worn for years. We’ve had cases with clients in similar situations to this, where the piece holds great sentimental and emotional value.”

Independent Parisian jeweller and experienced gemmologist Lydia Courteille agrees. “I think it’s a pleasure to be able to use stones that you’ve had in your family for a long time,” she concurs. “It’s a great shame to leave pieces in your vault without getting any use out of them. By remodelling heirloom jewellery, you’re able to give a second life to pieces that belonged to your ancestors.” 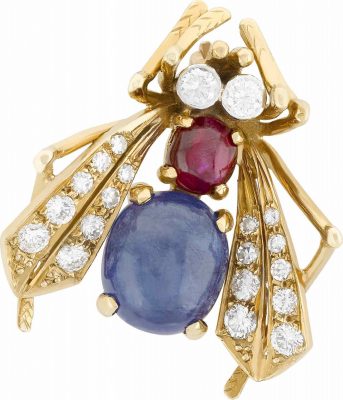 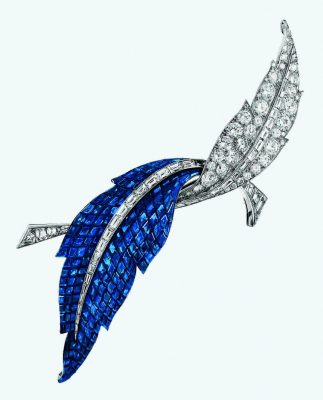 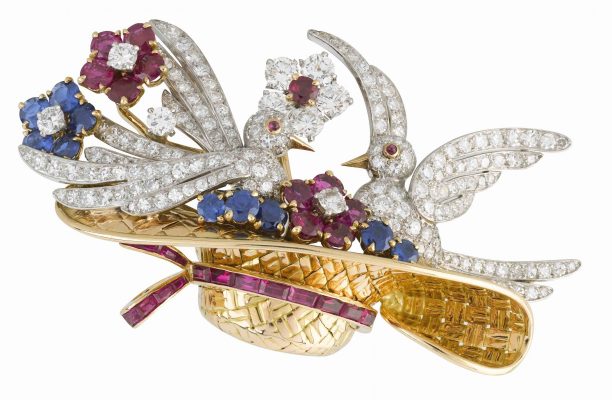 The heritage collection gathers vintage pieces created between the 1920s and the 1980s, VAN CLEEF & ARPELS.

After all, in an age of impersonal digital media, building social connectedness through nostalgia is an easy way to leverage optimistic feelings that take us down memory lane. The modern woman is more likely to wear her grandmother’s demure blue sapphire engagement ring, even if it doesn’t fit quite right, because she wants to forge a meaningful connection between her past and present.

“Most people who inherit heirloom jewellery have a very powerful emotional connection with the person who is passing the jewellery onto them,” says Amit Dhamani, CEO and managing director of Dhamani Jewels. “Buying or creating a new piece doesn’t carry the same history or stories behind it. For example, if the piece comes from a person’s grandmother, they want to keep the emotions and memories they have of her with them while they wear the piece.”

“Remodelling heirloom jewellery allows the piece to retain its sentimental value,” adds Daniels, “because we’re still using the original materials as we refresh and modernise the overall design.” Various jewellers, including British-based gemmologist Fiona Knapp, Hong Kong-based artisan Wallace Chan and Taiwanese bespoke designer Anna Hu (who has worked for Christie’s, Van Cleef & Arpels, and Harry Winston), recast gemstones into new designs, or melt down a piece’s precious metals so it can be completely reshaped.

Therefore, it’s easy to understand a person’s passion for old-cut diamonds, with many jewel enthusiasts spending years tracking down rare, high-quality antique stones from around the world for use in the creation of bespoke pieces – whether that be an exquisite amethyst and chalcedony stone reminiscent in colour of St Tropez’s kaleidoscopic waters, or a blush pink tourmaline hand-carved to dovetail like puzzle pieces.

There are, however, instances whereby a piece is considered too valuable to remodel. Fabergé, for example, creates extraordinary timepieces and objets d’art, as well as bespoke commissions for a discerning international clientele. Founded in 1842, the Maison became official goldsmith to the Russian Imperial Court, for whom the house created exquisite jewellery. Dr Géza von Habsburg, son of the late Joseph Francis, Archduke of Austria, and the late Anna Monica, Princess of Saxony and Archduchess of Austria, is an internationally renowned expert on Fabergé.

“Virtually all of Fabergé’s joaillerie, and by that I mean jewels with substantial precious stones, were broken up by the Bolsheviks after 1918 and sold in the West soon thereafter,” he tells MOJEH. “What’s survived, chiefly a number of tiaras and necklaces, were outside Russia at the time of the 1917 Revolution.” These were left unmodified, he reveals, “due to their exquisite and often very modern, typically Fabergé designs, which made, and still make up, their unique attraction.”

“The most important factor to consider when altering a vintage piece is the rarity of the period or era the piece was made in,” adds Dhamani. “These invaluable pieces have history and tradition that has captured our admiration engraved into them. When altering vintage jewellery, one wants to keep the alteration as minimalistic as possible, in order to preserve the uniqueness of the piece and the history of the time it was made in.” 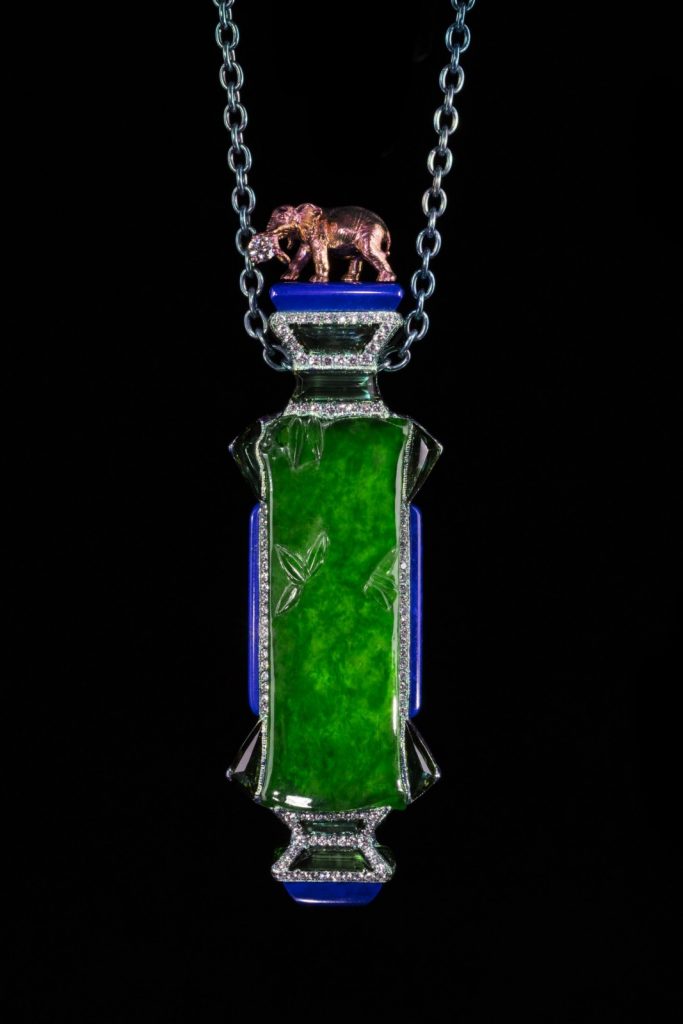 Noteworthy gems, however, are easier to alter than a completed piece. Harry Winston has long transformed illustrious stones into art and has subsequently revolutionised modern jewellery design. In 1949, he acquired one of the most famous jewels of all, the 45.52-carat Hope Diamond, which had been painstakingly mined in India before becoming a phenomenal centerpiece for the crown jewels in pre-revolutionary France. Other notable acquisitions included the South African 726-carat Jonker, which he split into 13 separate – but equally stunning – statement pieces.

Cindy Chao has also designed heritage jewellery from a specific, noteworthy gem. Sketches for her 2015/16 Ruby Butterfly, a creation that took two years to complete, first began when the artisan was presented with a 5.16-carat Burmese non-heat pigeon’s blood ruby that she fell in love with. “Each gem has a different story,” she tells MOJEH. “The jewels are an extension of the artist’s emotion. Through creativity and craftsmanship, I envision a piece of art jewellery that embodies vibrant life and movement, that creates a unique mood, as well as a connection for each viewer.”

The exceptional Pivoine Clip, crafted in the early 20th Century by Van Cleef & Arpels, is a piece that achieves just that; 706 rubies weighing 71 carats and 239 diamonds weighing 29.72 carats adorn the delicate pair of brooches, which were purchased in 1946 by Mahmoud Fakhry Pacha, the Egyptian ambassador in Paris, most likely on behalf of Princess Fawzia of Egypt, sister of King Farouk. The Maison’s heritage collection gathers vintage high jewellery pieces that were produced by the jeweller between the Twenties and the Eighties.

“These pieces are many years old,” reminds Dhamani, which can cause difficulties during the remodelling process. “The strength of the links and metal weaken due to wear and tear over the years. Remodelling doesn’t only include improving the look of the jewellery, but also working to ensure that the piece remains intact. This means making sure that the stone settings are secure, that the links are strong, and that the gemstones are undamaged while preserving the integrity of the piece.”

According to both Dhamani and Daniels, it’s important when altering heritage jewellery to ensure that the creation’s authentic period details are preserved, so that the final product blends seamlessly with the original. “One must pay very close attention to the structure of the piece and the way it was engineered in order to understand how to best deconstruct and reconstruct the creations,” affirms Daniels.

“The choice of how a jewellery creation should be worn and its suitability also needs careful thought,” adds master goldsmith Elizabeth Gage, one of the most influential British jewellery designers of the last five decades. “For example, if the owner wants to wear a specific stone as a ring, that stone must be a hard stone, not a soft or damageable one.”

While the art of remodelling high jewellery has existed for centuries, recycling heritage items, or parts of them, has become more popular than ever. Whether it’s the simple resizing of a geometric, vintage wedding ring, or the ornate resetting of gems from a family brooch into earrings for several family members, the range of possibilities is endless. The best part: The emotional connection you’ll retain with a remodelled item is truly unique and will serve as a lasting union of the past, present, and future.