Plus-Size Models Shake Up The Industry

For decades, one of the most controversial aspects of the fashion world has been its preferred type of model. Tall, pin-thin and raw-boned beauties have long been favoured to exhibit the world’s most plush and posh clothing, resulting in a distinctive debate that evokes frustration and anger, both in the media and amongst the highest-living style connoisseurs. An emerging emphasis on inclusivity has subsequently been awakened, throwing the industry into a much-welcomed tailspin that was celebrated and capitalised upon during this year’s autumn/winter shows.

A diverse range of ages and backgrounds were sumptuously showcased on numerous star-studded runways that, at long last, broke the silk-lined boundaries that have pigeonholed many an aspiring clotheshorse who has previously not been considered ‘the norm’. Arguably the most audacious stance was witnessed by brands that have begun to embrace size diversity, a trend that was epitomised with the appearance of models such as Ashley Graham, who cemented her status as a world-renowned supermodel at Michael Kors Collection, and Candice Huffine who walked alongside Marquita Pring for Lane Bryant’s collaboration with Prabal Gurung.

Even Paris, the industry’s nerve centre renowned for its love of razor-thin women, hosted fiery redhead Katy Syme and blonde bombshell Stella Duval at H&M’s vibrant see-now-buy-now presentation. For Syme, it’s a priority that a model’s wellbeing and health be safeguarded, along with those who aspire to wear his or her clothes. She subsequently embraces this increased number of plus-size models being showcased. “The fashion industry absolutely has a responsibility to protect both the people working in it, and those consuming it,” she tells MOJEH, before adding that she believes, “there’s still a way to go until we can count fashion as totally inclusive.”

Be that as it may, recent runways suggest steps are being made in the right direction, thus breathing fresh air into an industry overshadowed by reports of poor working conditions and the use of anorexic models. French luxury groups Kering and LVMH, which collectively own leading brands Alexander McQueen, Christopher Kane, Stella McCartney, Louis Vuitton, Dior and Céline, recently vowed to stop using underweight models from September onwards, opting instead for healthier and, in many cases, fuller figured women, in a direct response to criticism of how models have previously been portrayed and treated. 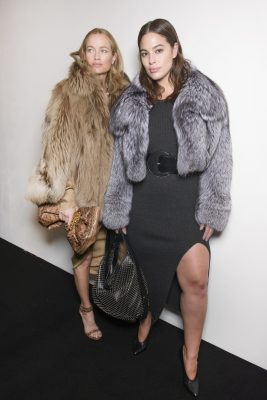 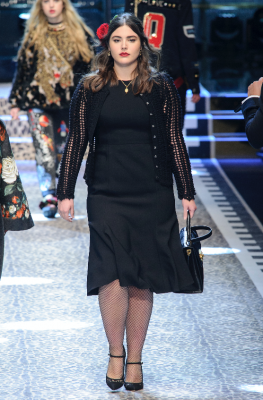 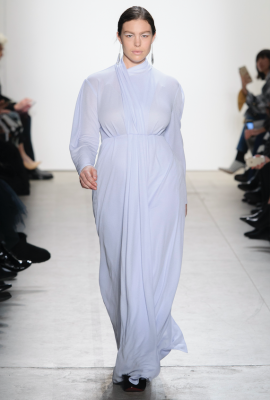 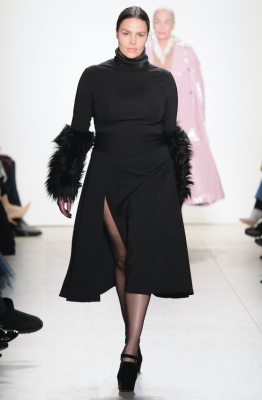 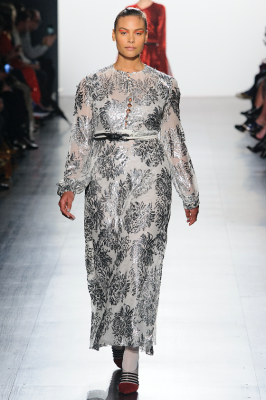 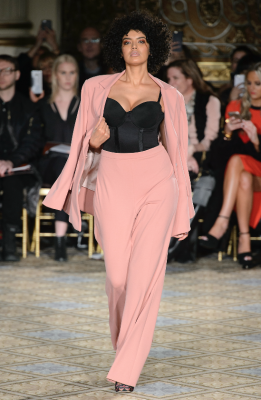 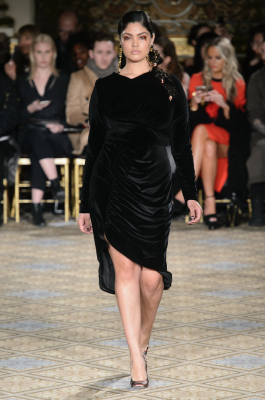 Antoine Arnault, member of LVMH Board of Directors, said at the time: “The wellbeing of models is of great importance to us. As the leader in the luxury sector, we believe it is our role to be at the forefront of this initiative. We have the responsibility of building new standards for fashion and we hope to be followed by other players in our sector.” His comments follow saddening allegations in March about two Kering-owned Balenciaga casting directors, who reportedly left 150 models alone for hours, crammed into a dark stairwell, after they decided to indulge in a long lunch.

François-Henri Pinault, chairman and CEO of Kering, said afterwards that, “respecting the dignity of all women has always been a personal commitment,” before furthering that the September charter consolidated, “our commitment to abide by its terms, we are once again manifesting the importance of this core value in a very concrete manner. We hope to inspire the entire industry to follow suit, thus making a real difference in the working conditions of fashion models industry-wide.”

Meanwhile, a recent report released by The Fashion Spot, which surveyed 2,601 runway appearances during New York Fashion Week, published that there were an impressive 90 plus-size castings in over 94 shows. Of those appearances, 56 were recorded at Canadian clothing store Additional Elle and women’s retail chain Torrid’s runways, while Christian Siriano and Chromat racked up 21 between them. And although shows with bigger models represent only a small portion of those staged, this shift toward runway realism is undoubtedly refreshing for fashion observers who have expressed enthusiasm for an increase in size diversity.

For Syme, however, it’s equally important to emphasise the negative impact of body shaming those who boast slight silhouettes, which is all the more relevant now plus-size models are making waves in the industry. “I find it difficult to stand behind the absolute banning of any body type from the industry,” she tells MOJEH gingerly, “because I don’t agree with making anyone feel excluded, but I think we have to move on from this damaging attitude that the only way to be beautiful is to be as small as you can be.” After all, with body-positive messages on the rise (remember Ashley Graham’s stunning cover feature in Sports Illustrated and Maxim?), why shouldn’t we put pressure on this industry into broadening the requirements needed to become a model?

Louisa Harvey, feminist activist and representative of AnyBody (an online platform that gives women a voice to challenge how they’re stereotyped in modern society), agrees. “It’s significant that we talk about body types as fashionable or dated, as this shows a general attitude towards the body as a thing that can be altered and re-designed like a piece of clothing,” she points out. After all, supermodels such as Cindy Crawford, Eva Herzigová and Claudia Schiffer were all popular in the late-Eighties and early-Nineties, but look close to curvaceous when compared to the svelte faces we know and see today.

“Can we focus on modelling being about amazing storytelling?” Syme asks. “And about creating healthy, happy, well-rounded role models for young women to look up to?” A long list of ‘model activists’ mirror this opinion, using social media to incite change. Tess Holiday set up the hashtag #effyourbeautystandards, while Clementine Desseaux and Charli Howard launched the body-positive movement, All Women Project. “I think what we’re really seeing happen is a cultural shift in health and wellness,” says Corinne Dobbas, a registered dietician and life coach. “One that stems from the inside-out and lends towards body acceptance.”

Is Dobbas right? Rather than spearheading this change in how we view our bodies, is the fashion industry, in actual fact, following society’s already growing acceptance of bigger women? “I don’t think it’s just bigger body shapes that have become more fashionable in recent years,” she says, “I think it’s all kinds of body shapes.” Personal stylist Lisa Talbot concurs. “I’m not sure whether the fashion is about bigger body shapes, but more about each person embracing their own and not worrying about being a size eight,” she tells MOJEH, and unlike previous seasons that focussed on one or two plus-size models (think Sophie Dahl and Crystal Renn) recent shows have showcased multiple talents, offering greater inspiration for those who weren’t born with pinched-in waists or narrow hips.

“Seeing greater diversity begins to highlight that it is possible for all different kinds of bodies to be legitimate, to be seen,” considers Harvey, who views this phenomenon as the start of a greater movement. “It is really important to remember that the push for acceptance of bodies of all types started with grassroots activists, and it’s a political statement that says: ‘The appearance of your body should not affect your rights as a member of society.’”

“We’re getting better and better at celebrating diversity, and the endless different types of beauty in the world,” says Syme. Harvey adds: “The fact that we’re seeing a slightly greater diversity of body shapes is certainly to be welcomed, although there is much more work to be done to get us unstuck from clichéd stereotypes.” Gigi Hadid, for example, made headlines when Tommy Hilfiger revealed to Yahoo Style that his casting director intentionally covered her body in a giant poncho for a runway show. “Our casting director said, ‘She doesn’t really fit because, you know, she’s not quite as tall as the other girls, she’s not quite as thin.’”

Hadid has come under fire for her weight on numerous occasions. Blanca Padilla, who has walked in the Victoria’s Secret fashion show, alleged that Hadid’s size was evidence that her social influence is behind her modelling success. And in May this year, casting director Ashley Brokaw was criticised for cancelling model Ulrikke Hoyer from a Louis Vuitton show last minute for being “too fat”. The Danish model took to Instagram and Facebook to highlight the alleged abuse after she was told to “drink only water for the next 24 hours” by Alexia Cheval, Brokaw’s assistant.

Such unfortunate instances enforce the stereotype that fashion houses have the mentality of the cool kids in high school. Or, to be more accurate, the cool kids in a Nineties rom-com about high school. And while it’s no secret that the fashion industry is becoming more diverse, whether that be through embracing plus-size models to welcoming various cultures, in conversations behind-the-scenes, it’s acknowledged that this movement has a long way to go. And as gym-bunny bloggers and slinky silhouettes aspire towards rounded hips and hourglass shapes, it’s difficult not to wonder whether this is nothing more than a fleeting trend. And if so, how will we go back to loving our bodies once it’s over?

The Big Reveals of LVMH Watch Week in Dubai