Marrying punk with romance, Pierpaolo Piccioli created a mainly monochrome AW21 collection for Valentino, and it will be a hard act to follow

What Pierpaolo Piccioli wants, Pierpaolo Piccioli gets. And what he wanted for the Valentino AW21 collection was one of Milan’s most iconic theatres, closed to the public since the beginning of the pandemic. Where there’s a will there’s a way, though, and Piccioli reopened the historical Piccolo Teatro di Milano for the span of the show to display the House’s innovative fall collection, Valentino ACT AW21/22, albeit without an audience, and with the theatre’s empty seats only illuminated by the catwalk’s vast Valentino V logo. “Reopening a theatre, even though only for the span of a show, is a bold, almost punk, gesture,” said the creative director in a statement before the show. “An invitation to aggregation and sharing when these activities are denied.” 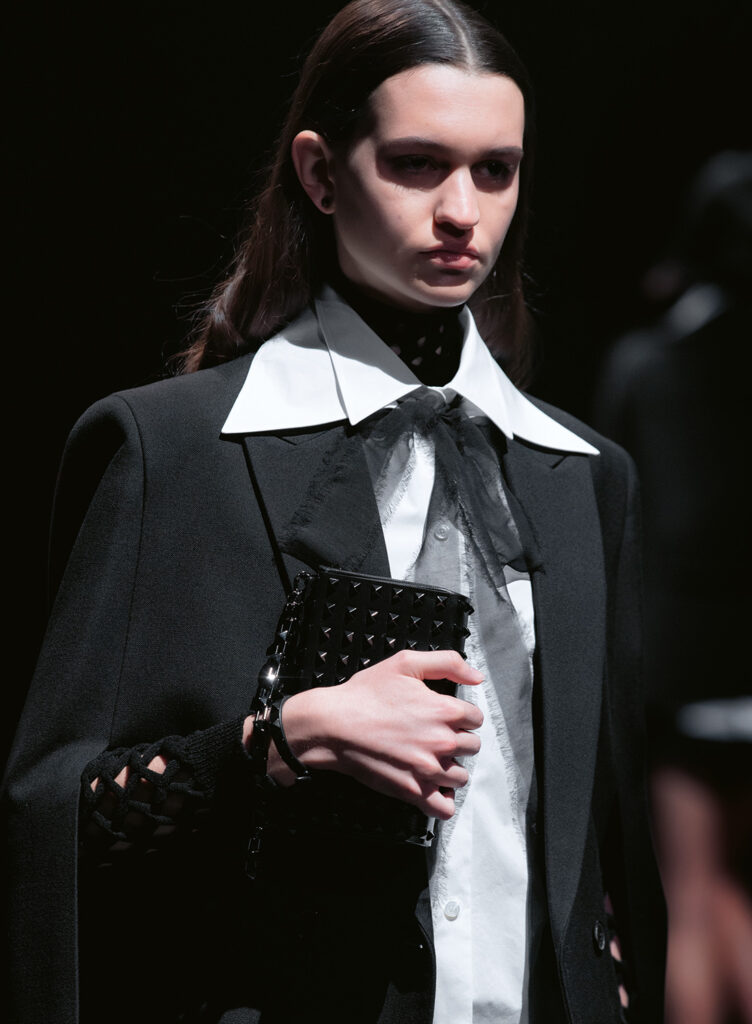 Unveiled on the last day of Milan Fashion week, this statement punk spirit was seen throughout the collection’s 66 looks—both male and female—with Pierpaolo Piccioli showing a dreamy array of fashion that’s a world away from his usual hyper bright colour palette. Instead, he threw us a curveball with mainly monochrome pieces and just a small hint of colour. Chic, sharp and ultra concise, hems were drastically chopped, with thigh-skimming dresses and pleated shirts offering new proportions. Peacoats and jackets morphed into capes and pointed elongated collars of snow-white shirts were visible over perfectly tailored jackets, while turtleneck sweaters appeared alongside Valentino’s signature floor-length gowns in sheer, feathers, lace and sequins. A standout look was a black gown in single panels held together exquisitely by ribbons—it was one we won’t be forgetting in a hurry.

When a hit of colour did make an appearance it was in muted gold short suits perfect to take you from the boardroom to the bar, while prints were used sparingly too—just a small touch of animal print, checks and polka dots here and there. Nets were also a surprising recurring theme for Valentino AW21, elongated in a cut-out cashmere duster over a crisp white shirt and black short, enlarged in a diamond pattern on a cashmere sweater worn as minidress, and rendered in the second-skin high-collared turtlenecks that were worn throughout the collection.

Elsewhere Valentino’s fierce spirit revealed itself throughout with strong accessories. We saw a magnitude of studs lacing the toe of nude pumps, plus Valentino’s popular Garavani Rockstud bag on which metal pyramid studs and slender straps lent a punk-inspired edge to the RTW. As for the shoes, knee-length riding and combat style boots plus black and white heels for women stormed down the catwalk. Pierpaolo Piccioli’s goal was to convey a message of freedom and hope through both the opening of a theatre after so many months, and the creation of a collection that actually makes us look forward to autumn. Well: Mission accomplished. Shop now

Read Next: The Autumn/Winter 2021 Trend Report