As head designer of both heritage brand Loewe and his achingly-cool namesake label, Jonathan Anderson has bold ambitions for the future of fashion. 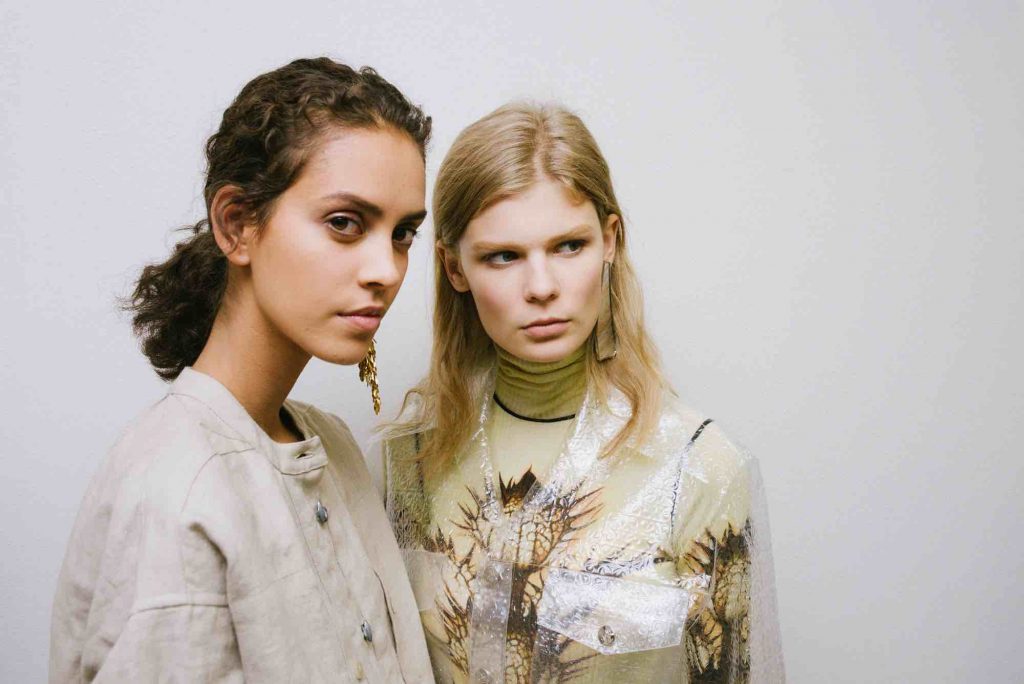 At first glance, comparing the Loewe and JW Anderson labels immediately conjures up images of chalk and cheese. The former is one of Spain’s most iconic luxury brands, boasting a 170-year-old heritage; the latter one of London’s hottest labels, born in just 2008. Yet, there is one common denominator that binds the two houses together – a 31-year-old provocative RTW designer hailing from the tiny County Derry in Northern Ireland, who is shaking up the industry as we know it. In fact, Jonathan Anderson has fast become such a style prodigy that LMVH were willing to wager their cherished Loewe brand on his talent alone. And that’s definitely something you don’t see every day. So now, every Sunday evening, J.W. Anderson travels from his edgy digs in Hackney, East London, jumps on the Eurostar to Paris, and come Monday, he’s Jonathan Anderson, creative director of Loewe. 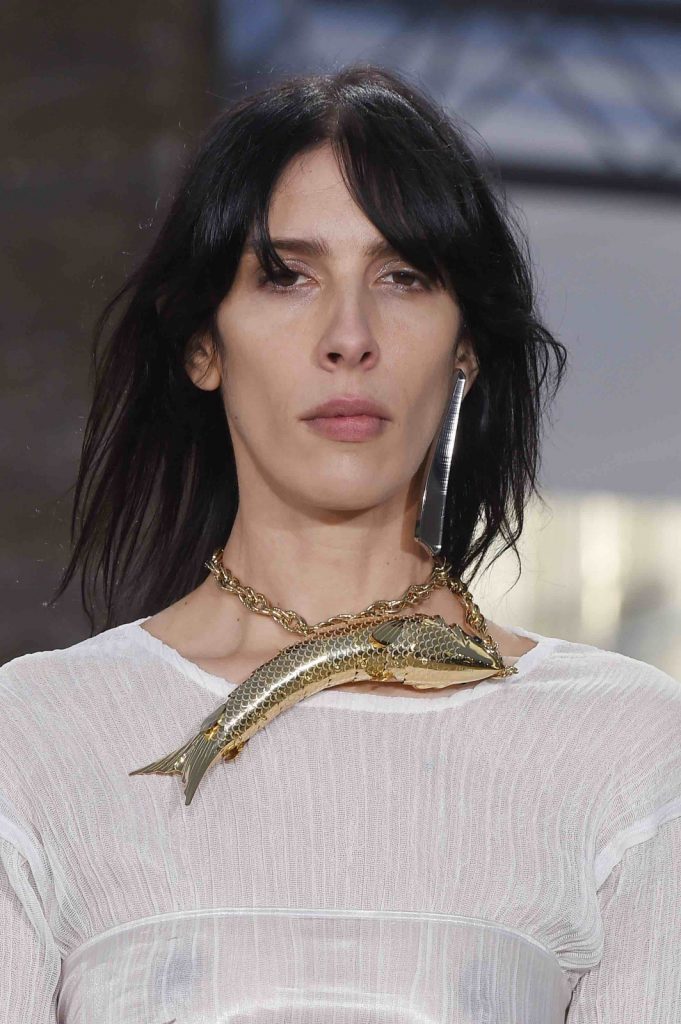 Anderson first launched his career as a menswear designer in 2008, just two years after graduating from the London College of Fashion, and was quick to be heralded as ‘one to watch’ by fashion’s elite. Since then, he has gone from strength to strength. Womenswear followed in 2010, and by 2012 he had collaborated with high-street giant Topshop on a hugely successful limited edition collection of clothing and accessories that sold out within hours of hitting shelves. A year later, Donatella Versace recruited him to design a collection for Versace’s diffusion line Versus, which also debuted to international acclaim. So, when he was cherry-picked by the big dogs at LMVH to take the creative helm at Loewe, a label that, up until then, had remained a quiet yet luxurious heritage brand, the question on everyone’s lips was – how would Anderson marry his young, edgy aesthetic to such a classic, well-established trademark label? “I didn’t really know very much about the house to be honest,” he admits. “But when I first went to the factory, I fell in love with it instantly. I just thought it was like a big, giant, top-secret project just waiting to happen. I was dying to do it.” And today, Anderson’s ambitions for Loewe are both bold and brave, as he strives to push it forward into the modern-day arena. “My goal with the philosophy of the brand fundamentally is to restore it to the point it was at during the Fifties, Sixties and Seventies,” he continues. “I want to take it forward and make Loewe relevant today. It needs to become relevant for young people and all demographics. Playing with different technologies, playing with the elements of fashion and trying to build a language into Loewe, which it didn’t really have.” 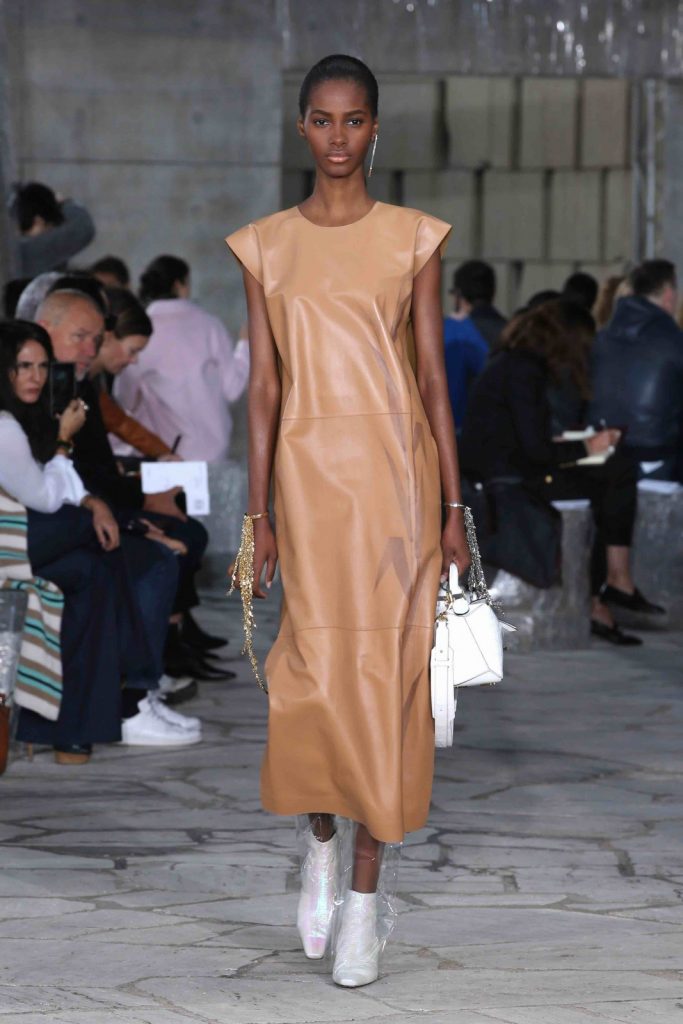 While he didn’t want to pull a Hedi Slimane and completely revamp Loewe, Anderson did go into his new role with a clear head about the direction in which he would be pulling it. While he forwent a total overhaul and name change, he started by rebranding and redesigning the logo and packaging ahead of his first Men’s Fashion Week show in Paris. He also went to work on the brand’s defining signature material – leather. “I think it’s important that leather fits into society today,” he says. “And to do that, it needs to be lighter. We’ve done very digital techniques onto leather surfaces to give them more texture, and we deal with the material in a much more organic way.” As with everything in Jonathan’s world, he adopted an all-or-nothing approach to his creative directorship at Loewe. He spent the first year familiarising himself with the brand, moving the creative studio from Madrid to Paris and recruiting new members, who joined him in really getting underneath the skin of the house. For him, it was about moving the brand forward and taking it to new heights without disturbing its original DNA as a means to keep people interested. If his customers were able to predict the brand, then he was doing something very wrong. And that’s always been a forte of Jonathan’s – recycling the old and coming up with exciting new ways to move the fashion industry forward. “My biggest belief is that we work in an incredible industry and I am lucky to work in that,” he tells us. “I feel that the industry has to be fueled up. If you don’t fuel it up, it will become incredibly boring and that’s not why we got involved in fashion.” 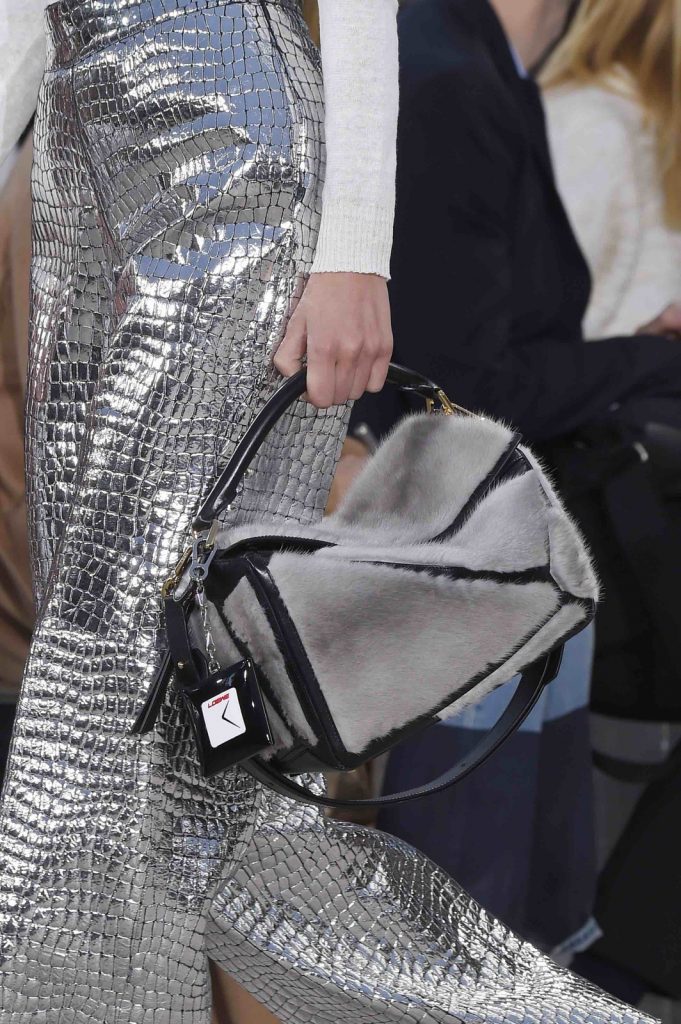 Always one to push boundaries, Anderson’s inaugural menswear debut for Loewe in June 2014 was a collection that kept a strong connection to the Spanish brand’s history with his abstract use of textures, cuts and well thought-through designs. At the same time, it was a nod to the provocative ideas of gender ambiguity that have the fashion A-list scrambling for the front row at his London Fashion Week show. “I can find inspiration from anything,” he says. “Honestly. I love to create. It’s what keeps me alive and it’s something that I’m addicted to – creating something and making something. I think it is the most fascinating thing one can do.” Think raw-edged, cardigan-like ponchos, fine-gauged knit sweaters and beautiful angular bags – even Pharrell Williams was quick to be spotted wearing Anderson’s Meccano Pink on the cover of his then-new single. It referenced vintage Ibiza style, too, with the designer saying that he “sometimes likes to go to periods where I was never born, because I feel like you are looking at it through a different lens. You’re kind of making it up and improvising what it should be. I feel like you have to take the best of the past and bring it forward into the current demographic”. 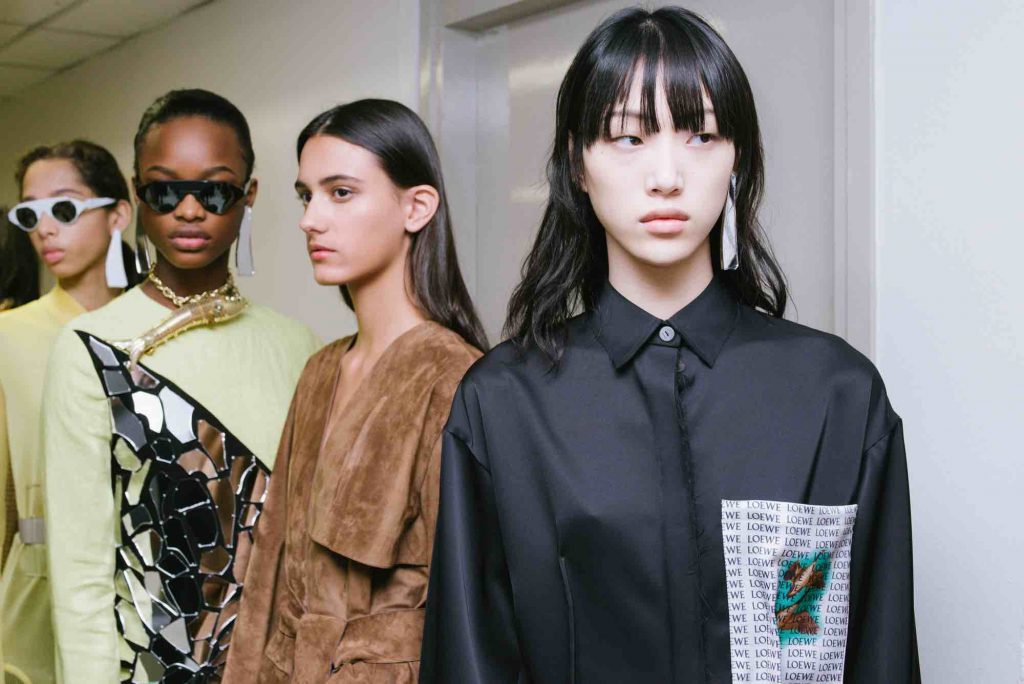 His first womenswear collection quickly followed in September 2014 at the UNESCO building in Paris, where guests took their seats around Isamu Noghuchi’s sculptural garden. A brighter, lighter and more daytime feel was the promise, with skirts slashed diagonally from the waist, and halter tops that came bound to the body and were reminiscent of the ancient Japanese art of Kinbaku. This was a collection that was all about texture, with carelessly-frayed edges and lashings of leather discovered from his time hunting through the Loewe archives. Reviews of both collections were mixed, with Anderson telling us that “it’s going to take many years to define who the Loewe woman is because in my head it is completely new. This doesn’t happen overnight and I think it will probably take us another five seasons to create the Loewe woman.”

Today, the Loewe brand has come on strong in both design and pop culture. It may only be his third womenswear collection for the label, but to say his most recent show for S/S ’16 (just one of the 10 he designs per year!) was surprising would be an understatement. So much so, that Jonathan went back to his experimental routes by going down the upcycling route. Fractured mirrors, metallic streaming, appliquéd poppers and lashings of plastic were in all in his repertoire, saying, “I wanted to take the ‘organicness’ of the first collection and the electricity of the second to merge a conflict of materials – the manmade and the natural. It had to feel a bit urban and I thought the plastic gave it this idea perfectly.” So, for a designer at the helm of two such differentiated brands, what are his current thoughts on the future of fashion? Apparently, and unsurprisingly, it’s going to be all about the digital and the social, with Anderson adamant that the industry needs to move forward to be able to survive. For him, it’s all about the content that’s created from each event and each fashion show, and how this is portrayed to the masses in an instant. And, with a new wave of designers heralded to take over the head honcho positions in the coming years – we’ve already seen the relatively unknown Demna Gvasalia take the reins from Alexander Wang at Balenciaga and we’re waiting with baited breath to see who will replace Phoebe Philo at Celine – does he think this is a positive change? “I think we are in a period where a younger generation is starting to appear and become slightly respected. I think that’s what’s changing here,” he tells us. “It’s about a younger demographic moving through a system and when that happens, it’s really incredible to see them coexisting in a period where social media has become so powerful.” We know for a fact he’d still like to see younger people in the industry, as he reveals, “I’d like to see my age bracket move up again. We need new viewpoints. The world has changed. The way people communicate has changed… it’s time for a generational shift. No-one is going to let 12-year-olds run the world, but you would hope that by 30, we could start.” We couldn’t agree more. 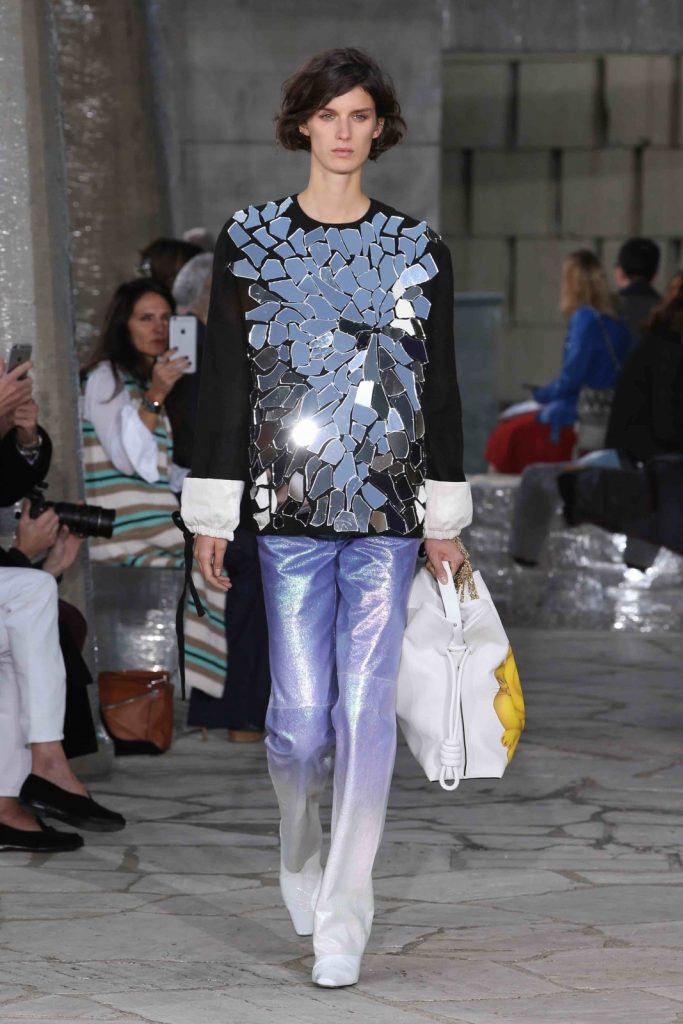