Deep, meaningful storytelling remains a constant motivator for Dubai- based designer Zaid Farouki, who made certain that the poetic tale inspiring his latest designs could not possibly be overlooked. When we meet, he accessorises his plain white T-shirt with bracelets and navy trousers with an embroidered waistband that reads: Sharqi.

The Arabic word translates to ‘Oriental’ in English – Farouki’s way of making an ironic, millennial riposte to the theory of Orientalism developed by Palestinian-American literary critic Edward Said, who argued that in the West, cultures of the Orient are depicted in exaggerated manners, and labelled as ‘the other.’

In his latest collection, created in collaboration with Arab poet Fatima AlSaad, Farouki turns the concept of Orientalism on its head and instead embraces the loaded term. “Entire continents have been blanketed with one word,” he tells MOJEH. “Now we’re re-claiming what it means to be Oriental.” 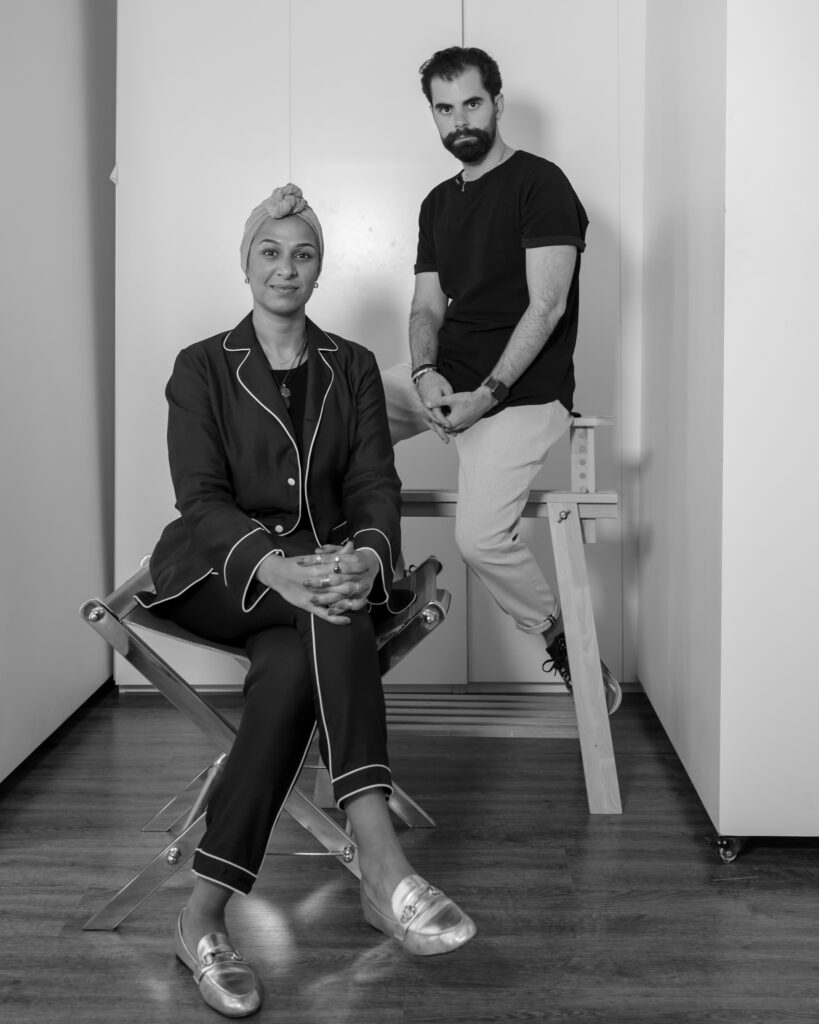 ‘I Am Sharqi’ is the name of the collection, which features Arabic poetry written by AlSaad, printed on silks and attached to T-shirts, jumpers and jackets, with certain verses embroidered onto sleeves, pockets and backs of collars. The poem tells of a journey towards discovering one’s identity, which is pre-written, and bonded to a lineage of ancestors.

“I’ve fallen from the cloth of my grandfathers,” is a rough English translation of the first line of the poem, which goes on to state, “ask me of my grandmother, for it is she who weaves the story of my being.”

While the Arabic script may only ‘speak’ to native Middle Easterners, AlSaad and Farouki tap into emotions that will appeal to many third-culture consumers: the poem talks of being “bewildered” and “alienated” in one’s own land, and “reclaiming” and “returning to” one’s origin.

AlSaad’s own heritage is Bahraini and Sudanese, while Farouki is Palestinian-American, and their partnership sends an important message about diversity, unity and community, in a region where Arab youth often battles with notions of identity amid pan-Arab politics, in addition to Orientalist and ‘Clash of Civilisations’ narratives frequently imposed on them by the West. 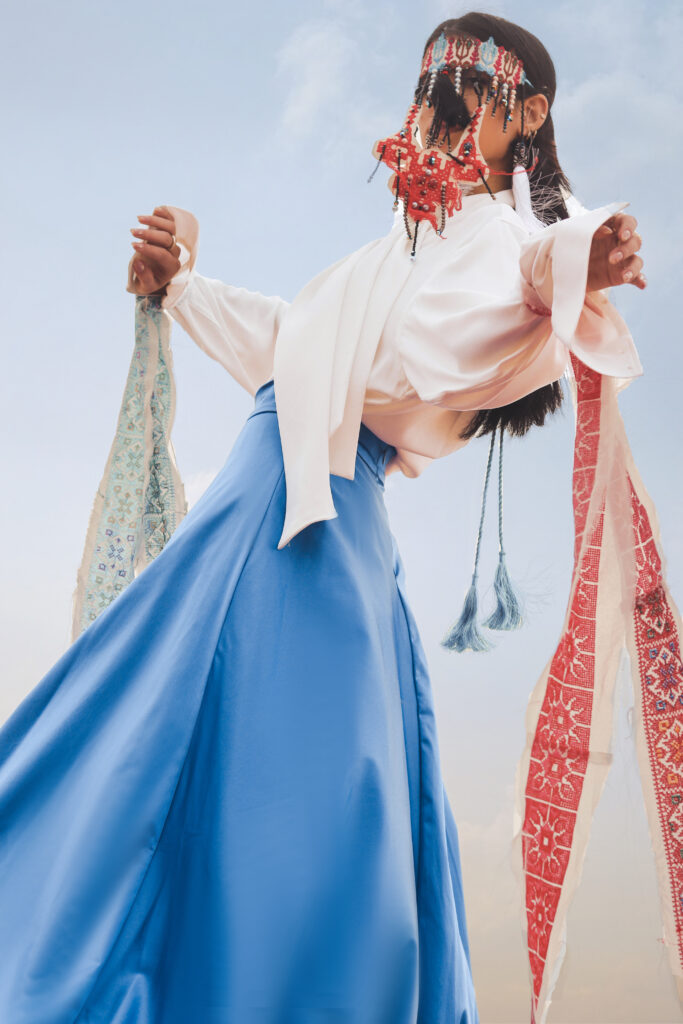 Exploring what it means to be sharqi was an enlightening experience, AlSaad tells MOJEH. “Opening up that question challenged me to discover new parts of myself. Poetry is an expression of identity itself, and fashion is wearable – to not just stand and be yourself but to wear yourself; wear your identity, and emotions,” she says.

AlSaad previously collaborated with Level Shoes in Dubai, but had never before worked so closely with clothing. “I use words the way he uses cloth,” she says, gesturing to Farouki, for whom ready-to-wear is also a relatively new venture.

His I Am Sharqi collection falls under the umbrella of ‘Zaid by Zaid Farouki’ – a RTW label and offshoot of his eponymous brand. The designer started out in the industry as more of an artist than a clothing maker – his label, in fact, began as a bespoke brand that created one-of-a-kind painted garments. 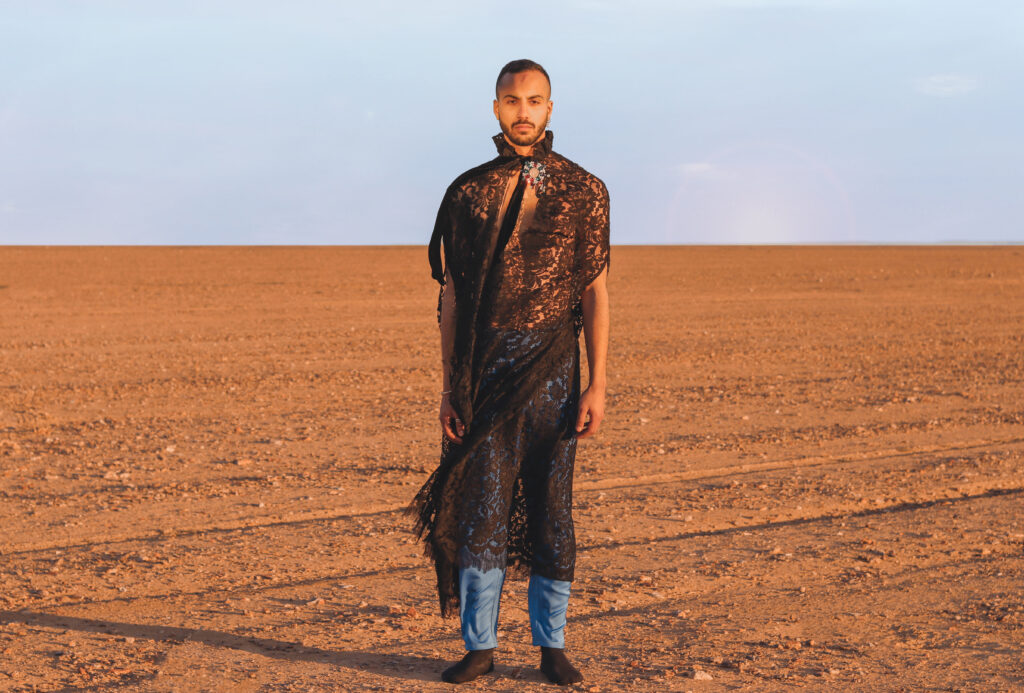 Zaid’s collections are designed to be unisex

“Instead of you buying my painting that hangs on the wall, you could buy my painting that you could wear. It’s just a totally different manner of consuming art,” he explains. “Moving to ready-to-wear was actually never part of the plan,” says the designer, whose first brush with the retail category came when he was approached by Mini Cooper Middle East in 2017 to design a capsule menswear collection. “That’s when we found there was a gap in the market for menswear designers, and that’s exactly what we do – it’s menswear at the end of the day, but women can wear it too; it’s all unisex,” he says.

To emphasise the versatility of his garments across both genders, an editorial shoot for the I Am Sharqi collection, produced by Jordanian creative hub Retailiér, shows photos of men and women each wearing the garments in different ways, questioning traditional gender roles and style norms.

In one image, a black suit is worn by both a male (who is bare-chested underneath), and a female (who is styled with a thick choker necklace crafted from traditional Palestinian embroidery). In another, the female wears a navy pyjama set with black heels and traditional Arabian male headwear, while the male wears his with an abaya-like robe.

“Never have we called a piece an ‘abaya’ – it’s just a ‘throw’ or ‘cover up’. That’s why it’s worn by both genders,” says Farouki, who adds that he’s inspired by the silhouette of the traditional male bisht, but modernises it with elements of deconstruction to make it a statement piece for both men and women, without any gender-bound characteristion.