When creative geniuses meet and work together, great things can happen. The world has always been grateful that John Lennon met Paul McCartney, resulting in most of The Beatles’ back catalogue, and even that Ben met Jerry, although our waistlines may beg to differ. In the world of fashion, we find other dynamic duos, such as Domenico Dolce and Stefano Gabbana, or Kim Jones and… well, insert name here. Jones is Dior’s artistic director of menswear, with an uncanny ability to lure the artists, brands and visionaries he is most enthusiastic about at the time. They are only too eager to work with him too, resulting in fabulous garments that exist outside of current trends. 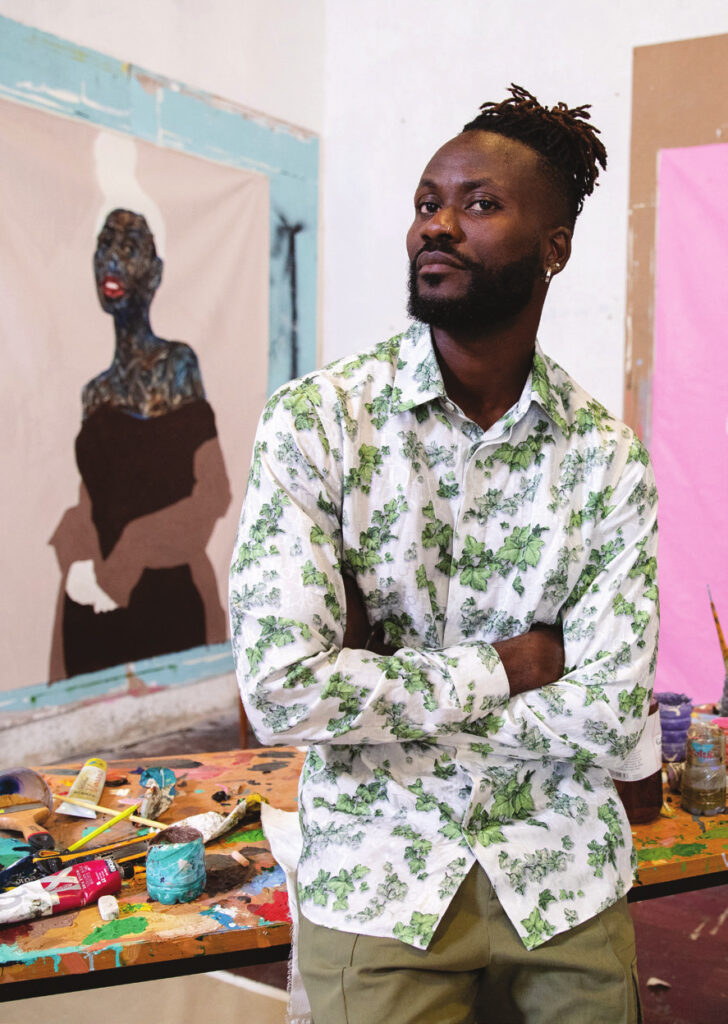 For Summer 21, Jones has joined forces with 37-year-old Ghanaian-born, Vienna-trained artist Amoako Boafo, known for his figurative pieces and vibrant palette, with his paintings transported onto Jones’s distinctive silhouettes. A rising star in the art world, Boafo recently completed a residency in Los Angeles, with his work now fetching large sums at auction. Why was Jones drawn to Boafo’s work? “The African continent inspired my love of culture and nature,” he explains. “I was born in the UK, but grew up in Africa, travelling across Botswana, Tanzania, Ethiopia, Kenya and Ghana, so it’s always been important to me. You look around and see so much beauty, diversity and history in each country, along with traditions passed down through generations. “And then you have the style, from Afar tribesmen to Maasai warriors, with West and South Africa always bringing back memories of colour, prints and music for me. I always felt uplifted seeing this, and my experience with Amoako Boafo has brought back many happy memories and nostalgia. I first met him in Miami in 2019 at the Rubell Museum, introduced by owner Mera Rubell, across from where the Dior Fall 20 men’s show was being held. There was a great mutual respect of each other’s work.” 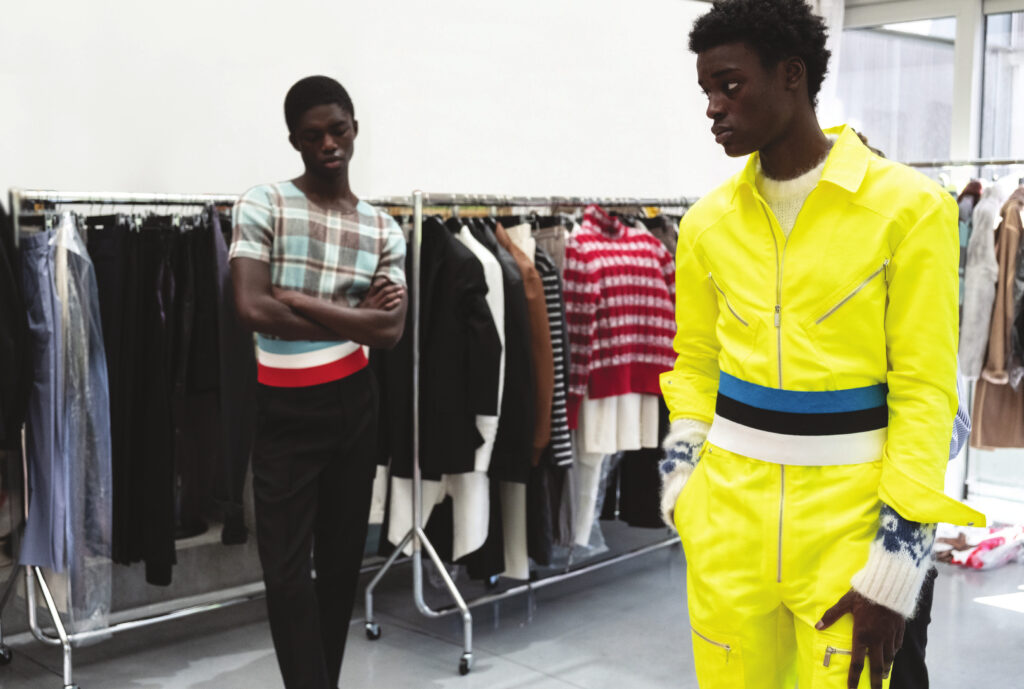 A year later, in July 2020, Jones was ready to debut the pieces that had emerged from this meeting of minds. Rather than a physical catwalk show, due to the restrictions of the pandemic, Dior released details online in a suitably impactful way. With a two-part film, entitled Portrait of an Artist, still available to view on YouTube, directed by Aphex Twin collaborator Chris Cunningham and visual artist Jackie Nickerson, Jones was able to reflect both sides of the partnership. “I had dreamed of working with an African artist at Dior for quite some time,” he says. “I wanted this to be a fully immersive collection, as it’s so close to my heart, and to find an artist that we could interpret so strongly, bringing their paintings back to life in a couture way. So we came up with the idea of a video in two parts. The first is a documentary-style studio visit, edited and soundtracked by video artist Chris Cunningham, with images shot in London and at Amoako’s studio in Ghana. The second is a soft-focus fashion film that unveils my creations, directed by Jackie Nickerson.” 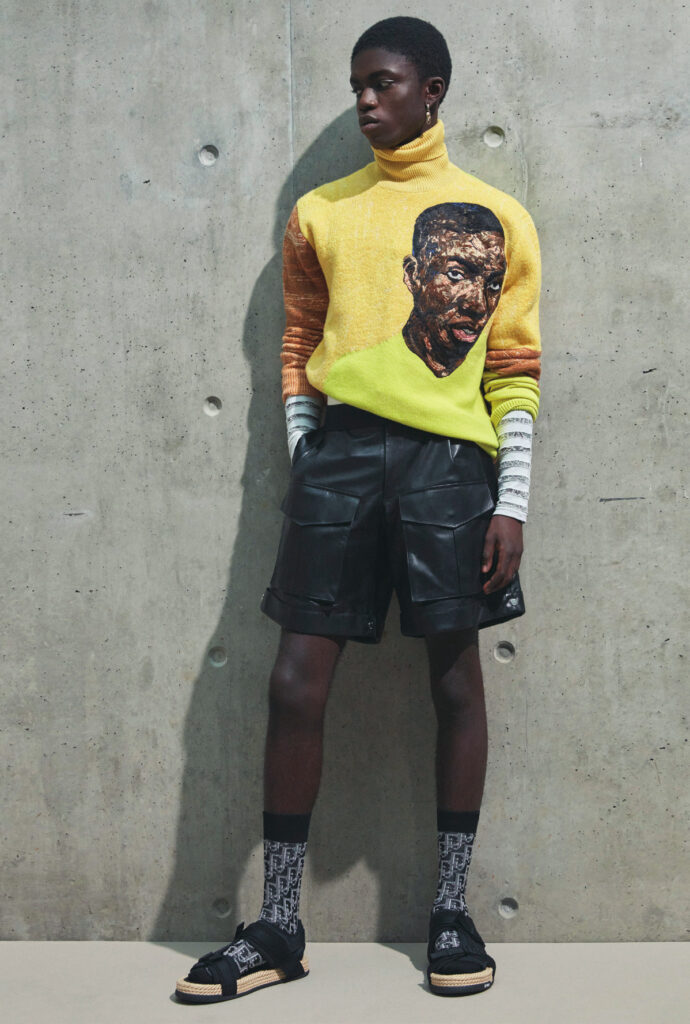 A painted face on yellow pairs with black leather shorts

Those creations are certainly memorable. Boafo’s vibrant Black Diaspora portraits are explorations of his own identity and black masculinity, often created using his fingers as well as brushes for an added personal touch, and forging a connection with Dior’s passion for handicraft. Jones has reproduced the images both literally and metaphorically onto a range of challenging fabrics – an ivy print embroidered on silk ribbed knits; a figure rendered in passementerie, often used as a decorative trim, now featured prominently on a brown leather jacket; and a man’s face transported to a fur turtleneck, among others.

The colours are drawn from Boafo’s vivid, near-surreal hues, with powerful yellows, blues, corals and greens. In some cases, Jones has even managed to echo the textures of the paint and canvas, with the images coming alive as they might in a gallery setting. The celebrated use of colour, and the occasional inclusion of florals, are common ground for both Boafo and Dior, with marinière stripes, Dior Oblique embroidery on tulle and other trademark staples of the house making an appearance. 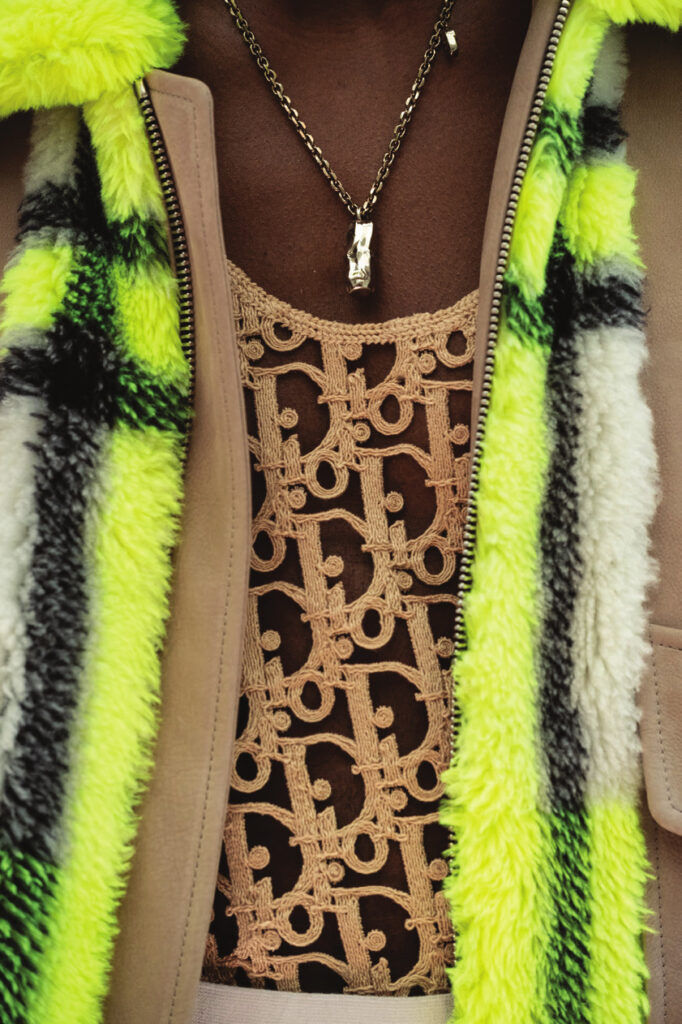 Material innovations are also evident, such as the leather Bermuda shorts, black crocodile leather and wool safari jacket, and the white silk marching band coat. The high-waisted shorts with an inseam and cumberband, and bright jumpsuits, are among the other surprises. “All of the looks fully embody the spirit of the collection,” Jones continues. “I really love every single one, and see it as a whole rather than one or two important pieces.”

The Dior creative director also explains how the ideas took shape. “It all started with the idea of ivy – a famous dress that Christian Dior designed in the 1950s, and a special creation embellished with an ivy belt and parure,” he recalls. “When I visited Amoako in Ghana, he had just finished a piece that featured a guy in an ivy shirt, so we talked about textures and prints, and using the patterns from his work to bring the portraits to life.”

Jones has also had to think about the accessories, from bags and hats to jewellery. “Immaculate tailoring is still the core of the collection, but everything has a lighter and sportier feel to it this season,” he muses. “It’s really about capturing the spirit of each character in the paintings, but the custom jewellery we have is quite minimal, and plays with gold and silver together on the same piece. We have a new Christian Dior link line with gold, silver and enamel, to give some depth and texture to the palette.” 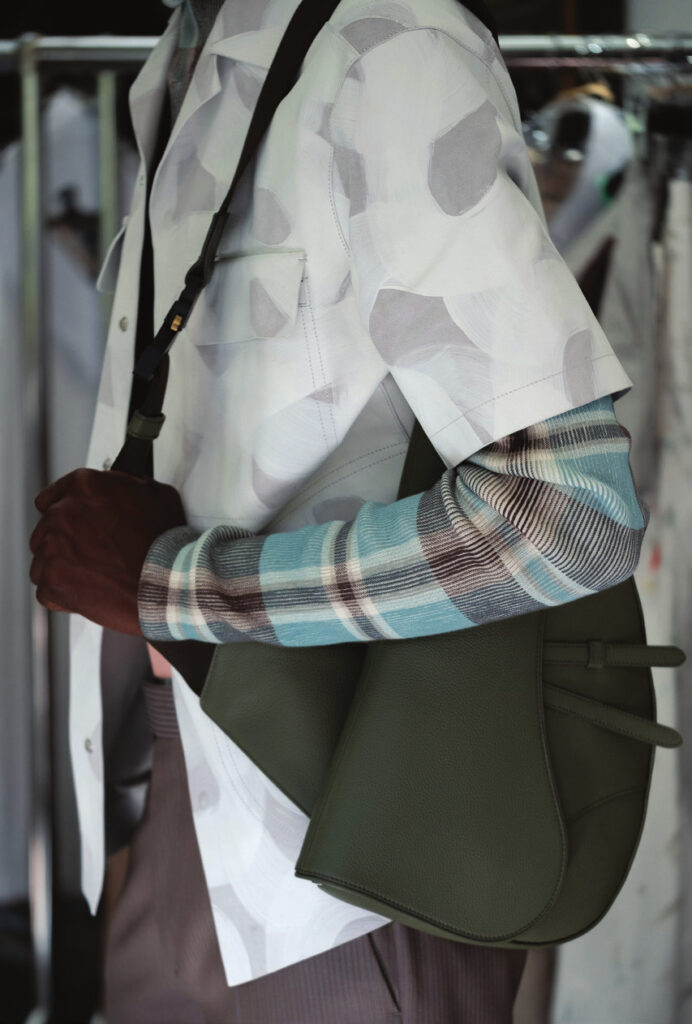 It was at Dunhill, then Louis Vuitton, where Jones made his mark before moving to Dior in March 2018 – he was also recently appointed as artistic director of the women’s line at Fendi, another luxury brand with ties to the LVMH group, like Dior, and a role formerly occupied by the late Karl Lagerfeld. So has he always found himself drawn to collaborators, such as Boafo? “Even without a major artist involved, it’s still a collaboration, working with the studio, the designers and others at Dior,” he says. “Your goal is always to make exciting products for the consumer, and my favourite thing is seeing people I don’t know wearing my clothes – even in Dubai on Instagram. I suppose what draws me to the artists I end up working with is their confidence, with bold pieces that really make an impact.”

This seems true of Dior’s Fall 21 collection, shown recently, which is a collaboration with Scottish painter Peter Doig. Here, Jones was inspired in different ways, with animal motifs, military-style jackets and thigh-hugging boots the shape of things to come. “We looked with Peter at the idea of ceremonial dress, coming up with a modern interpretation of it, with a real focus on tailoring,” Jones explains. “There’s also an upcoming collaboration with US artist Kenny Scharf, who I felt evoked a similar sense of energy and fun as Christian Dior when he originally founded the house.” 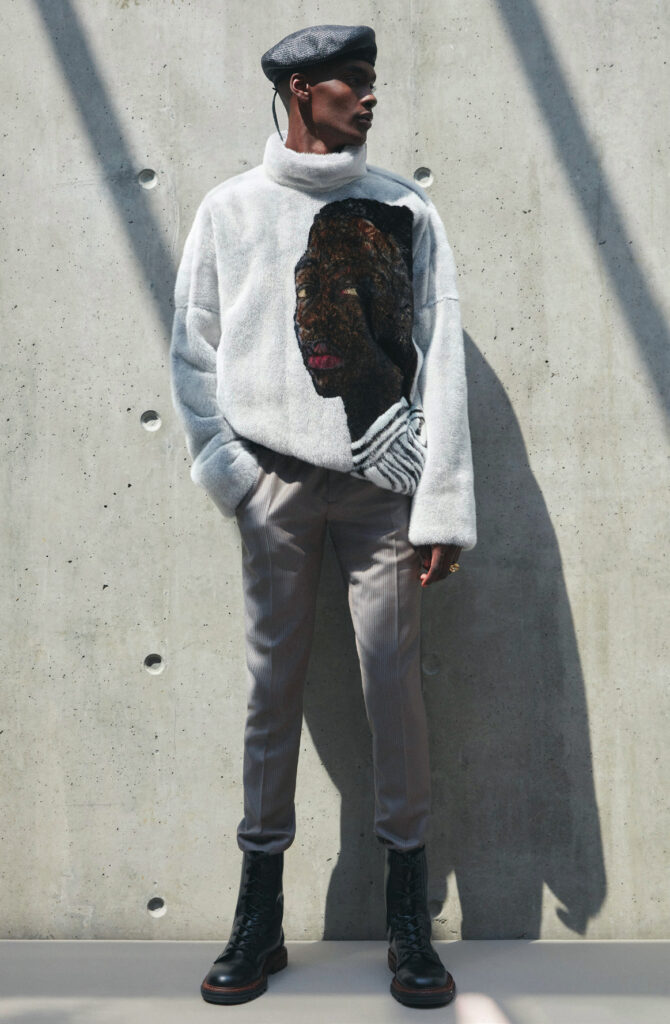 The beret and grey fur turtleneck gives a militaristic vibe

This constant meeting of ideas between Jones and whoever he decides to collaborate with next must surely make working during the pandemic easier. “London is where I was born, and where I continue to live and work, with all of the Dior collections drawn at my Harley Street office,” says Jones, with the city in lockdown again at the time of writing. “The creativity and innovation that have come out of this period have been very interesting. There are so many people exploring alternatives to the way things were being done. If you break the tyranny of the fashion calendar and you find technologies that express what you want to show or tell people, there isn’t any reason why they shouldn’t be available all the time, with an ongoing dialogue between yourself and the rest of the world.”

Perhaps this time can present an opportunity to reassess. For Jones, as well as pursuing new collaborations and collections, he is able to reflect upon the responsibility of his role as one of the true leaders and innovators of the fashion world, particularly in terms of sustainability. “The preservation of the world’s natural environment and beauty is fundamental to my creative vision,” he stresses. “I believe that it’s my responsibility to try and find more sustainable and creative solutions in my work, so that future generations have the opportunity to see the world as I have seen it.” This is a view that travelled with Jones to Dior, and has helped to shape his collections since his arrival three years ago. “I want it to become fresher, very chic, very sophisticated, more relaxed and joyful,” he says of his thought process when approaching a new range. “I also want to continue in this direction of surprising people, making collections very couture, very Dior and very desirable.” And no doubt he will continue to take some very big names from the art world along for the ride. Africa this time, the US and Scotland next. With Dior and Kim Jones, there really is no telling where you might end up. The Dior Summer 2021 collection is available now on dior.com

Read Next: Dior Has Launched A Ramadan Collection That Is Exclusive To The Middle East