In a four-part series, MOJEH highlights four women who share their love for the designers that feed their imaginations and fill their wardrobes…

An avid supporter of emerging brands, especially those built in the Middle East, Joud Al Aswad has found herself in Emirati designer Madiyah Al Sharqi.

“I first got introduced to Madiyah in 2013, which is around when she first started,” explains the 26-year-old project manager who lives in Dubai. “I think today I own about seven or eight pieces that I’ve collected over the seasons – long and short dresses, super delicate tops and skirts, and statement pieces that I like to reserve for special times. They’ve sort of become keepsakes because her designs are unlike any other brand I’ve encountered,” she explains.

Since then, the young brand has progressed immensely, its design aesthetic moving in a more contemporary direction in response to the needs of today’s woman who craves more simple and modern silhouettes.

This progression was a turning point for many young women in the region, who just like Joud, were searching for “something very feminine but also very contemporary and wearable,” she says. “I think a lot of us, especially the brand’s fans from its earlier seasons have always only thought of it for its formal lace gowns. But I worked with the brand briefly, and it was during the season when Madiyah transitioned to incorporate a lot more separates that you could throw on for the day, and learned to appreciate it so much more. I learned I could also wear ready-to-wear pieces that didn’t call for a formal occasion.” 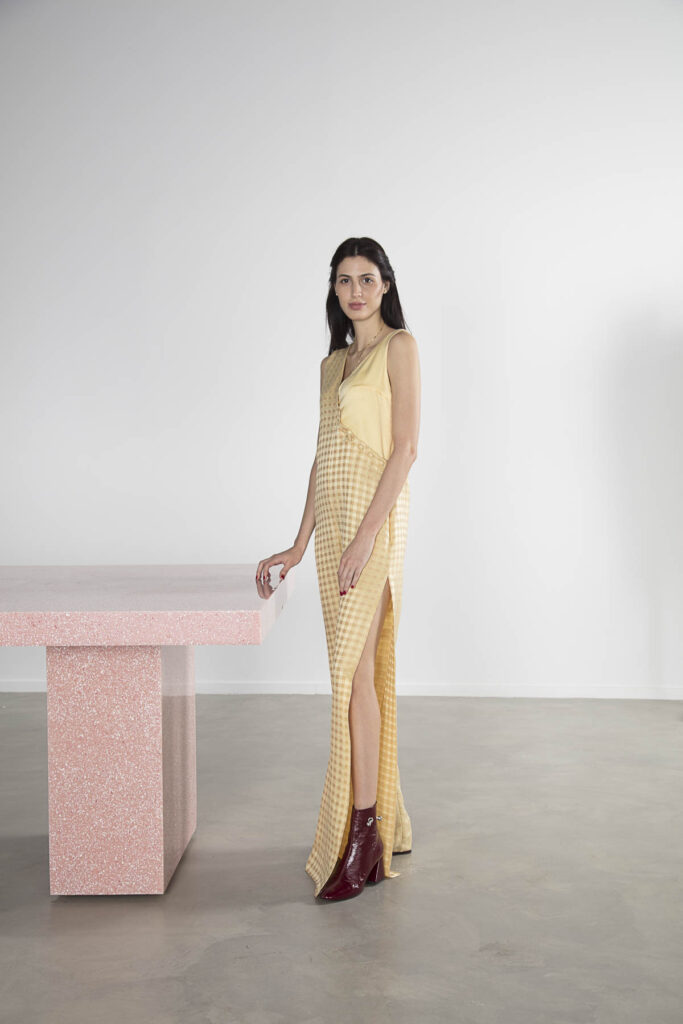 With a style heavily in influenced by her mood, Joud loves to mix up her wardrobe and play around with different looks, something that she can do with Madiyah’s pieces, ones that although have shifted aesthetics, are still just as versatile as when they first launched.

“S/S17 may be my most favourite. It was the collection where the models wore the clothes styled with baseball caps and over-the-knee boots,” she explains. “It was still signature Madiyah Al Sharqi – with the lace, beading and ultra-feminine accents – but the turning point was the styling, and it showed how accessible her pieces could be. Something that one could easily include in their everyday wardrobe.”

Her closet favourites include a top with dramatic big sleeves and a silver miniskirt, her first ever purchase from the Emirati brand. These days Joud loves experimenting, and is all about mixing her different Madiyah pieces.

“Today, I’m wearing a tee that says ‘namaste’ with ‘mas’ in a different colour, a play on Madiyah Al Sharqi’s initials,” she says. “I learned that the S/S19 collection was inspired by Jackie Kennedy’s trip to India in 1962 so ‘namaste’ was a tribute to that.”

“Another one of my favourite looks has to be the jumpsuit with the long slit down the side (pictured above). What I love about Madiyah’s designs is that there’s always something young and playful about them,” explains Joud. Her favourites are also standout looks from the brand’s S/S19 collection, which “are subtle enough to wear for work, out with friends, or on holiday,” according to Joud.

Now, take a look at Hollywood’s most powerful stylists in 2019.