The Met Ball Head-turners: Who Wore What 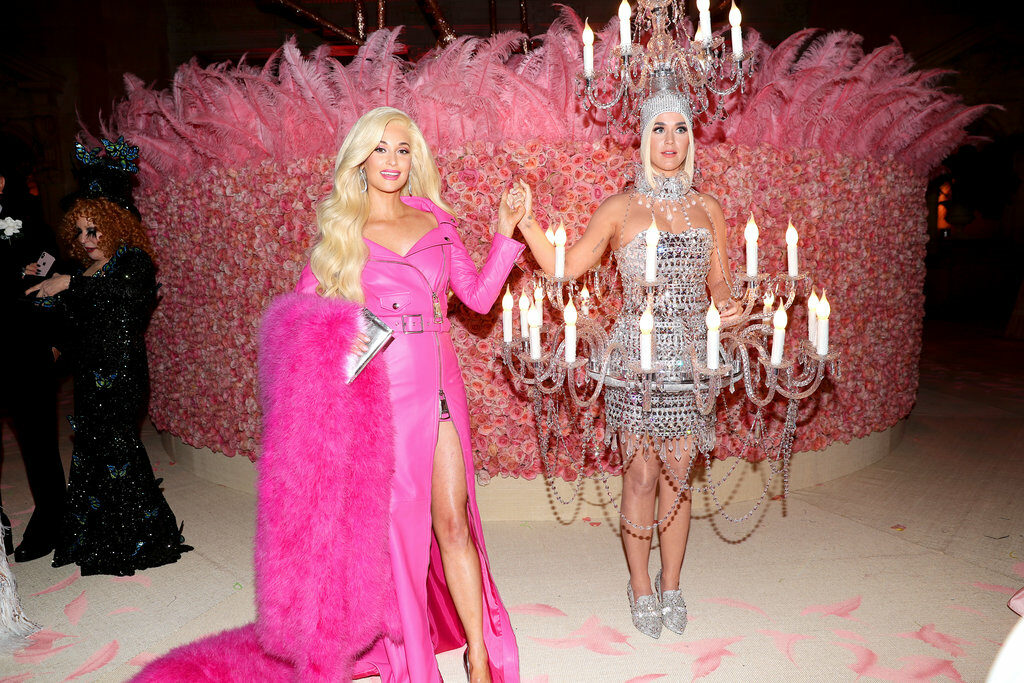 It’s one of the biggest nights in the fashion calendar – and this year’s Costume Institute Gala at New York’s Metropolitan Museum of Art is set to go down as one of the most spectacular in the event’s history.

Drawing together the cream of the fashion, film, music and art worlds to raise money for the Met’s Costume Institute, the night celebrates the theme of the museum’s latest exhibition; this year titled Camp: Notes on Fashion. And while previous Met Galas have sometimes left us feeling a little let down, sartorially speaking, the 71st edition of this legendary extravaganza was a magnificent eye-popper of a pink-carpeted fashion moment in every sense of the term.
From Katy Perry’s fully-working Moschino Candelabra; Cardi B’s giant couture duvet gown and Zendaya’s real life Cinderella transformation to Lady Gaga’s quadruple-threat Brandon Maxwell look and Jared Leto’s literal Gucci head-turner, MOJEH spotlights every flashbulb-fabulous minute of this year’s astonishingly entertaining Met Gala. 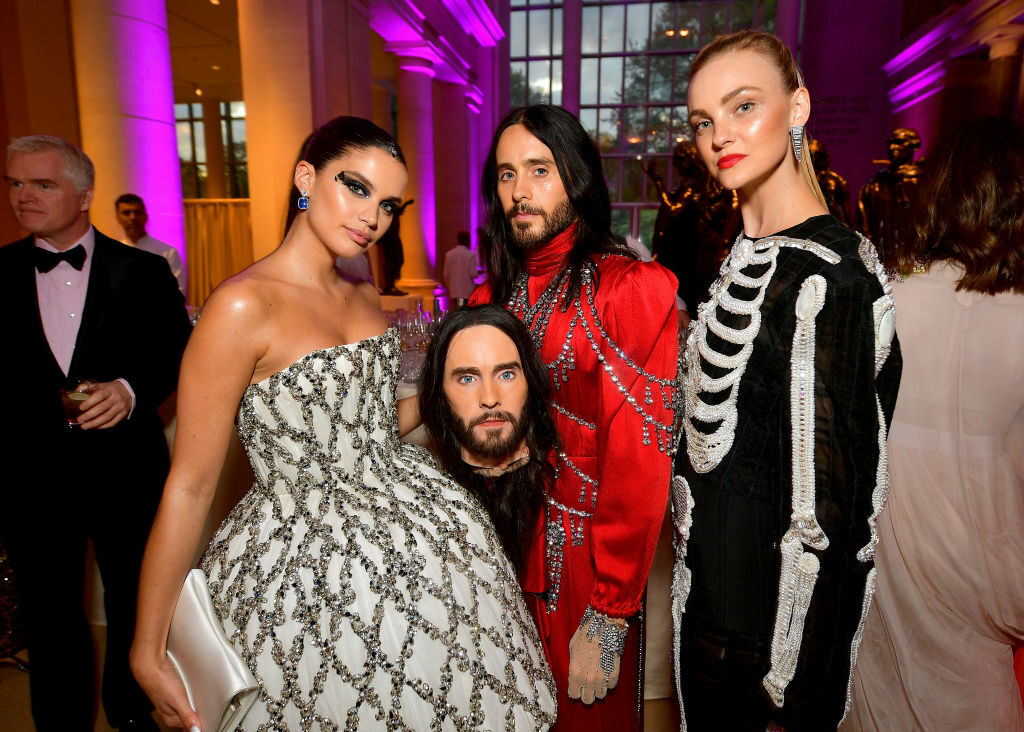 Look away for a second, and you risked missing some of the finest fashion displays we’ve seen on this year’s red – ahem, we mean pink – carpet.

Distilled into a variety of incarnations of the night’s theme – referencing influences that spanned everything from classic Disney movies to Liberace and the heyday of Studio 54, when it comes to nailing the 2019 dress code, the Best Dressed guests at this year’s met gala were as Camp as could be. Leading the charge? Katie Perry, who quite literally lit up the pink carpet in Moschino. Rocking a fully-working double-tiered candelabra gown from Jeremy Scott’s 2016 collection, the never-afraid-to-overdo-it singer changed into an equally show-stopping ensemble for the after-party (or should that be after-patty?) showing up to in a dress disguised as a hamburger. Obviously. 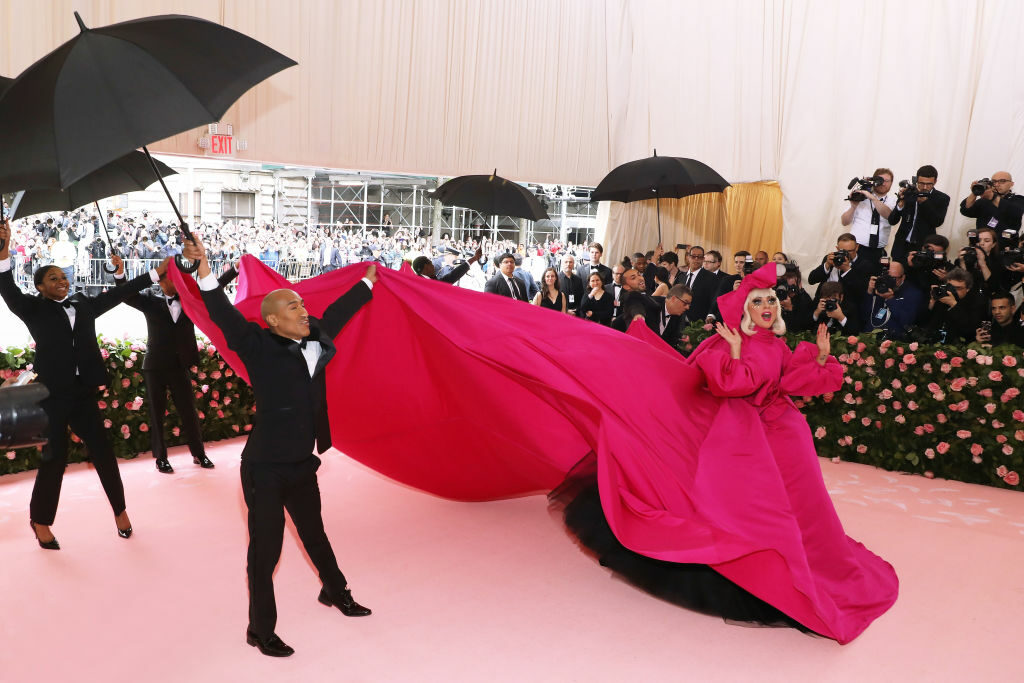 Lady Gaga put on quite the performance in a multi-layered Brandon Maxwell gown, stripping off layer by layer as she climbed the infamous steps at The Met.

Speaking of outfit changes, the recently rather sartorially subdued Lady Gaga returned to her headline-grabbing best by rocking not one but four looks by Brandon Maxwell. With serious haute-couture outfit history behind her – we’re talking the meat dress, the arriving in an egg thing, the armadillo shoes, the orbit gown, the Kermit coat, the latex Nun’s habit, the list goes on  –  the award-winning singer and actress hit the pink carpet in a huge, voluminous fuchsia silk coat, which trailed behind her all the way down the entrance staircase. Slipping off the coat to reveal a voluminous black-strapless gown, complete with bustle and accessorised with a black umbrella, this was then discarded to show off a slinky hot pink column gown, before finally revealing all in black underwear, holdups and glittery double-platform ankle boots. Yep, Lady Gaga is most definitely back with a vengeance. 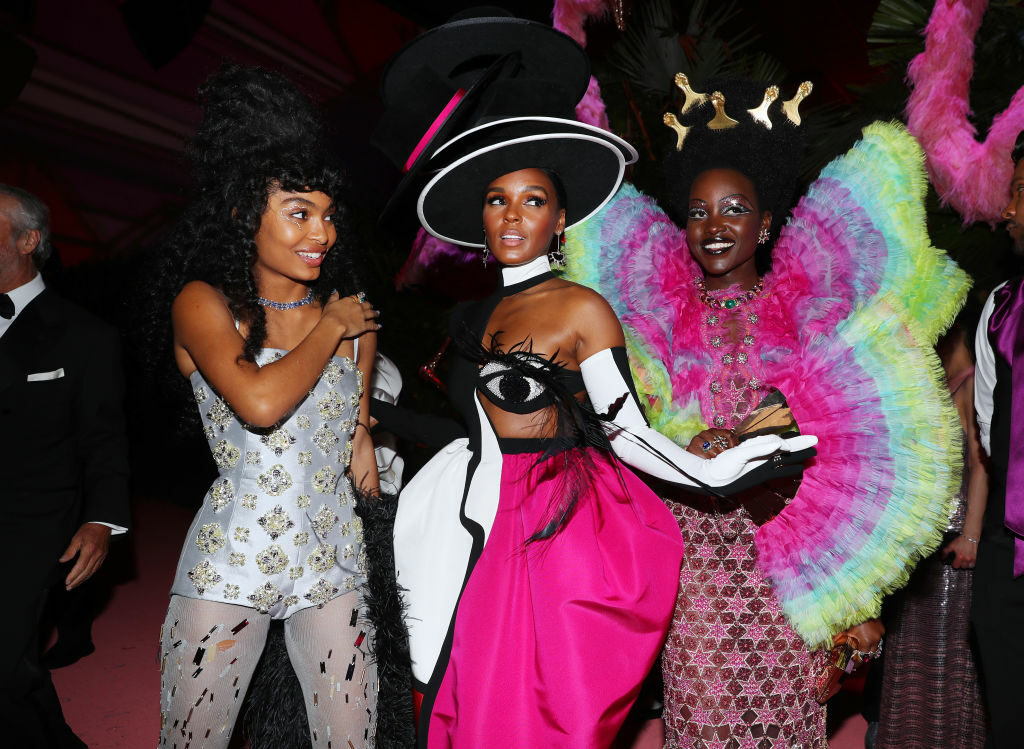 Sticking to her signature monochromes, Janelle Monae was a walking work of art in her custom Christian Siriano gown. Paying homage to one of Janelle’s favourite artists, Pablo Picasso, the abstract face tulip-shaped gown included a blinking-eye bodice complete with feathered eyelashes, and a matching eye-shaped minaudiere, topped off with a precarious -looking stack of four hats. 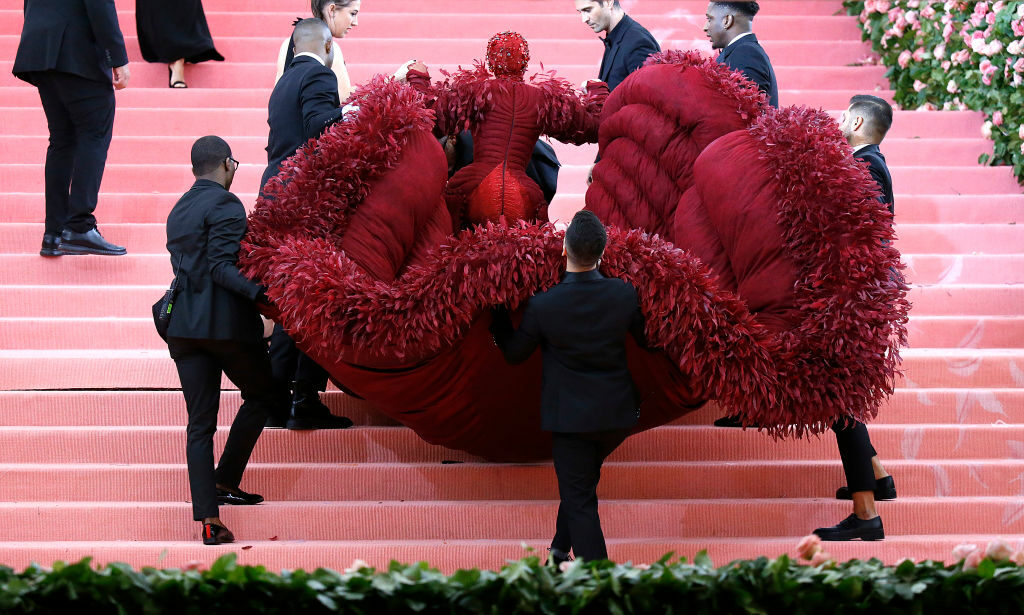 A back view of Cardi B’s magnificent Thom Browne gown that took 35 people more than 2,000 hours to create (Photo by John Lamparski/Getty Images)

Equally artistic, Cardi B practically made the Met ball her own personal boudoir, in a spectacular quilted silk and organza feather-down-filled gown by Thom Browne. Requiring a ten person entourage to arrange the train of concentric circles that extended more than ten feet behind her, the hand-embroidered dress was decorated with 30,000 burned and dyed coque feathers, took 35 people more than 2,000 hours to create, and was finished off with a bugle-bead headpiece that Browne made in collaboration with milliner Stephen Jones. 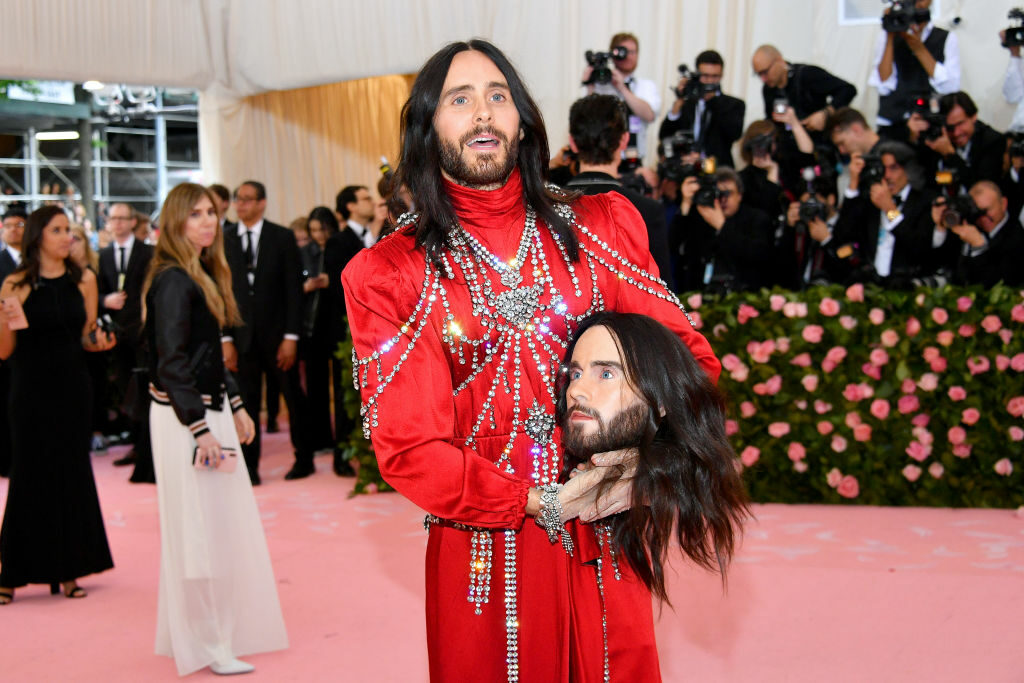 Not wishing to be outdone by the female guests, Jared Leto managed to steal the show with his flowing red diamond-encrusted Gucci number. And, proving that two heads are almost certainly better than one – particularly when it comes to grabbing column inches – topping off his scarlett, gender nonconformist gown, the actor and singer carried a clutch bag made in the likeness of his own severed head, first seen on the catwalks of Gucci’s AW18 show.

And that was just the start of it. See the best of the rest in Mojeh’s gallery below… 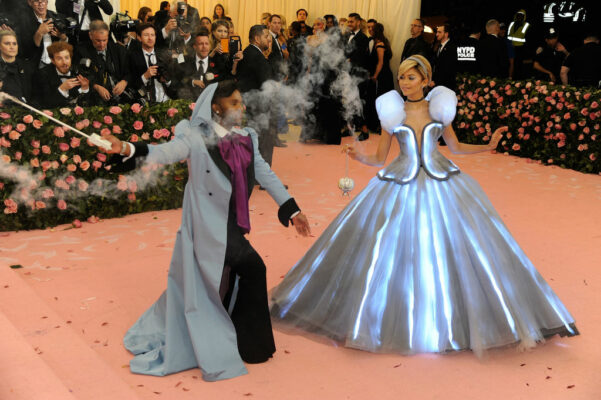 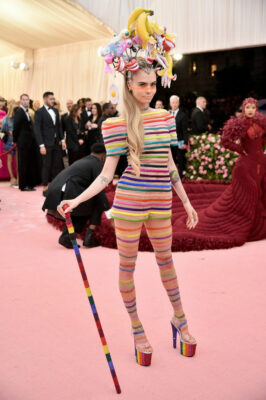 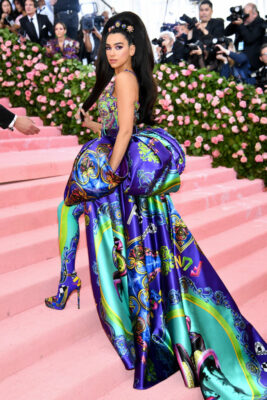 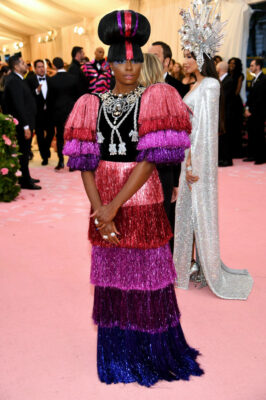 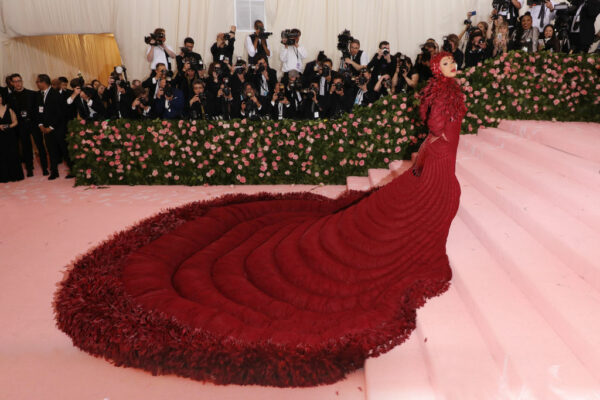 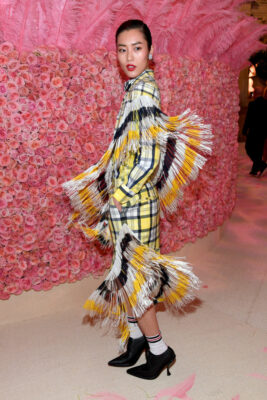 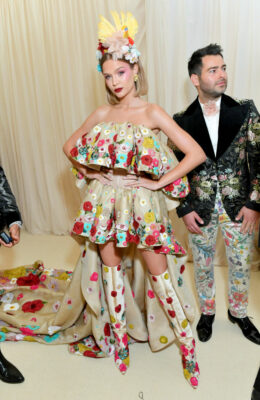 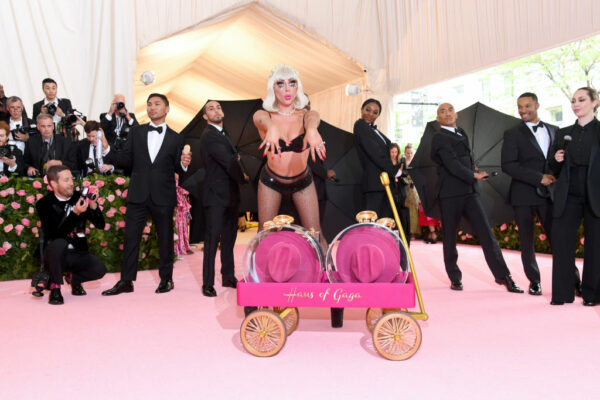 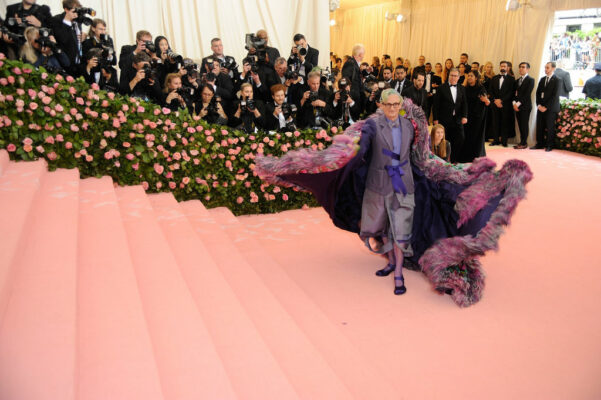 Phoebe Philo Returns To Fashion With An Eponymous Label

Hotting Up: How to Wear Orange Now