SS20 Haute Couture: All the Fashion and Fantasy from Day Three

From patchwork dresses to fanciful silhouettes, here are the dreamiest highlights from day three of Paris Couture Week 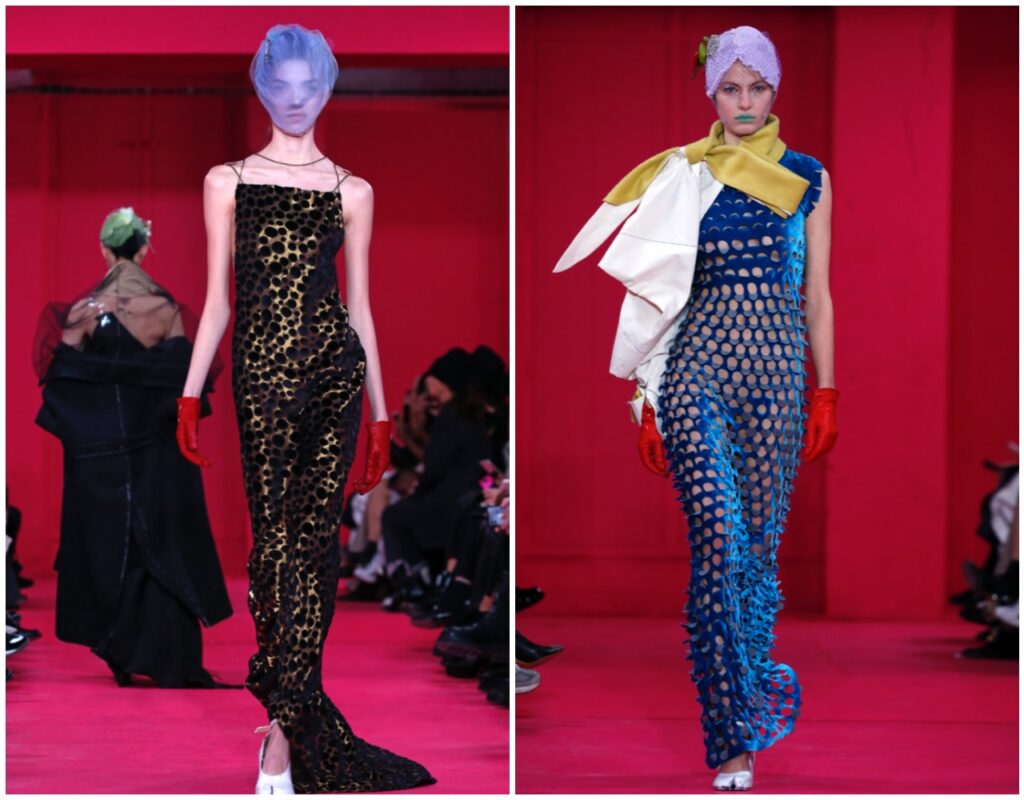 MAISON MARGIELA
The avant-garde brand’s ‘Artisnal’ Co-ed show ‘A memory of…’ with creative director John Galliano saw models walking the runway with an unrivalled attitude, and to a soundtrack that featured Julie Andrews singing the Sound of Music. Dresses constructed from fabrics perforated with holes, headgear made out of fruit and vegetables – it was tongue and cheek to say the least. But it was a play on consumerism.

As well as his wealth of design experience, which was evident in cuts and tailored – albeit deconstructed – coats, the team were encouraged to rummage charity shops for inspiration and basic fabrics like muslin were given couture treatment. He said in his podcast released on Apple Podcasts, “Now we are inspired to fulfil the demands of an ethical conscience. Luxury nowadays is being able to buy something that fits those ethics.” 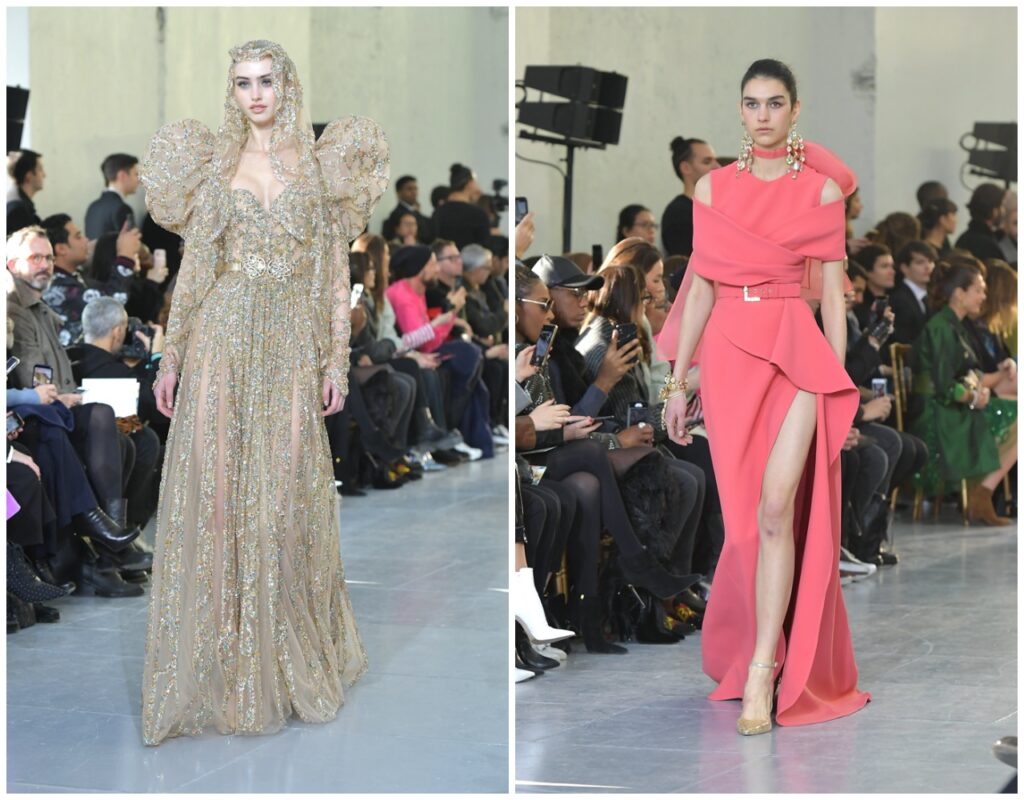 Elie Saab’s Haute Couture Spring Summer 2020 collection intertwines the regal past of both Europe and Mexico, bringing them together in the present. The collection was “daring and charming, bold and graceful yet always refined” and while every look was dramatic in its own right, it seemed a collection of two styles – one half covered in lace and embellishment, the other celebrated singular colour by pleating and folding satin into a grand va va voom-style gowns.

Opulent metallics dominated, while the odd look in turquoise, lime or coral provided a welcomed point of difference. The Lebanese designer also exhibited rich satin full-length capes on top of sculptured, sequin-strewn mini dresses, and shoulders were blown up and ruched to offer volume. 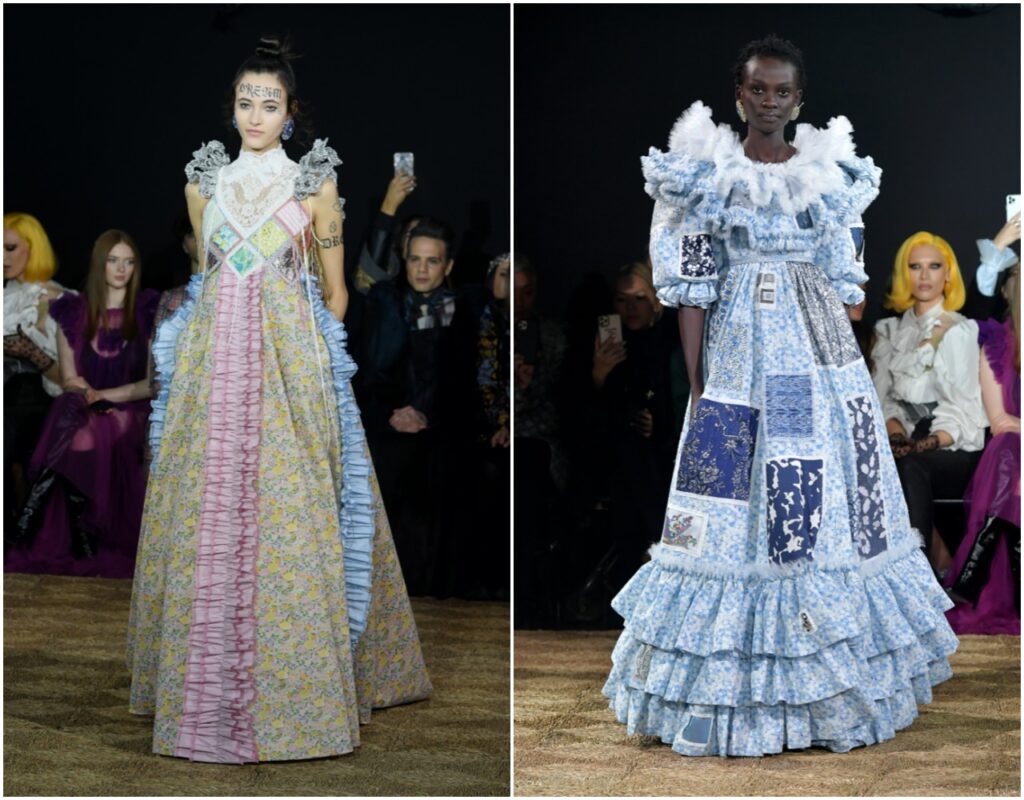 Fashion really is taking its social conscience seriously, and the most lavish and frivolous shows on the circuit were no exception. Viktor & Rolf titled their show ‘Patchworks’ and it revolved around the idea of “doing more with less, and constraints providing a stepping stone to meaningful creation”.

Here the Dutch design duo turned to their archive for fabric samples. Pulling tiny pieces of fabric that had sent to the house throughout the years – they selected some of the most luxurious fabric samples from those archives, and patched together, they made up this collection. They cleverly manipulated them into patchwork dresses trimmed with froth and frills. Models also accessorised with bags made from Vegan recyclable plastic. 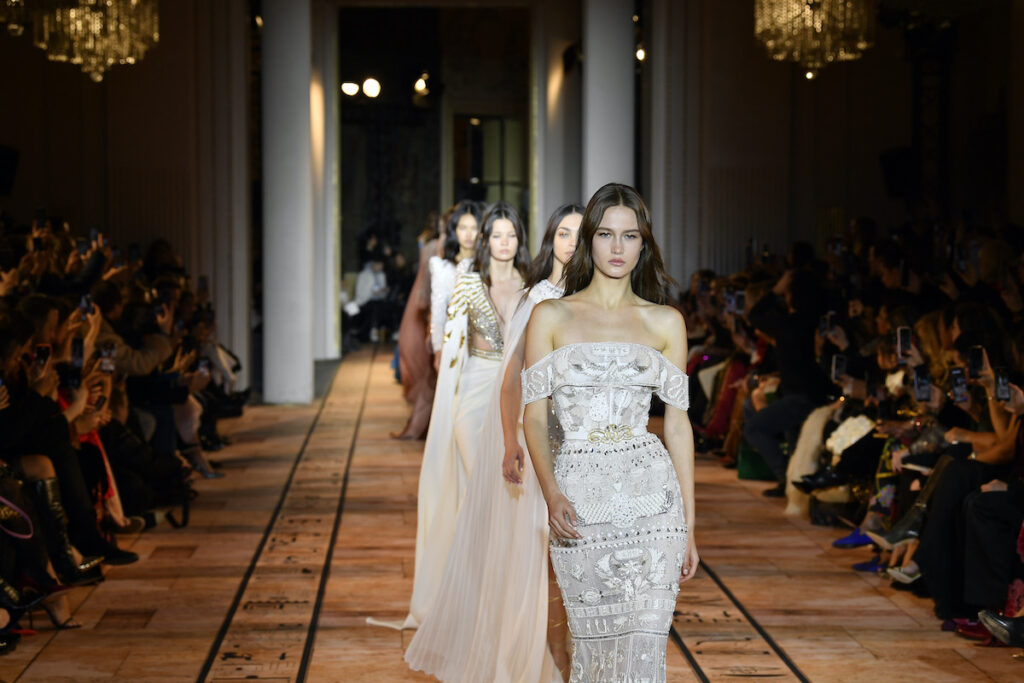 ZUHAIR MURAD
There’s something reassuring about Zuhair Murad’s collections, they seem to stay true to the fanciful, luxury, and high octane glamour you expect to find at couture. While a slew of beautiful dresses paraded the runway, Egypt seemed to be the inspiration with Cleopatra the heroine of his story. The bride transformed into an Egyptian queen in a dramatic white embellished gown and cape with Cleopatra-inspired jewelled hair.

Elsewhere he catered for showy girls with an overtly sexy thigh-high dress – it also had a tail of pleats at the back and cut-out details framing the cleavage. A rich red gown seemed more classic Hollywood, its sequins streaked in harmony with the models curves. Whatever your fairytale or fantasy, there was something here for every woman – these dresses were all created to beautifully accentuate and flatter women’s bodies and curves. 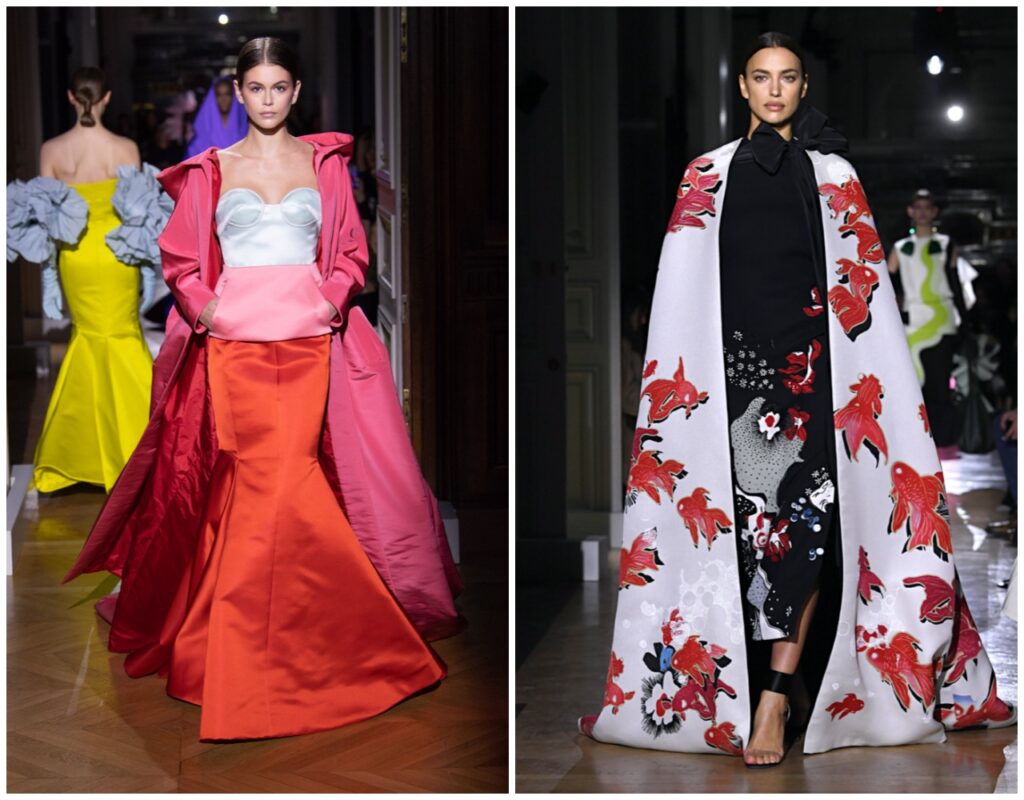 VALENTINO
Valentino paid tribute to its Artistic Director Pieraolo Piccioli and all the Atelier makers in the notes issued after the show. “Dreams are the result of the subconscious – a mystery, hidden from the external world. Being a dream itself, Couture is the result of gestures, techniques, fantasies that rarely are revealed. It is defined by these secrets, handed down in the making, by the makers,” they said.

All the detail and precision of couture was put into play. Silhouettes were slim and neat, long and vertical – and described as “somehow archetypal of what Couture is in terms of shapes, imagery and almost alchemic transformation of the materials”. It was an undeniably strong collection. From the structured cuts and the dramatic bows, to the colour palette of blacks, white, and reds – the idea was apparently not to solve the mystery of dreams, just beautifully uncover it. 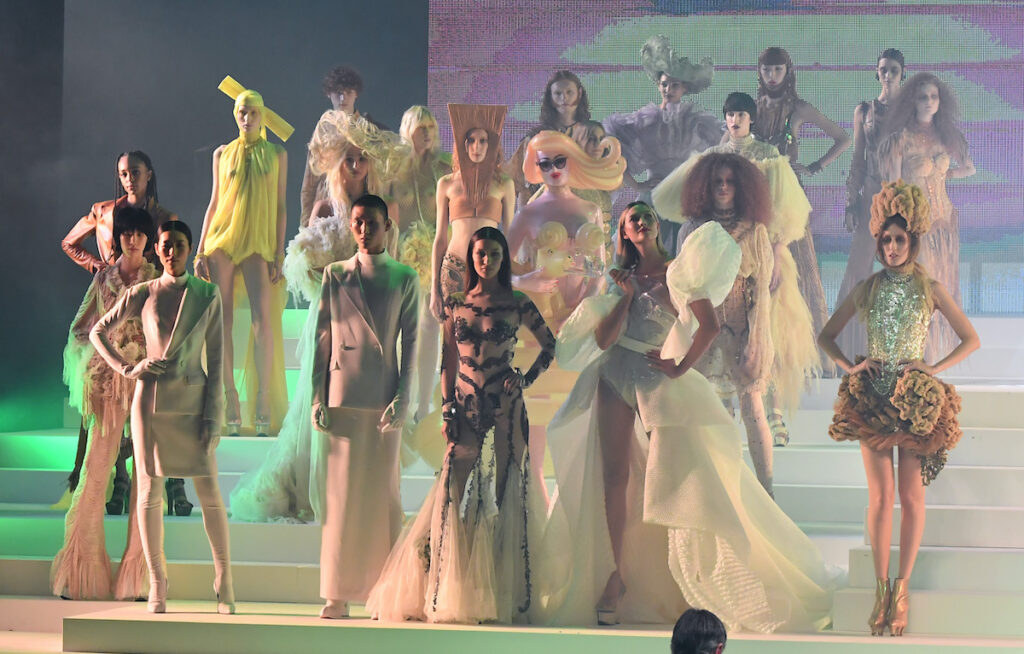 JEAN PAUL GAULTIER
After a career that has spanned 50 years – Jean Paul Gaultier was just 18 when he started at Pierre Cardin – the L’enfant terrible of fashion announced his retirement just before his Haute Couture Spring Summer 2020 show this week. Posting a video on Twitter and Instagram to release the news, the designer promised that “Gaultier Paris will go on” — and that he has “a new project” brewing which will be revealed “very soon”. His final send off was full of the eclectic style, theatre and flair we’ve come to expect.

An A-list cast of models paraded the runway including Karlie Kloss in voluminous white, Coco Rocha in pink frills, Bella Hadid in black and Gigi Hadid in a typically JPG sailor-inspired piece. Dita Von Teese and Irina Shayk wore corested pieces, Paris Jackson made her runway debut in as a bohemian goddess, and the former Miss France Iris Mittenaere wore a cocktail dress version of France’s flag. The show ended with rapturous applause to a performance by Boy George. The event was a fitting send-off for fashion’s ultimate showman—and the most impressive couture cast of the season.