Since tying the knot with Prince Harry on May 19, Meghan Markle has fast become a royal style icon. The former actress has already impacted on global fashion trends, with "the Meghan effect" growing in force each time she steps out. Since arriving down under for her first royal tour, Markle has chosen to embrace Australian brands such as Karen Gee, Martin Grant and Outland Denim for her maternity wardrobe. Here’s a look at what the Duchess of Sussex has chosen to wear so far.

Stepping out at Admiralty House in Sydney for the first time since announcing her pregnancy, Markle opted for a cream form-fitting knee-length sheath dress from Australian designer Karen Gee, which she teamed with beige Stuart Weitzman heels. With barely a baby bump in sight, the Duchess of Sussex also chose to wear two pieces of jewellery from the late Princess Diana’s jewellery collection: a set of gold and diamond butterfly-shaped earrings and a gold bracelet with blue stones. 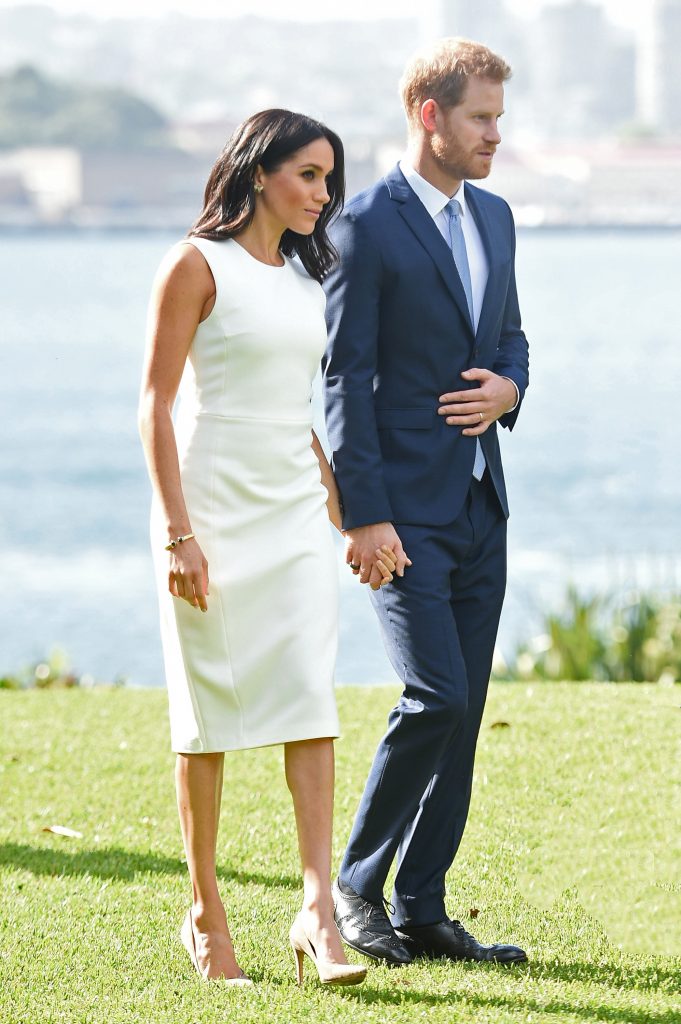 As the weather cooled down, Markle added a beige trench coat from Australian designer Martin Grant and changed into sensible black ballet flats for her trip across Sydney Harbour to the Opera House and Man O’War Steps. 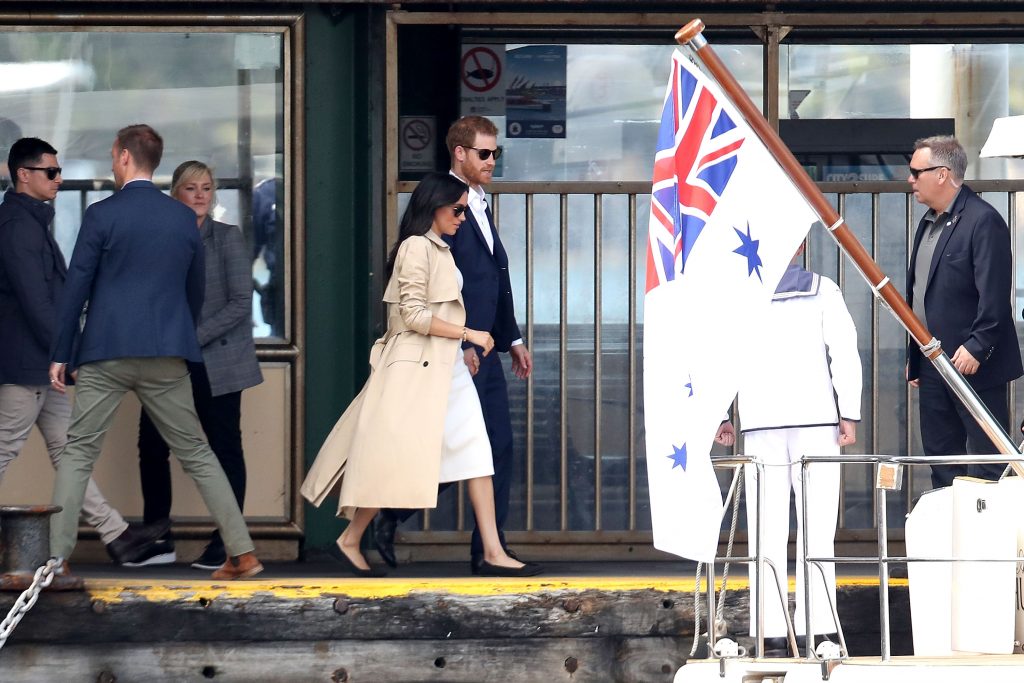 Prince Harry, Duke of Sussex and Meghan, Duchess of Sussex board a boat from Taronga Zoo and head to the Man O’War Steps on October 16, 2018 in Sydney, Australia (Photo by Chris Jackson/Getty Images)

For her final look of day one, Markle wore an olive green button-up pleated dress from US designer Brandon Maxwell as she attended an afternoon reception hosted by the Governor-General back at Admiralty House. This is the second time in only a few short months that the Duchess has worn a dress by Maxwell. Back in July she opted for a bright yellow shift dress from the designer for an engagement in London. 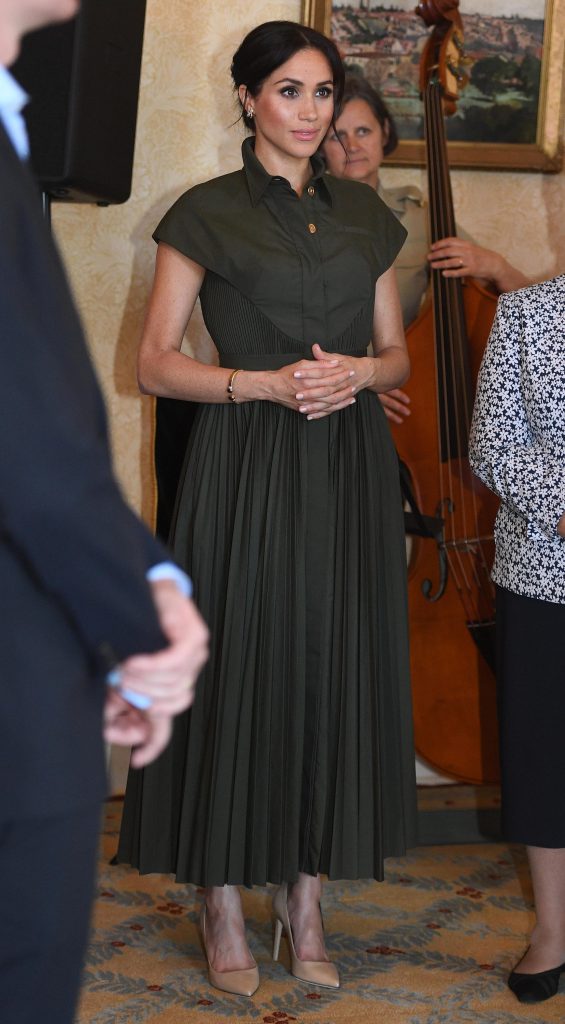 Meghan, Duchess of Sussex attends a reception hosted by the Governor-General at Admiralty House on October 16, 2018 in Sydney, Australia (Photo by Pool/Samir Hussein/WireImage)

For day two, the mum-to-be oozed country classic as she arrived in Dubbo wearing black skinny jeans from the ethical and environmentally-conscious Australian label, Outland Denim, a white shirt from Maison Kitsuné, J.Crew boots and an oversized blazer from the Serena Williams Collection. 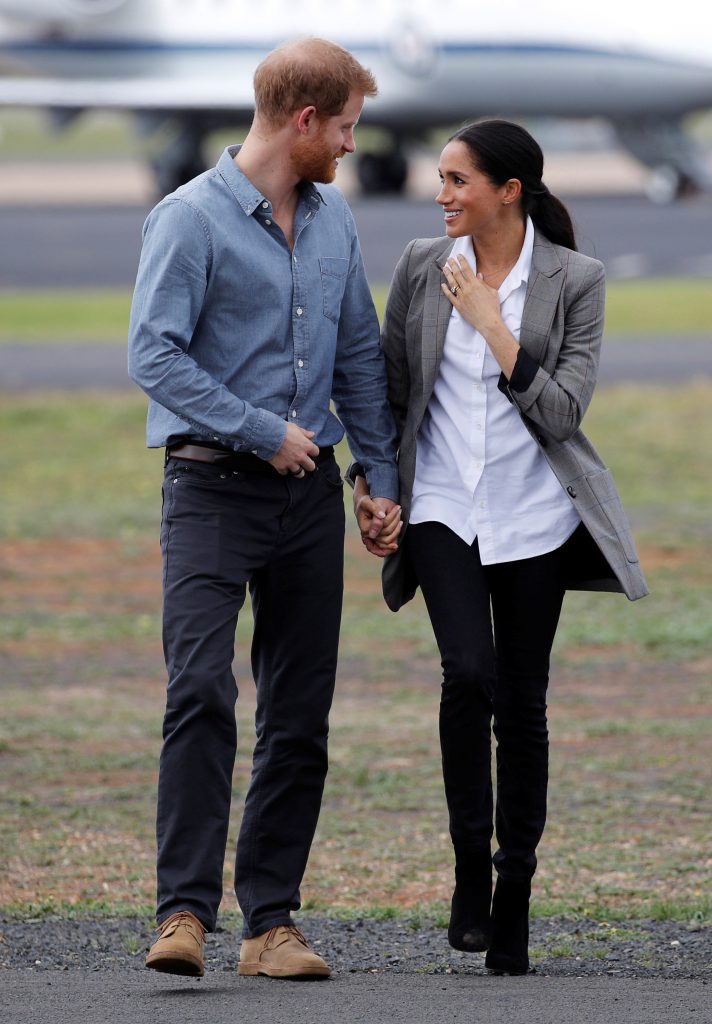 On day three of their royal tour, the Duke and Duchess of Sussex touched down in Melbourne, where a glowing Markle stepped out wearing a custom-made sleeveless navy dress from local designer Dion Lee. 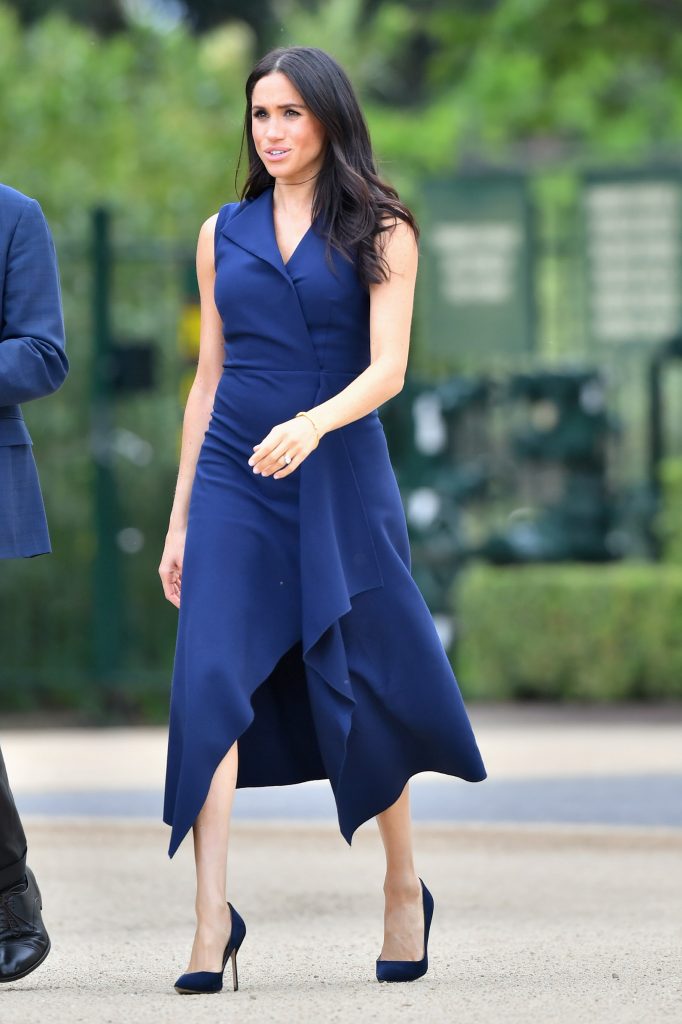 Later that afternoon, when the duo went to visit lifeguards at a South Melbourne Beach, the Duchess changed into a dress from Club Moncao, which featured button detailing down the side. Markle teamed the black dress with a versatile camel trench coat and sand appropriate ballet flats. 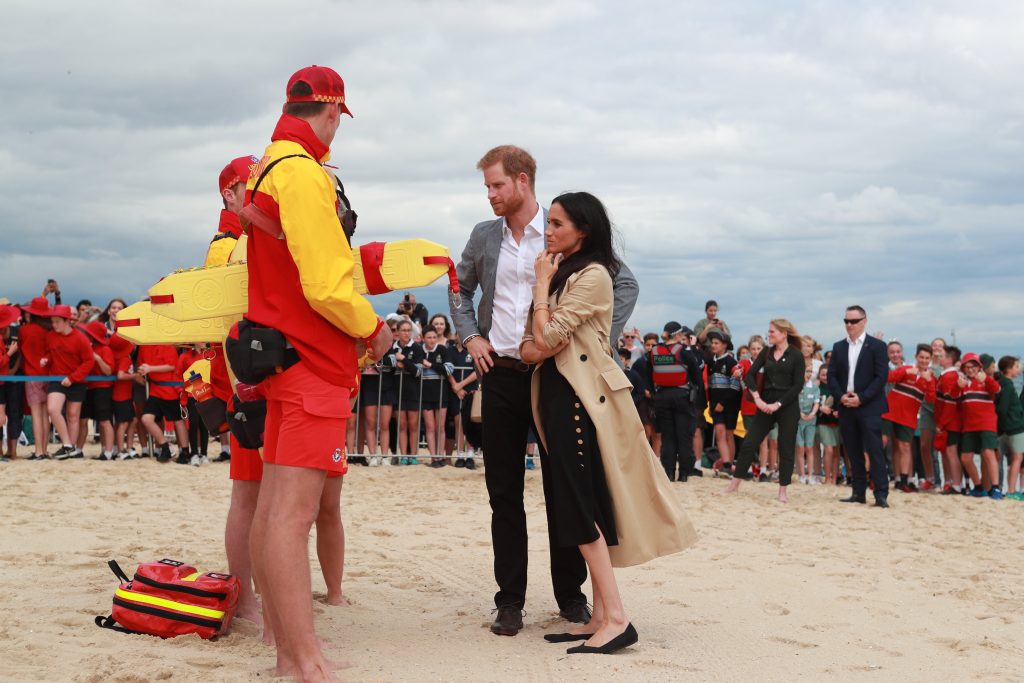 Prince Harry, Duke of Sussex and Meghan, Duchess of Sussex speak to lifeguards during a visit to South Melbourne Beach on October 18, 2018 in Melbourne, Australia (Photo by Ian Vogler – Pool/Getty Images)

On day four of the royal tour, Meghan Markle arrived at Bondi Beach in a striped maxi sundress from Australian label Martin Grant. This is the second piece Markle has worn from the Australian designer on the tour. The Duchess paired the dress with Castañer espadrille wedges. 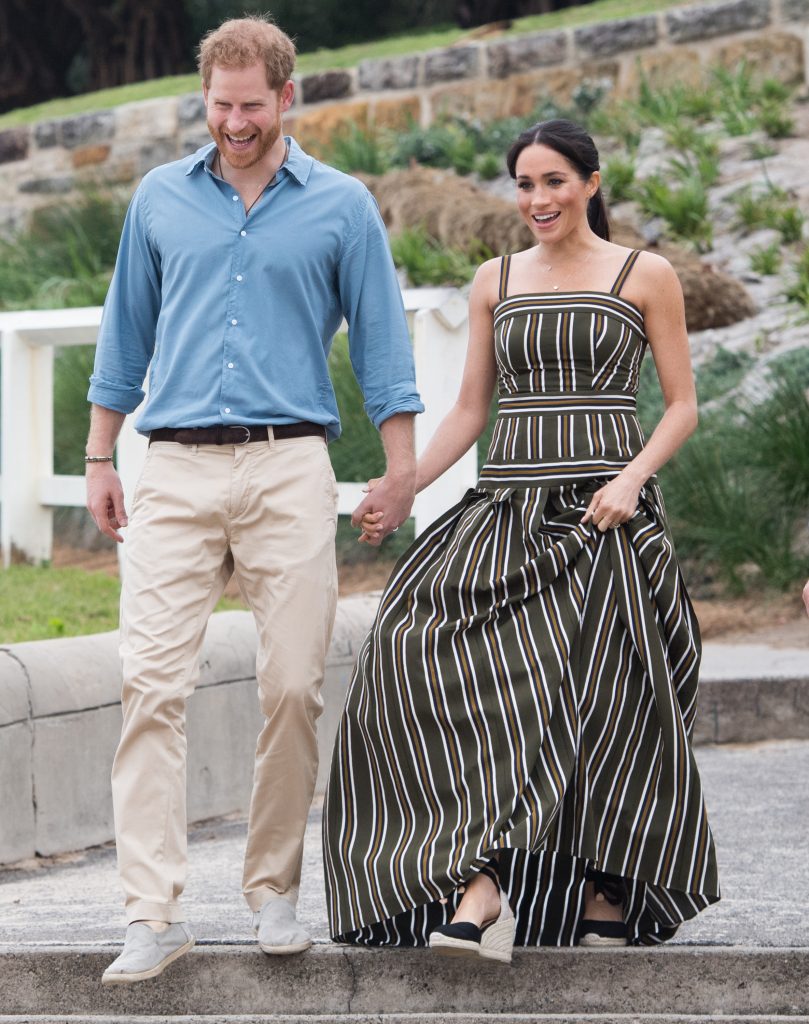 For her second look of the day, Markle changed into a two-toned blue Roksanda Athena midi dress, which she teamed with a pair beige heels. 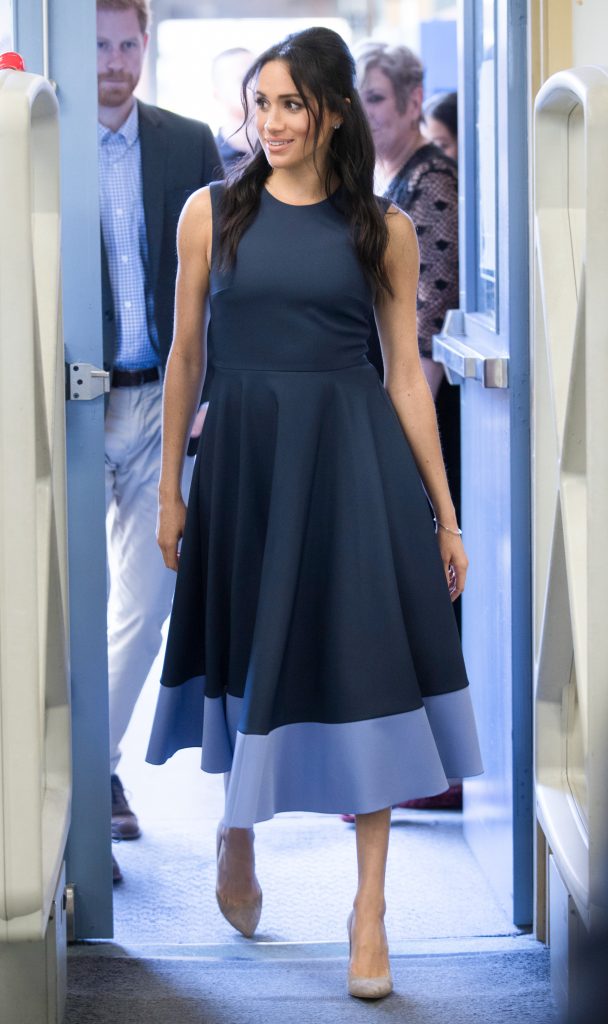 Feeling Inspired By The Royal Tour? Here’s Our Guide To The Best Shopping Spots In Sydney