Escape to the Mediterranean with Chanel’s Cruise 2021 collection

Revisiting the same Mediterranean routes that inspired its first cruise collections created by its founder Gabrielle Chanel, this year Chanel takes us on an imaginary trip to the crystal-clear waters of Capri.

If you’re feeling blue that most trips to the Mediterranean are on hold right now, simply take a glance at Chanel’s latest cruise campaign. Channelling the crystal-clear waters, purple bougainvillea and the light-heartedness that only the French Riviera can offer, the 2021 collection ‘Balade en Méditerranée’ (translation: A Mediterranean Stroll) immediately evokes the same lightness, simplicity and relaxation the house has been famous for since its first cruise show back in 1919.

Chanel ambassador Lily-Rose Depp is the star of this season’s show, beautifully portrayed through the lens of world-renowned photographer Karim Sadli. “Virginie Viard was looking for someone who could embody a freshness, a sort of candour, a liberated and confident femininity, and who has a playful spirit,” she says of the protégé. “I’ve known Lily-Rose since she was young in Los Angeles, through her mother, before she started her career as an actress. I have a great deal of affection for her, and we shot this campaign in an atmosphere of familiarity and trust.” For 2021, Sadli shot Lily in Paris, where she can be seen lounging around the swimming pool of a grand stone house, and it is immediately clear that this time around, Chanel has once again revisited the same Mediterranean routes that inspired its very first collections created by Gabrielle Chanel, popular with women who would often frequent the French Riviera and Lido beaches. 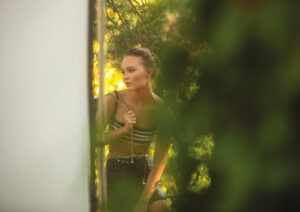 Chanel’s deep history is strongly rooted in its cruise collections. In fact, Gabrielle Chanel invented the very concept of cruise in 1919 when she presented a Paris collection outside of the seasonal fashion schedule, exclusively for women like herself who would holiday on the beautiful beachfronts of her much-loved Biarritz come February, but didn’t want to recycle their spring/summer wardrobes. Rich in supple jerseys, comfortable sweaters, light knits, suits and evening gowns, her mid-season collections – shown twice a year in March and October – provided the perfect wardrobes for the vacationer who enjoyed lazy afternoons on a boat to tête-à-têtes over dinner by the sea.

While Chanel’s cruise collections remained popular for a while, by the time Karl Lagerfeld joined the house in 1983, they were on the brink of extinction. Determined to breathe new life into Gabrielle’s much-loved concept, he developed cruise into clothing made for women looking to escape bleak European winters in favour of warmer climes, pushing the shows to May with the collections arriving in boutiques in November. Today, cruise collections – or at least the idea of an in-between collection – are the norm. 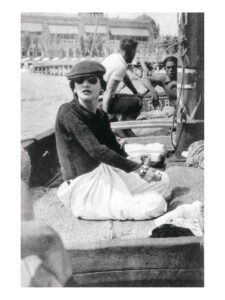 Gabrielle Chanel during a summer in Paris

It’s not just the idea of travel that has inspired Chanel’s cruise collections, but the destination as well, and since the 2000s, the house has taken us to the Café Marly in Paris, Grand Central Station in New York, LA’s Santa Monica airport, the gardens of the Château de Versailles, The Island in Dubai and a whole host of other fabulous locations too long to list. This year’s show was originally meant to be shown on the island of Capri, but sadly those plans were dashed by the pandemic and Viard was forced opt for Chanel’s first-ever virtual collection.

The clothes, of course, were no less than spectacular. Today, Chanel’s cruise is no longer pigeon-holed to holiday wear and instead curates a complete travel-inspired wardrobe, which has never been more evident than in Lily-Rose Depp’s imaginary 2021 trip to Southern France. According to the creative director, this collection was conceived for a “wardrobe that can be carried in a little suitcase on wheels, a shopper and an embroidered handbag,” with Depp seen modelling a jacket and wraparound skirt suit in pink tweed styled over a triangle bikini top in organza, which comes highlighted with multicolour sequins, as well as a bandeau top and trouser combination in pale pink tweed. Elsewhere, a cape and skirt in black chiffon exudes contemporary elegance, while jewelled belts highlight the waist. 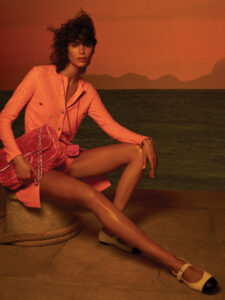 “Initially I had Capri in mind [for the shoot], where the show was supposed to take place, but it didn’t happen in the end because of lockdown,” says Virginie Viard of the collection. “So we had to adapt. Not only did we decide to use fabrics that we already had, but the collection, more generally, evolved towards a trip around the Mediterranean… the islands, the scent of the eucalyptus, the pink shades of the bougainvillea.” We have high hopes that for 2022, Chanel will once more take us to a far-flung location beyond our wildest dreams. For now, at least, we can still daydream.