Exclusive: Wes Gordon on the Joy of Carolina Herrera Clothes

In a world weary with upset and unrest, Wes Gordon’s mission to make ours a life less miserable starts with a wearable wardrobe packed with happy, Carolina Herrera clothes. For autumn/winter 2020, the creative director showcased a punchy palette of bold colour and buoyant ruffles, with oversized silhouettes and floral prints inspired by a maximalist approach Gordon entitled, ‘the grand gesture.’

The New York show marked Wes Gordon’s second anniversary at the house Mrs. Herrera built —  but, while others have turned house codes on their head to make a statement of their arrival, 32-year-old designer Wes Gordon, has taken a different direction. While treading the path so carefully created by Carolina herself, Wes Gordon has subtly embedded his fresh attitude into the label — with new ideas that can only be compared to spot of redecorating, not a renovation. 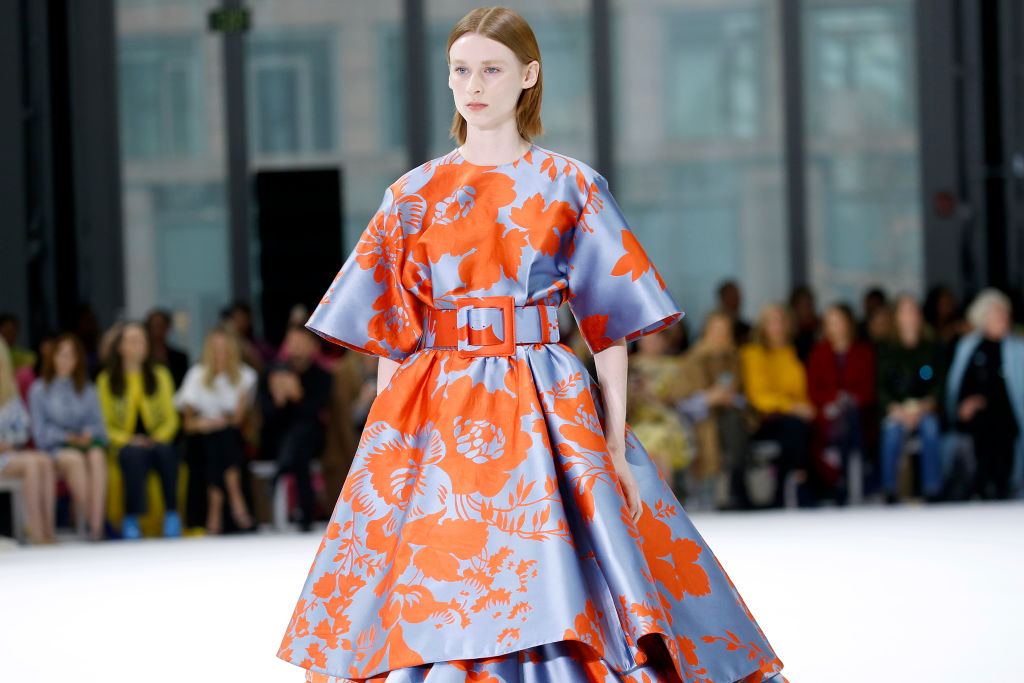 “I walked into something very special,” smiles Wes, as we chat over afternoon tea at the Four Seasons, Jumeirah on his first trip to Dubai.

“I like to compare it to how in New York, the ultimate real estate prize that people are looking for is that perfect, pre-war apartment. It’s older; it has beautiful woodwork, gorgeous, marble fireplaces and original parquet floors – nothing has been ruined. No-one went in there in the ’90s and tried to make it a big, open space and put in an ugly kitchen – it’s original features are all still there,” he says, sipping an iced coffee. 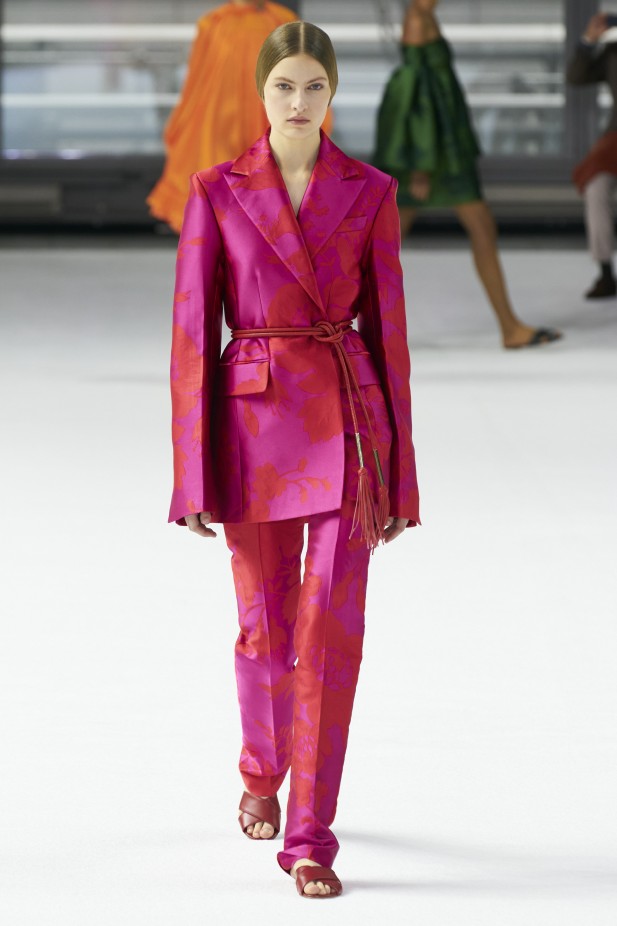 “And Mrs.Herrera kept it all there. She protected it. I mean, this is the woman with the best taste on earth, who was there picking out that beautiful woodwork and those marble fireplaces. And so when I arrived, using the metaphor of finding this magnificent, pre-war apartment on 5th Avenue, all it needed was redecorating – the bones were perfect. Maybe just a little paint here and there, some wallpaper to really emphasise how spectacular this place is. But there was certainly no need for a gut-ripping renovation and jackhammers.”

Graduating from London’s Central St.Martins in 2009, having interned at Oscar de la Renta and Tom Ford, Atlanta- born Wes moved to New York and set up his namesake label that same year. “I ran my label for eight years. And running your own small fashion business in New York is like dog years, you know, in terms of the toll and the stress it takes on you – so, it was like 56 years in total,” he laughs. 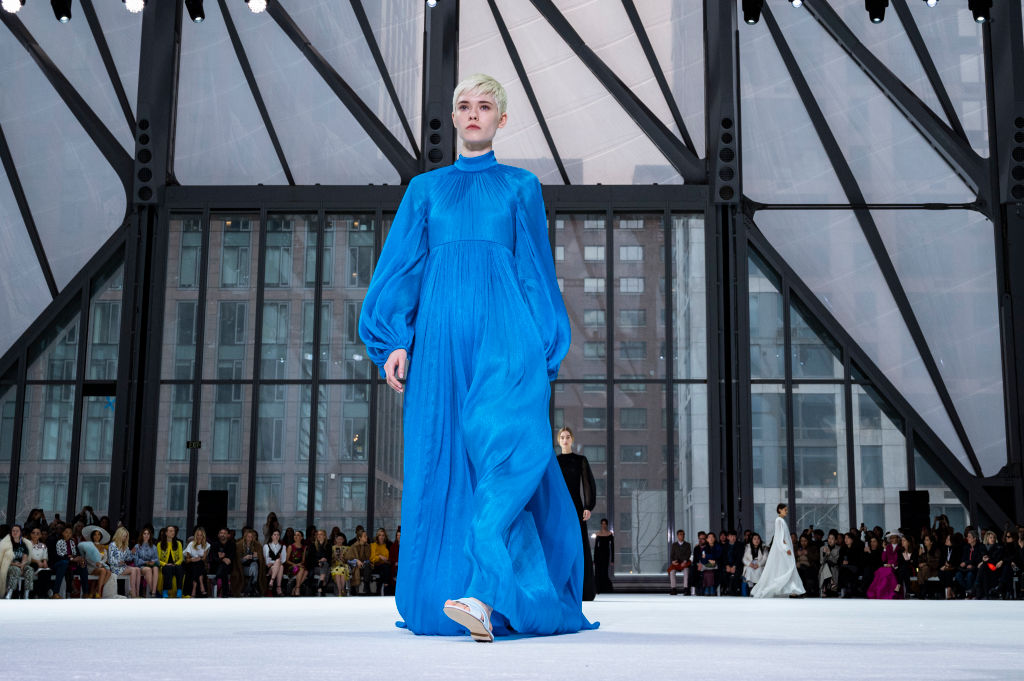 “I think I really paid my dues in that way. It was like a trial by fire PHD in fashion, understanding all aspects of it, from the sales side, the production side, the materials side, the marketing side – in a way that I wouldn’t have been able to learn otherwise. But I believe that everything happens for a reason.”

“That concentrated baptism of fire helped, because it led me to what I’m doing now. So I don’t think this appointment came from nowhere. I think everything that I’d been doing led me to that meeting with Mrs. Herrera. And now, well, here we are.” 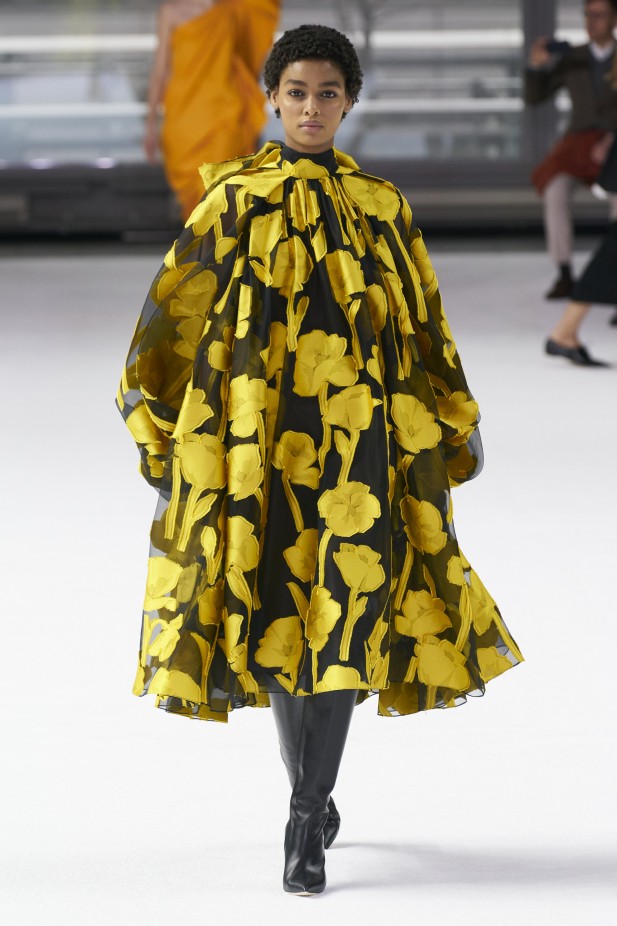 First employed by the house as a consultant in 2017, after a year of working closely with Carolina, Wes was appointed her successor the following February. “When I first interviewed for the role with her, of that hour-and-a-half we were together, only five minutes were spent actually talking about the job.”

“We spoke about books, about TV shows, our pets, our favourite restaurants – everything really. I think we immediately forged a bond over our shared beliefs that design and fashion is about so much more than just drawing a dress. That it’s about how you live, the world around you, where you find your inspiration, the things that make you smile – all of those things that make the world a little more beautiful.” 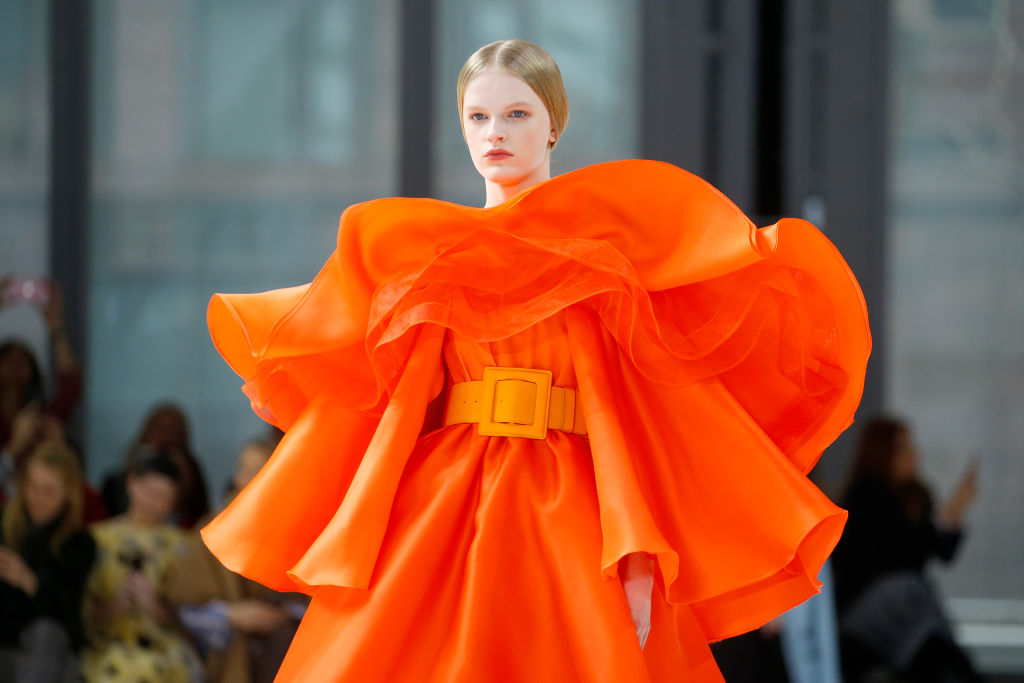 Carolina Herrera retired from her role as creative director to become the house’s global brand ambassador at New York Fashion Week in February, and Wes showed his first collection for the house in September 2018.

“Mrs. Herrera was the sole figurehead of the company until she stepped down. It took a lot of trust for her to walk away,” muses Wes. “She literally handed me her baby. She built this from scratch. It’s her name above the door – this was her identity. So it’s an enormous honour and responsibility to be the protector of that legacy.” 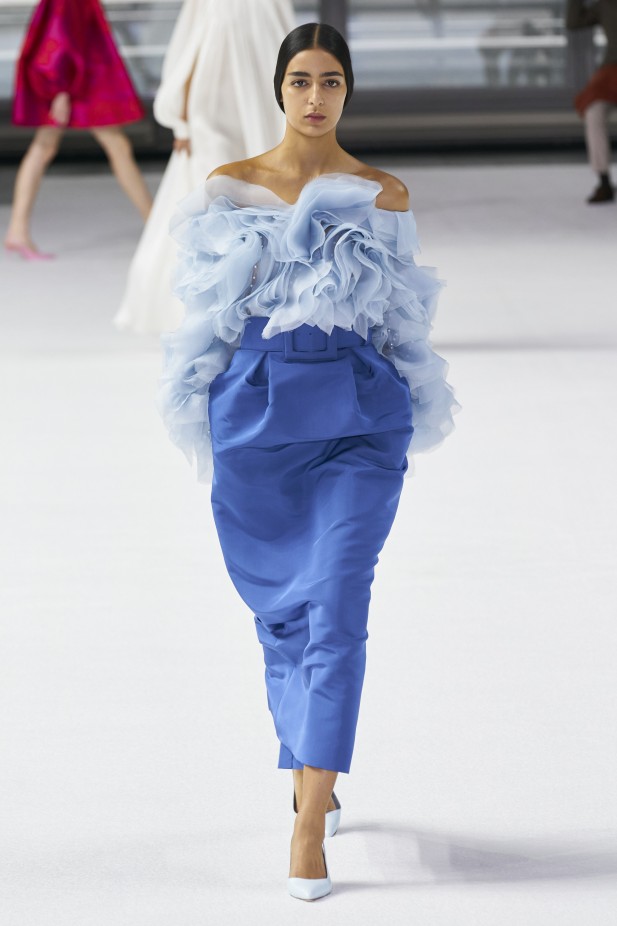 “But at the same time, there’s no-one more modern and cool and forward-thinking than Mrs.Herrera. So if she thought I was just going to keep things exactly as they were, and make it into a museum, she wouldn’t have chosen me in a million years. There’s no-one who believes in fashion evolving and changing and going forward more than she does.”

So how exactly do you take up the mantle of a heritage house and drive it forwards without losing it’s codes? “You don’t want to mess with the codes of a house,” says Wes. “But when I started, in this environment of so many brands, and fashion clutter and clothes everywhere, I just thought, ‘What should Carolina Herrera be for tomorrow? What is this house, what makes it special and what things about it resonate with women today?’ And the answer came to me – it was literally staring at me in the face.” 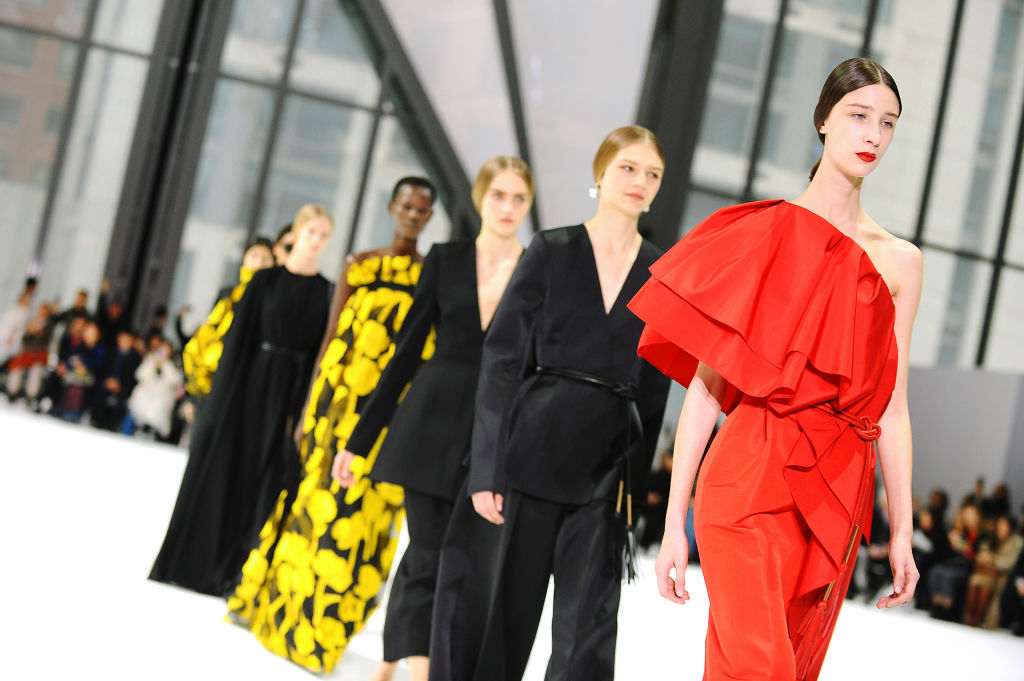 “In the office, there’s an Andy Warhol of Mrs.Herrera that she had done at the very start of it all, in the early ’80s. Her hair is up, she’s wearing bold eyeshadow with big, red lips, a fabulous dress and these huge earrings, all done in Warhol’s signature bold, punchy colours.”

“And in that painting, by looking backwards to the past, I kind of found the new DNA of Herrera – the colour and energy and vivaciousness and vitality of really bold femininity. Something that’s true to our history and our founder, but also so needed today in a world that can be so uncertain and scary and grey.” 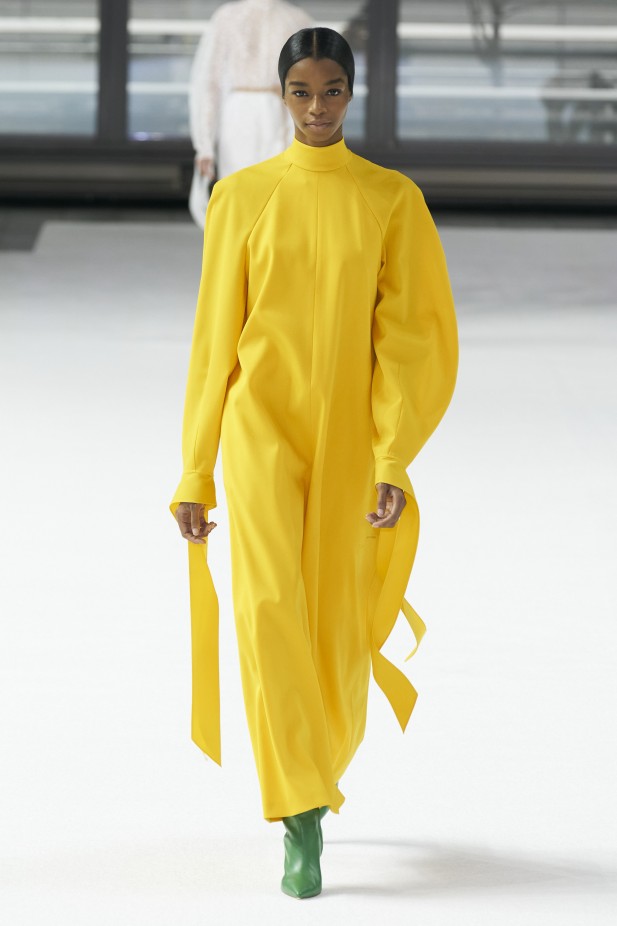 “I don’t think any one of us can say with confidence right now what tomorrow is going to be like. But I want Herrera to be the brand that’s the rainbow in all the grey, a brand that just stands for beautiful clothes that make you smile.” 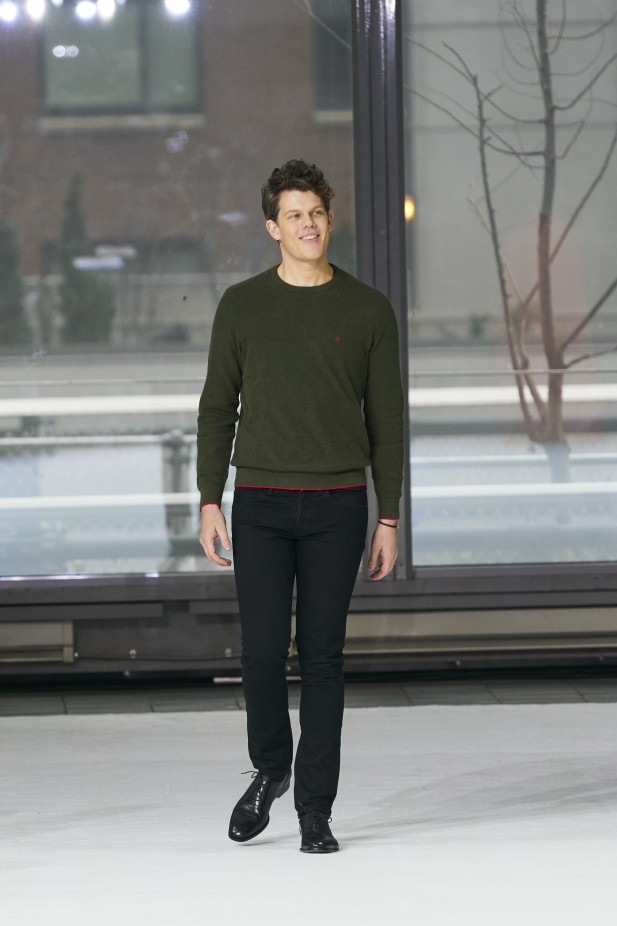 Wes Gordon during the finale of Carolina Herrera’s AW20 show

“When you zip yourself up into a Herrera dress, you’re going to be in such a good mood, even with all the bad things happening in the world, because it’s OK to smile. Even though a dress isn’t going to save the world, you can’t surrender to the darkness. You need beauty and light and positivity, and that’s everything this house stand for.”

Cheat Sheet: Here’s What You’ll Be Wearing For The S/S19 Season