Why The French Riviera Should Top Your Cultural Bucket List

MOJEH states a case for a cultural pilgrimage to the French Riviera come spring, summer or autumn. Time to explore the art of the azure

Lovers of culture are aware that sometimes compromise is required in order to pursue their passion. The perception is that Europe’s greatest cultural assets are hidden within landlocked cities and in order to experience them you must tread uncomfortably through the sweltering streets of Rome, London or Paris. The French Riviera is, in fact, home to a trove of creative treasures from art’s modern masters, iconic architecture immortalised in film and a fresh wave of edgy emerging artists ensuring that there’s something to appeal to every cultural palette.

When considering your base from which to absorb this rich artistic tapestry, there’s an obvious choice. Captured on screen and documented through the lens of Slim Aarons, the InterContinental Carlton Cannes is synonymous with cinema and harbours its own plot-worthy history. The hotel came from a Russian love story. In 1872, the Grand Duke Michael fell in love with Sophie of Merenberg, the granddaughter of the poet Pushkin, who reportedly fell beneath his social ranking. A taboo at the time, the Duke was subsequently banished from Russia by the Tsar Alexander III, so the couple chose Cannes as their new base and turned their attentions towards entertaining their elite social circle. Such prominent friends needed an equally prominent address to frequent so famed architect, Charles Dalmas, was employed to craft The Carlton. Charles adorned his magnificent white structure with a turret on each corner, surmounted by a cupola which, according to legend, is supposed to reflect the curves of the illustrious courtesan, La Belle Otéro. 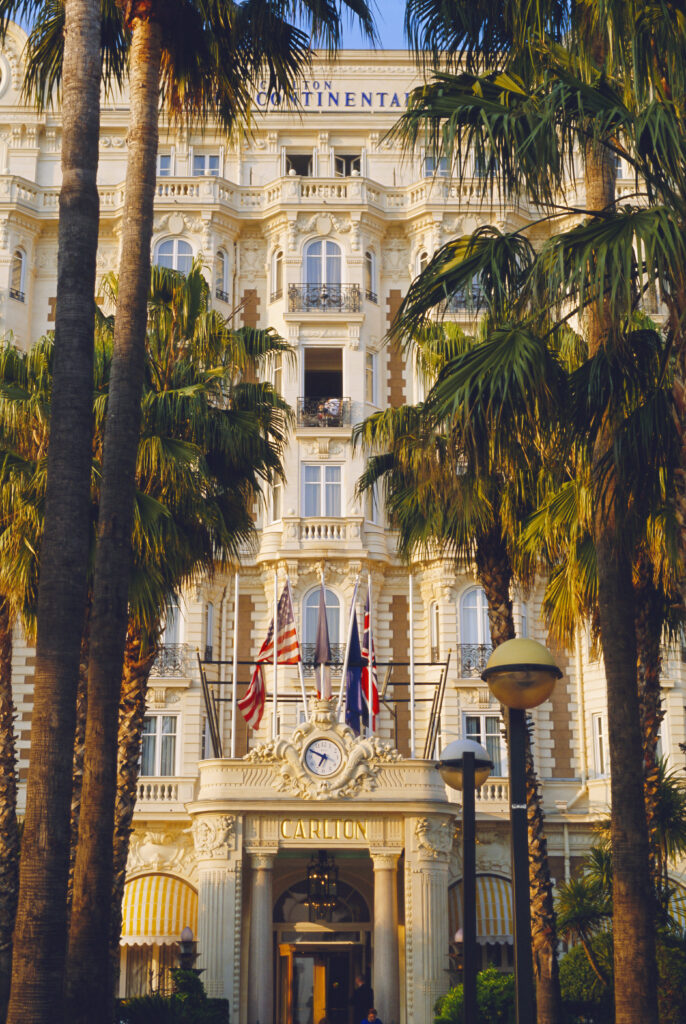 The Carlton, designed by architect Charles Dalmas in the 1800s

The following century saw the hotel play a pivotal role in the evolution of Hollywood, securing its place as the suite escape, on-screen backdrop and social meeting point for the stars. Proudly poised at the heart of La Croisette, The Carlton’s famed silhouette needs no introduction to lm fanatics. It was a natural choice for the jury and journalists of the Cannes Film Festival during its inauguration in 1946 and the rest, as they say, was history. Its exceptional blend of the Neo-Classical and Belle Epoque finishings inspired the greatest filmmakers of our time. “Alfred Hitchcock took part in building the Carlton legend in 1954 when he chose the hotel as the setting for his feature lm ‘To Catch A Thief ’,” explains executive concierge, Maxime Nerkowski. “The hotel exudes old-school Hollywood glamour and our most prestigious suite bears the name of Grace Kelly, who was a regular guest. It was during the festival in 1955 that Prince Rainier of Monaco and Grace Kelly first set eyes upon one another in the Grand Salon,” he continues.

Gliding through the imposing white pillars of the entrance, past polished marble and twinkling chandeliers, guests today continue to absorb the unwavering sense of cinematic romance and mystic that The Carlton emanates. It continues to honour the stars that drew fame to its vast hallways, naming grand suites in their honour. One can book a room in “Grace Kelly”, “So a Loren”, “Alain Delon”, “Sharon Stone” or “Sophie Marceau”, and take to a sun lounger on the sweeping balcony for Cannes’ most privileged sunset vantage point. From there you can look to your map and plot your cultural journey – after all, there’s a wealth of galleries and museums just a short train ride or car journey up the coast. 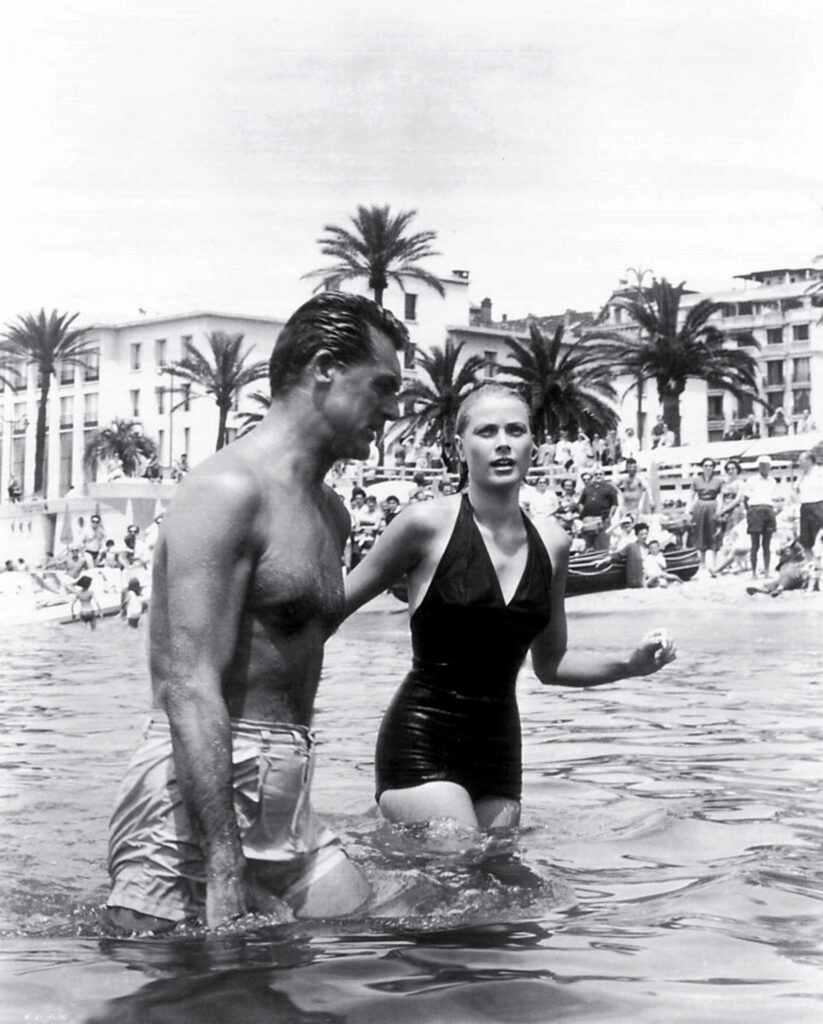 Actors Cary Grant and Grace Kelly on the set of To Catch A Thief, 1954

In 1917 Matisse journeyed south to Nice and famously expressed: “When I realised that each morning I would see this light again, I could not believe my luck.” The artist and many of his contemporaries made their base in the region, enamoured by the favourable lighting and relaxed pace of life that sparked the creation of new works. Their legacy remains to be enjoyed today. The first stop along the coast is Antibes’ Musee Picasso located in the striking Chateau Grimaldi that was once the artist’s studio. It has an idyllic atmosphere with the Chateau caressing the shoreline and the calming chords of the organ from the nearby Cathedrale Notre Dame de I’lmmaculée floating up. The location’s impact on the old master is obvious. “In just two months, Picasso created 23 paintings and 44 drawings. Among these are well-known works including Les Clés d`Antibes, Joie de Vivre and La Femme aux oursins,” says Heinz Playner, curator, art critic and director of PAKS Gallery. Accompanying the collection of over 300 works by Picasso are contributions from Nicolas de Staël and Anna-Eva Bergman. The sculpture terrace sees Picasso’s metalwork set against a jaw dropping blue backdrop of sky and sea, and is an apt spot to snatch a moment of quiet contemplation above the turquoise waves.

Another destination for another day, if you take the train a little further north you’ll arrive in Nice where the National Marc Chagall Museum lies in wait. It’s a magnificent building that houses the largest public collection of the artist’s work, with a spectacular concert hall bathed in blue light from Chagall’s stained-glass visions. “Chagall discovered the Riviera in 1926 and he was struck by the beauty of the flowers on the markets,” says Anne Dopffer, director of the Musées Nationaux du XXe Siècle des Alpes- Maritimes. “The bouquet, a recurrent colourful representation in his art, became a symbol of life and beauty. Another good example of the influence of the Mediterranean on his art is the mosaic Chagall created for his museum: the Zodiac signs are arranged in a twirling Mediterranean landscape. Reserve at least a day to take in what Nice has to offer. There’s also Musée Matisse and the Musée d’Art Moderne et d’Art Contemporain which holds an impressive collection of contemporary works by the likes of César, Warhol, Wesselman, and Yves Klein.

Head back towards Cannes and you’ll encounter the Fernand Leger National Museum in Biot and Pablo Picasso’s War and Peace Museum in Vallauris. There’s much more in the area and you could spend all evening formulating plans, made all too comfortable by the subtle fifties’ charm of your suite, but it’s not advisable. In a city populated with Michelin-starred eateries, The Carlton Restaurant, under Head Chef Laurent Bunel, is known to surpass the desires of even the most demanding food critics with its seductive menu based around the best Provencal produce. Breakfast is also an exceptional a air; a journey back in time with the past illuminating the present. There’s an air of the colonial as fans softly waft a breeze through the patio and the service is as impeccable and joyful as the setting. Bubbles compliment an array that spans lightly smoked salmon, wonderful cheeses and delicate meats. It’s the perfect way to ease into the day, observing the spot where Slim Aarons captured “Carlton Hotel” in 1958, while sipping black coffee and awakening to the city’s Old World brilliance – it’s as though time stopped at precisely the right moment.

It’s advisable to be strategic with your visit as Cannes is blessed with a brimming cultural calendar. “The Film Festival is one of the most highly anticipated events in the lm industry’s calendar, promoting the city to a global audience, but there are so many other ways that film and cinema are threaded into the way of life here,” explains Maxime. “The Ephemeral Museum is the cultural event of the summer that returns to Cannes at the Palais des Festivals. The event is dedicated entirely to the world of ‘the seventh art’. The Cannes International Series Festival also happens each spring and highlights series from all over the world, affording crucial recognition to this new and growing form of art,” he continues. 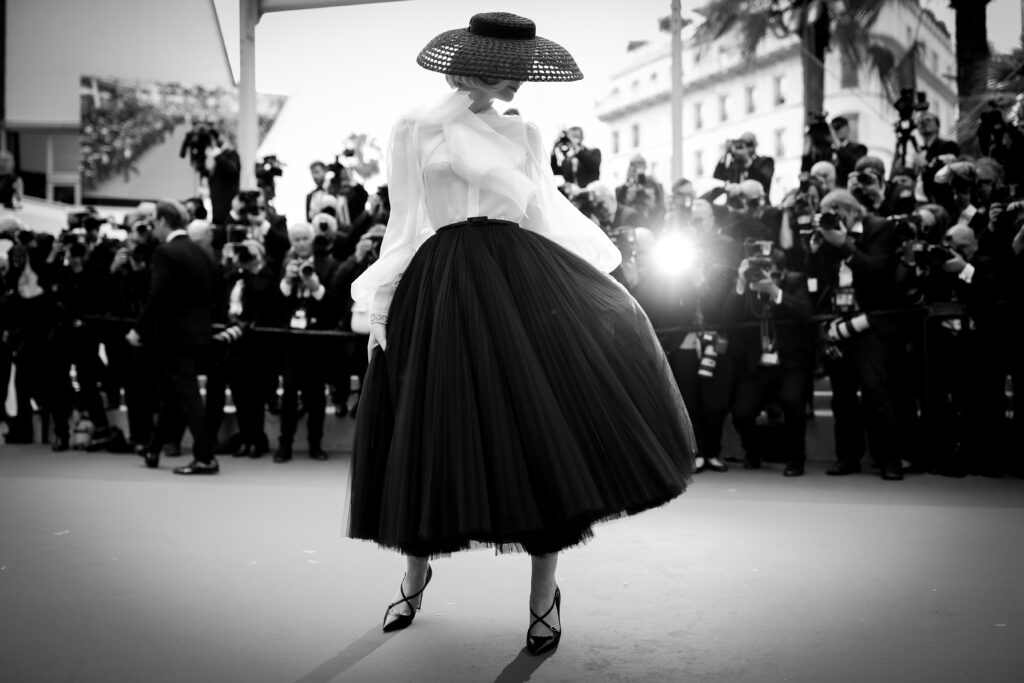 For those more inclined to travel later in the season, there’s plenty. “The weather is still very warm and you can go to the beach, swim, and enjoy the Monaco night life,” says Guy Antogelli, general manager of Monaco Government Tourist & Convention Authority. “There’s also a lot of cultural highlights during these months: the Monaco Yacht Show usually takes place in September, Ballet and Opera Seasons starts in October, and from mid-October you can even enjoy a Luna park fair on Monaco Hercules Harbour.”

For those with more than a passive interest in the arts, Heinz indicates that beyond the international names, there’s a thriving contemporary scene to be explored. “Naturally the unique charm of the towns and cities in the French Riviera continues to inspire the artists of today,” he says. “Take pop art artist Tanja Playner as an example – she has a way of expressing her lifestyle so clearly through her paintings. We also represent painter and sculptor Pari Ravan, who lives and operates near Nice. Her life took her from Persia via Germany to Nice, and her paintings have a very philosophical nature, while Stefan Szczesny lives and works in St. Tropez and already has a long successful career behind him.” 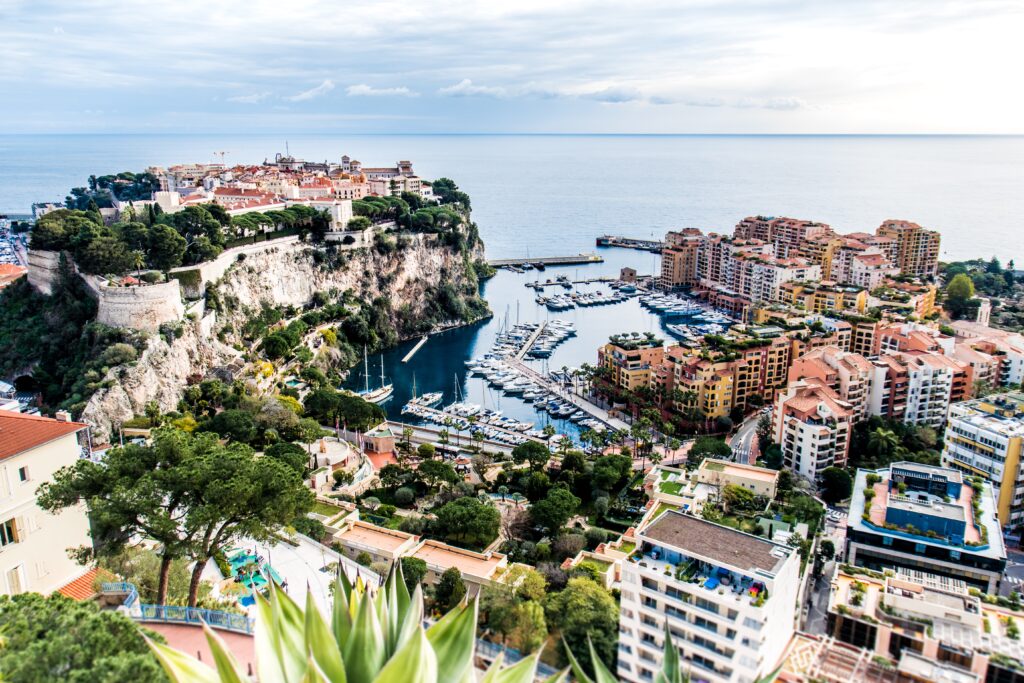 Views of the French Riviera

Autumn on the French Riviera is a delight, whether you happen to be exploring from a luxurious pied-a-terre on La Croisette or a superyacht moored in the marina. And whether you’re there navigating the greats of twentieth century art, absorbing the explosive allure of classic cinema or enjoying the work of future masters, falling in love with this part of France, silver screen starlet-style, is the ultimate predictable happy ending to every traveller’s tale.

Out Of This World Memoirs: One&Only Reethi Rah, The Maldives