A favoured haunt of silver-screen legends both past and present, Castello di Casole plays the leading role in this Italian holiday romance

Arriving at Castello di Casole in the midnight rain is a cinematic moment. After winding up and down black Tuscan roads, one will eventually find themselves afoot a handsome hill. Glittering lights pave a runway that leads to a glowing castle perched on a rather steep incline – the destination unmistakable, a beacon in the night.

We pull up outside the front steps and two bell boys run out eagerly with umbrellas, only to hover over me awkwardly as I empty the contents of the glove compartment, wind up various cables and reassemble the contents of bags that I’d scattered about the car since setting off from Florence’s airport 77 kilometres ago. The bell boys weave in and out, bob and bend, as they attempt and fail to keep me dry while I beaver around between front and back seats. It’s sweet, cartoonish and hapless, a scene from a Jacques Tati film. But there is nothing hapless about this formidable castle, just outside the picturesque city of Siena. 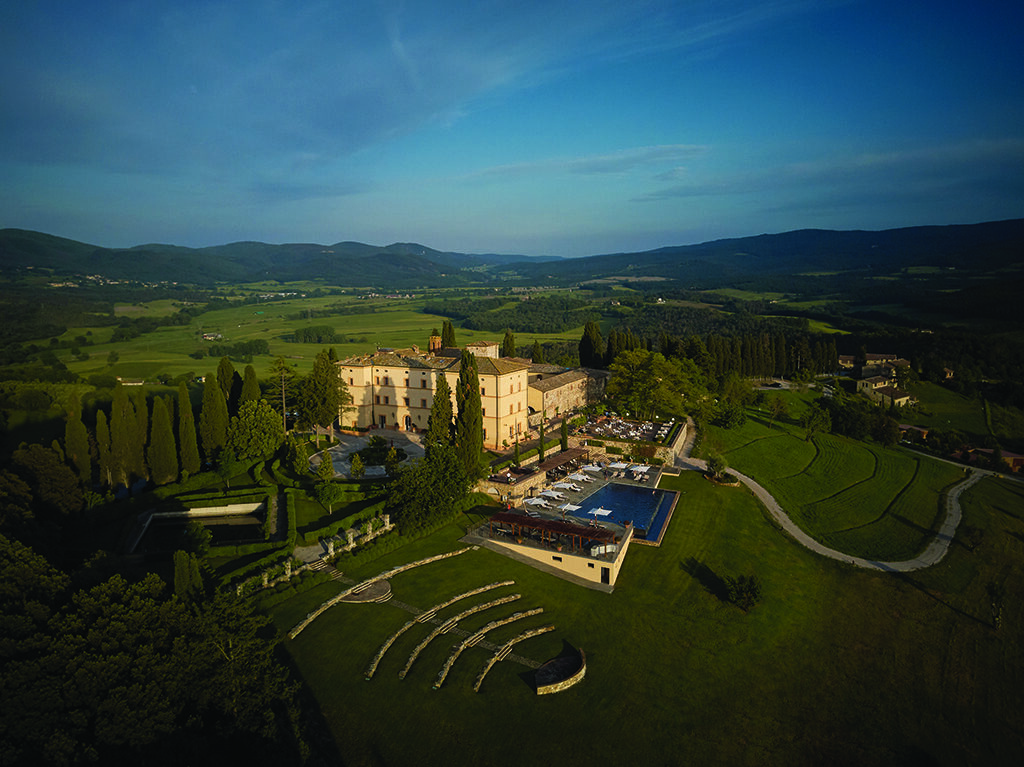 Upon climbing the front steps one is embraced by the warmth of engraved teak, imposing stone fireplaces, tawny terracotta coves and luminous Volterra marble light fittings and chalices, the latter filled with tiny coloured sweets. It is at once homely and grand – a mood befitting of its legacy.

Built in the 10th century, the estate stretches across 4,200 acres of olive groves, vineyards and an oak forest and, in its inception, was a village – named Querceto due to its quadrangular structure surrounding a central courtyard. Here was a cheesemaker, a winemaker, a grain store, a school, orchards, an olive press, a villa where textiles (wool, silk cocoons and mulberry leaves) were harvested and a limonaia – a large glass building in which the lemon trees were housed over the winter. 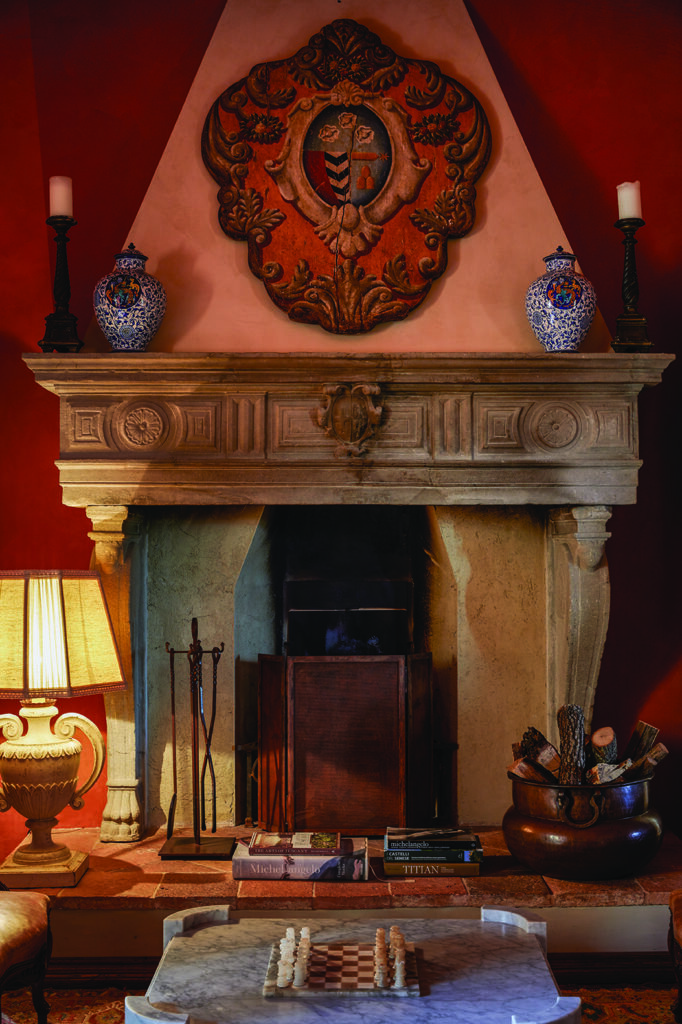 Today, this hive of buildings still stands – there’s even the original chapel, now used for weddings, while a delectable spa sprawls across the chambers of the village wine cellar a few doors down.

The estate has lived many lives. From the mid-17th century as a farm owned by the Bargagli family who excavated Etruscan treasures from its grounds – many of which can be found on display in that underground spa – and retained ownership for centuries. It was under the Bargagli’s reign that the farm saw a major renovation in the 18th century, resulting in the villa structure that is now Castello di Casole.

Said realm lasted up until the 1950s when it was purchased by Earl Edoardo Visconti, brother to film director Luchino (the remarkable Death in Venice, The Leopard, The Damned), who brought the likes of Sophia Loren and Claudia Cardinale here for movie premieres during the family’s heyday at the property.

In the 80s it began its life as a hotel, handed between various owners – chains and independent – until last year when Belmond, the luxury hotel group that owns Orient Express, took it over. Belmond has been sure to keep the castello’s charm intact. In fact, very little has changed on the site except a boost to the glamour via two fundamental shifts: flowers and bar food. The former comes by way of roses, a seemingly infinite amount. Rambling dog roses, pom pom peony roses and immaculate cup-and-saucer-sized tea roses tumble out from earthen window sills and enormous terracotta pots on the terrazzo. 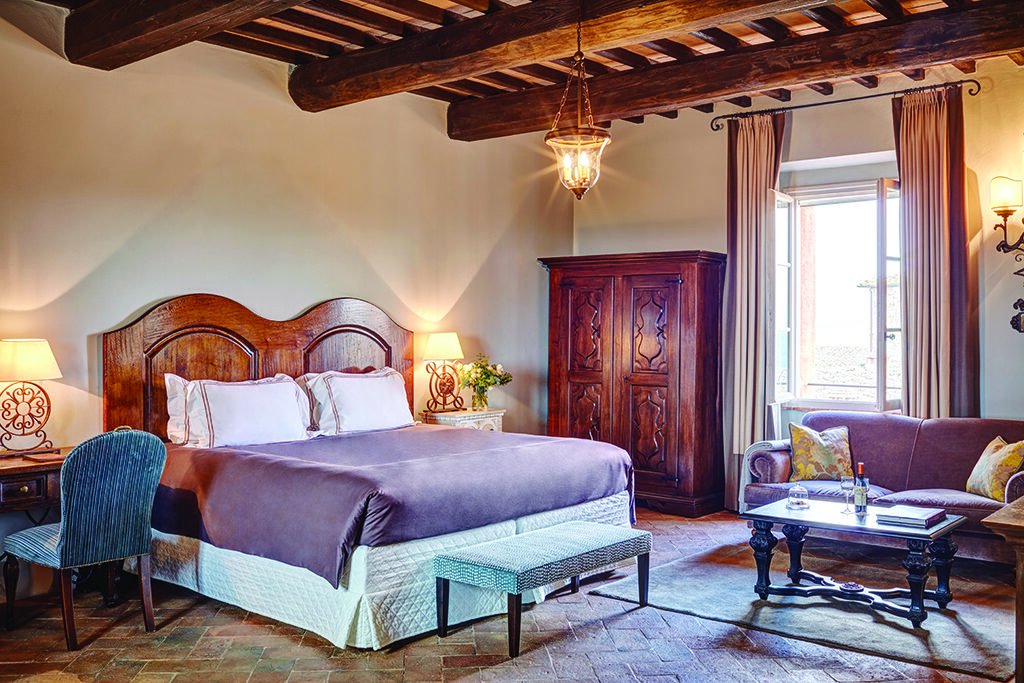 On the day we check out, more still are unpacked from a truck out front – as well as heaving bougainvilleas that are squirrelled away as if part of some clandestine operation to fill each and every crevice of the property with perfumed blooms. The latter comes courtesy of Cip’s – the bar serving lunch and an informal menu adapted from the iconic Venetian landmark hotel Cipriani, also a Belmond property, which is buzzing at night in a way that the reverential gourmet restaurant Tosca does not intend to (this is a far more serious affair, where wine is decanted with the utmost deference, into Venetian Murano aerators and gourmet Italian food is proffered).

Roving through the menus of either offers great delight. From Tosca’s spaghetti with sea urchin, smoked buffalo butter and nori seaweed, or the home-made Tortello stuffed with duck ragù, seasoned Stracchino cream and paprika, to Cip’s filet of beef carpaccio with Cipriani sauce or the steamed shrimp salad and hand-rolled pastas, one can run the gamut from local, uniquely devised dishes to cosmopolitan classics. The estate’s earthy olive oil and wines, both of which are served only on site, proliferate the menus too – like the Castello’s C and XII wines, spanning varietals of Petit Verdo, Sangiovese and Cabernet grapes. Every morsel steeps you further still into the surrounding countryside. 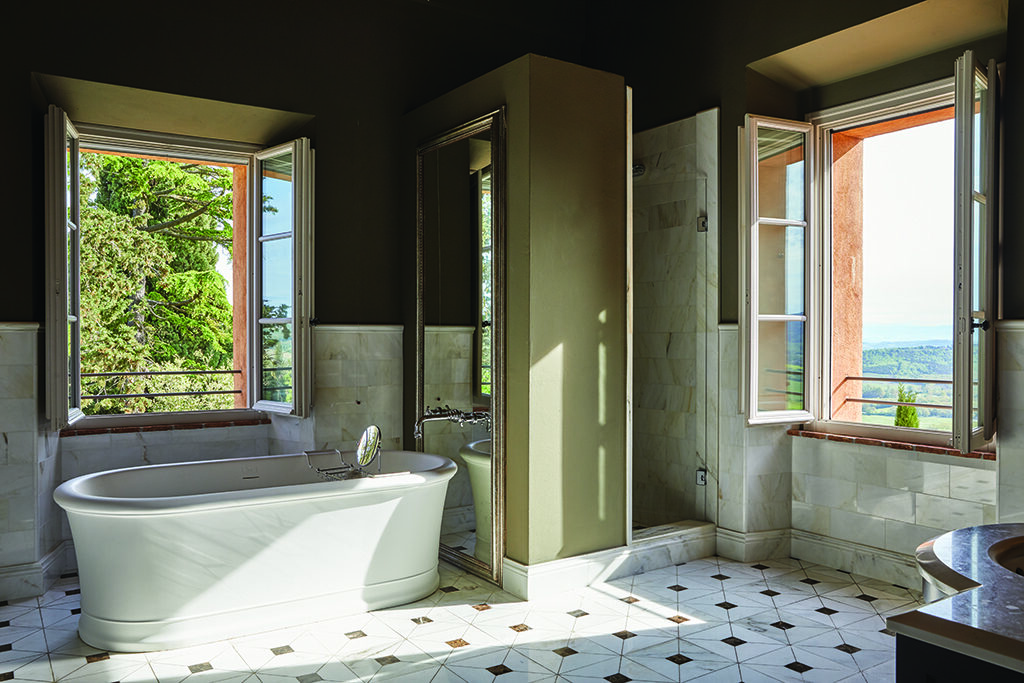 A day spent at Casole is also something ripe from a movie – though the dolce vita of a Fellini film, rather than the slapstick Parisian animation of our entrance, or the darkened drama of an Italian New Wave Visconti epic. It’s picture postcard perfect: the warm infinity pool is perched overlooking the Tuscan countryside, the same rolling greenery that can be seen from practically any window from this hilltop hotel, with every view framed by roses. Towels are immaculately rolled and pool boys in white shorts man the decks, Evian spray in hand.

The suites are classically dramatic too: with grand marble fireplaces, the estate had two furnaces that produced the tiles that clad the rooms. And the vast white bathrooms, where an entire afternoon can be spent in the roll-top bath with horizon views. Or on the massage bed at Essere spa – the Etruscan Signature treatment is a very thoughtful body massage where acute attention is paid to every wonky nook and cranny. Yoga classes take place on the lawn, or in the chapel on a rainy day. With meditation, cooking and pizza classes, and watercolour painting and Italian lessons on site it can be easy to meander about the property, or through its many acres, and never leave.

But there’s multitudes for the more adventurous too: truffle hunting in the woods; regional wildlife safaris; brunch with the local winemaker Varno Spinelli at his nearby farm in Casole d’Elsa; hiking; horse-back riding; bike tours. With every yogic breath, every activity, every mouthful, you immerse yourself in the landscape. And while you can certainly lose yourself at Casole, you’re sure never to forget where you are.

How to get there: Castello Castle is a 45-minute drive from Florence. Fly from Dubai to Florence via Paris on Air France; Belmond.com