When searching for a hotel in London the checklist goes something like this: location, location, location – because if you really want to experience the life and soul of this multifaceted, culturally-rich destination you need to put yourself right in the midst of it all. 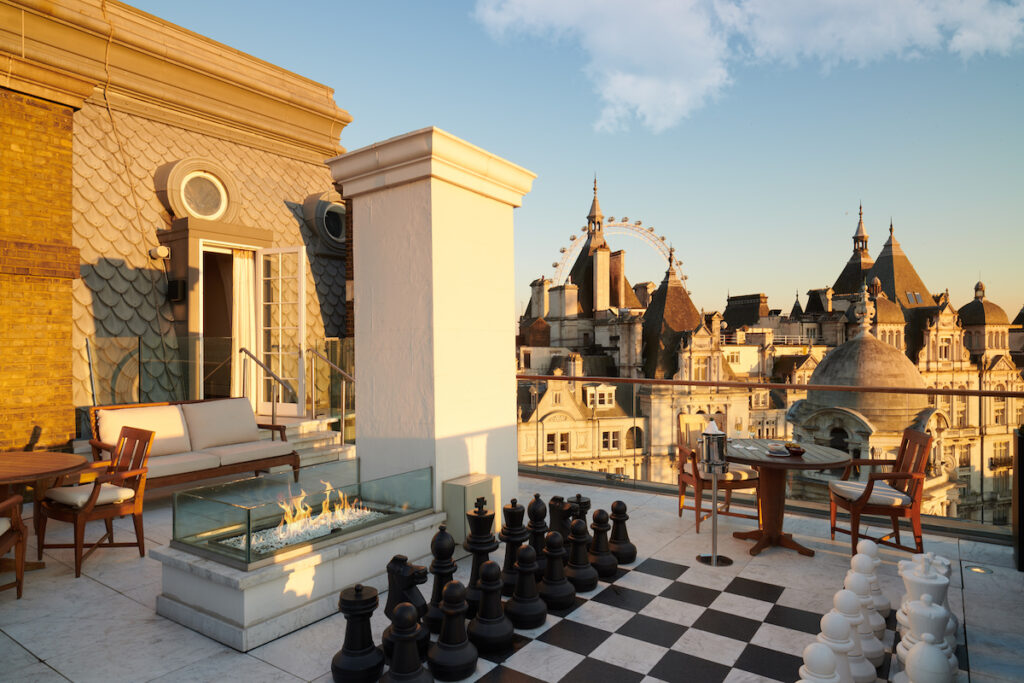 Nestled in prime position on the Embankment on the bank of the river Thames, with a discreet entrance tucked down a quiet side street, the grand Corinthia Hotel sits comfortably and conveniently at the crossroads of the historic locations of Whitehall – the city’s political epicentre in Westminster – and Trafalgar Square, and opposite the creative hub of the South Bank where some of London’s best galleries, theatres and markets reside – there are 30 theatres alone within a 15-minute walking distance. 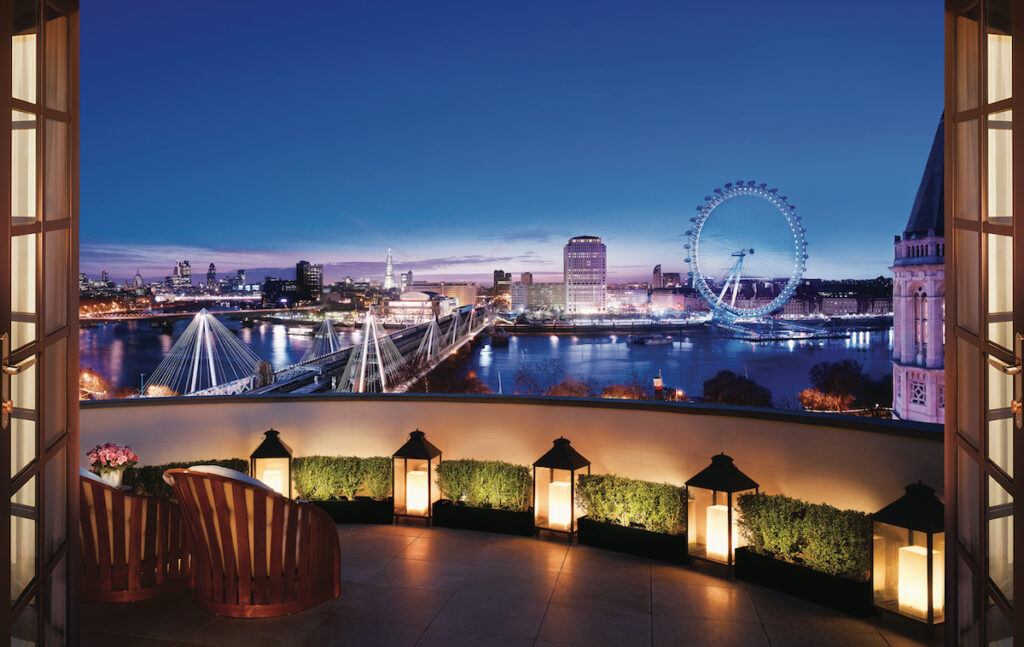 The Royal Penthouse overlooking the Thames River at twilight

A killer location if ever there was one, especially if exploring by foot is on the agenda. Making its debut in 2011, in less than a decade the Corinthia has become one of the British capital’s most revered hotel properties, boasting world-class restaurants, one of London’s largest spas, and some of the most breath- taking views of the city from one of its seven spectacular penthouses.

It offers something for almost every interest: ensuring wellness and spa junkies, and culture vultures and foodies alike all have plenty of ways to indulge their passions, whether as an in-house or external guest. 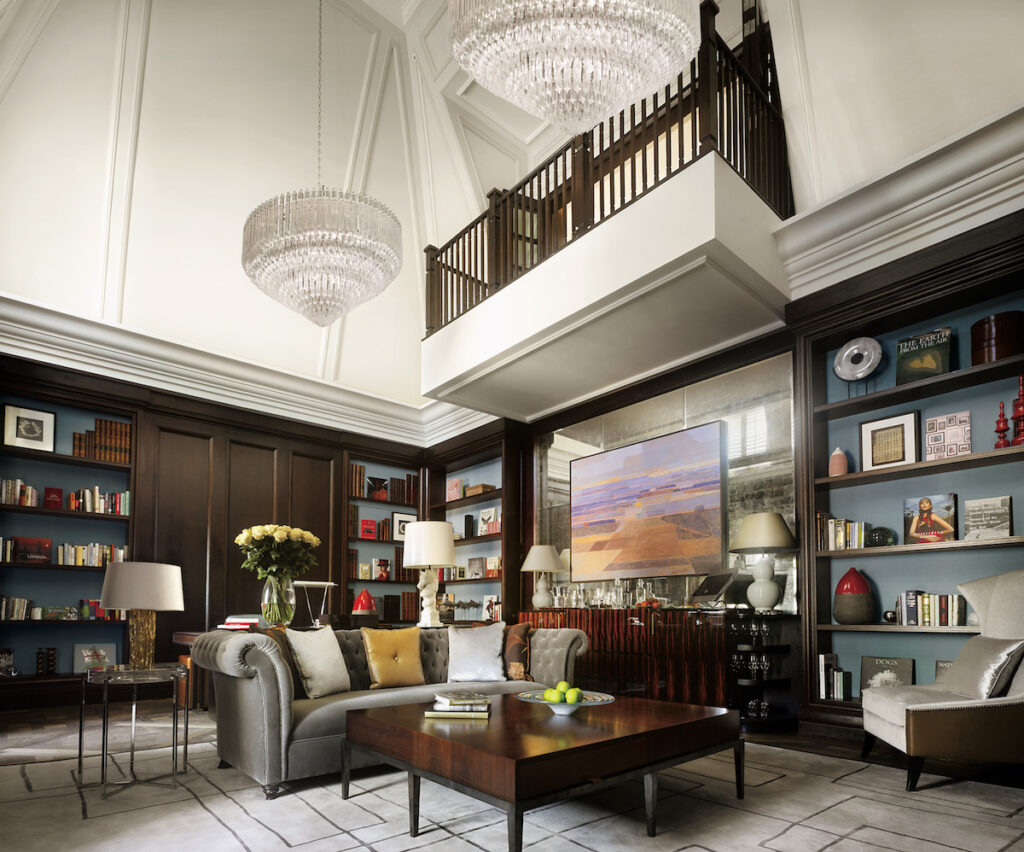 The double height lounge of the traditional Writer’s Penthouse

The entrance into the century-old building is, like many London hotels, inconspicuous with its grey stone facade and lack of fanfare. The only clue to it being a residence is the presence of the traditionally dressed doormen, who wait patiently outside, elegantly attired in top hat and tails awaiting the guest’s arrivals.

Housing 283 rooms of which 51 are suites, the hotel is sizeable, but at no point does it feel overcrowded even at full capacity, nor with the continuous flow of outside guests visiting to experience one of the recommended restaurants or to indulge in the afternoon tea at the bohemian-sounding Crystal Moon Lounge. 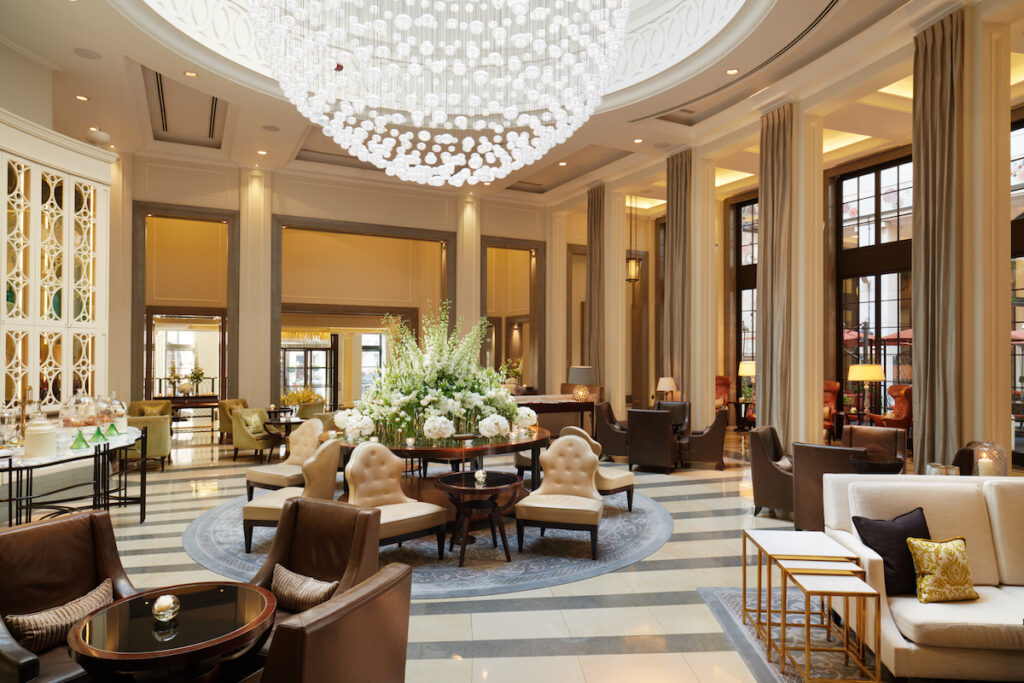 Previously the Hôtel Métropole in the ’20s, the welcoming interior decor is at once contemporary and traditional with the occasional nod to its Art Deco heritage. A neutral colour palette encompasses taupe and cream base tones, punctuated with dark wood, brass and leather furnishings, and contemporary art by mainly British artists lines the walls resulting in a homely and welcoming aesthetic, devoid of any stuffiness.

Flowers sit centre stage in all public areas, created by the in-house orist on the ground oor where remarkable, photogenic arrangements are designed daily and artfully positioned throughout the property, bringing life to corners and display tables. 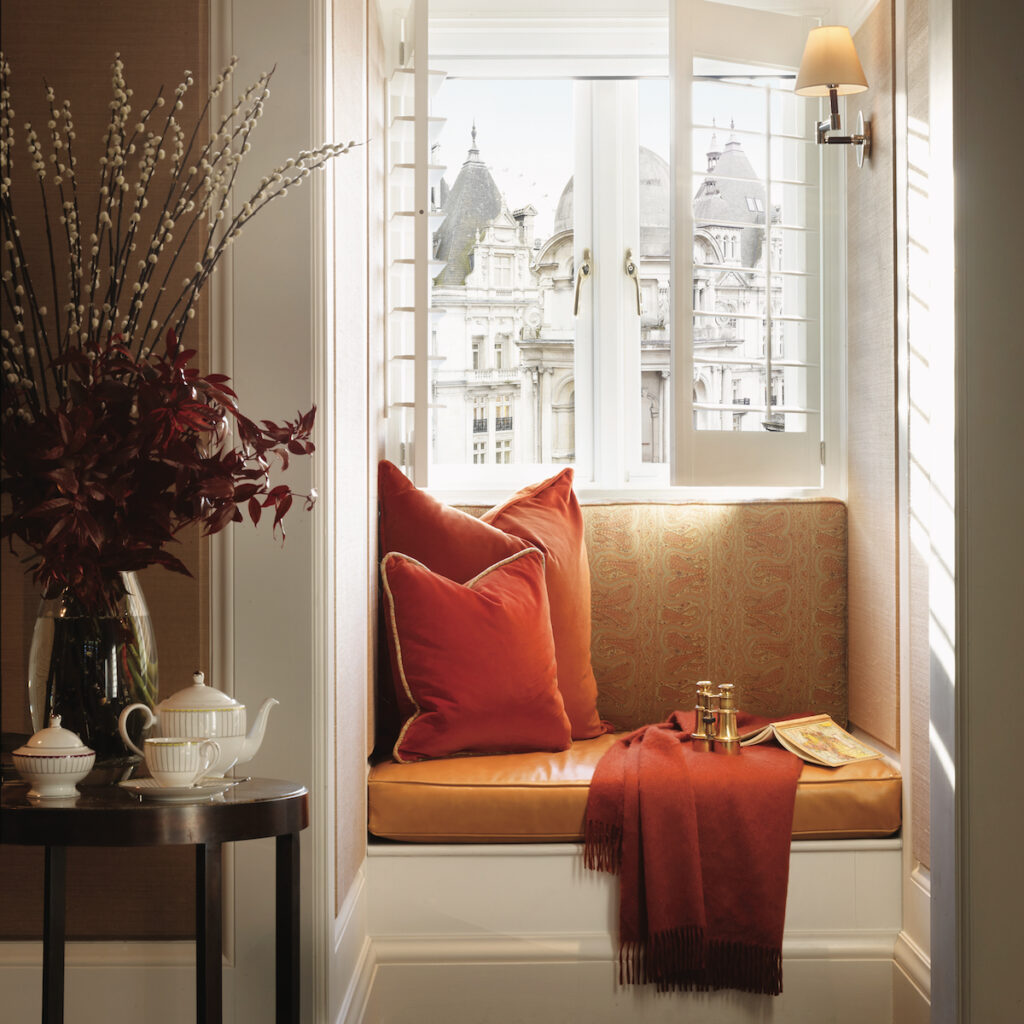 It is not, however, the interiors that set the Corinthia Hotel apart from its peers. Its real USPs are its not one, but seven two-floored penthouses, each designed with a unique theme, that really up the ante.

From the terraces, nearly all of London’s major landmarks can be seen, including Big Ben, the London Eye, the Shard, Nelson’s Column and Buckingham Palace, all of which can also be reached on foot in under 20 minutes. 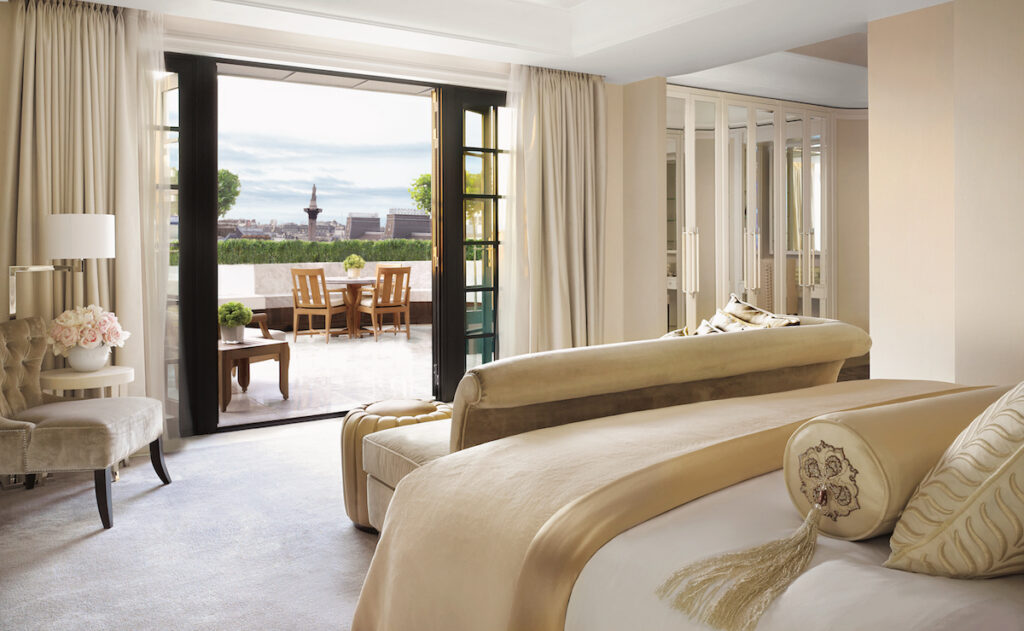 Each penthouse has been designed with a specific aesthetic, and all make use of the special rooftop views with large private terraces from which to peruse the London skyline, entertain guests or even play a game of giant chess.

The Royal Penthouse is unsurprisingly the largest at 462sqm spread over two floors that are connected by a lift. The palatial space contains a study, a 10-seater dining room, walk-in wine cellar, private spa suite, and a grand sweeping staircase that leads up to the four bedrooms. Decked out in cream furnishings with wood accents, expansive oral rugs and pink orchid arrangements, it’s elegance personified. 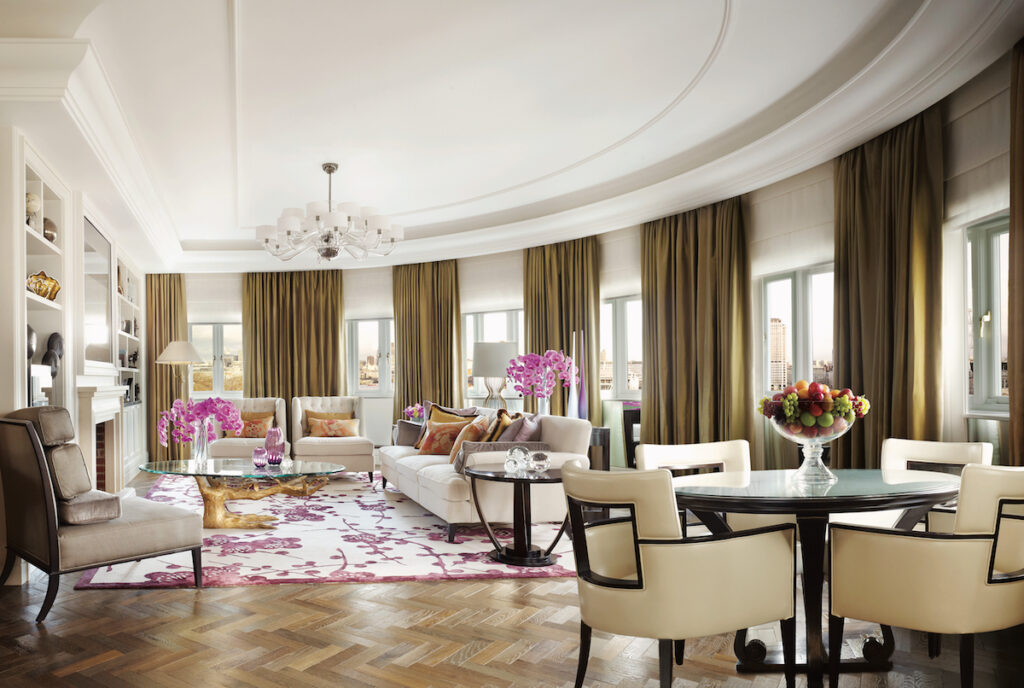 Next in line in terms of size is the Musician’s Penthouse, which naturally plays host to music lovers with a Steinway Model O piano in the living area, record deck and art with a musical slant adorning the walls. Its 81sqm outside space houses a dining area, gas re and river views on the one side and the city on the other, so guests can watch the world go by accompanied by their favourite sounds.

Perhaps the most appropriate choice for first timers, the Whitehall Penthouse is as grand as they come. Taking its inspiration from the city’s rich political history, Winston Churchill himself stood at the window of this building watching the celebrations on Armistice Day in 1918, and as such the Whitehall Penthouse has been designed with the iconic statesman in mind. 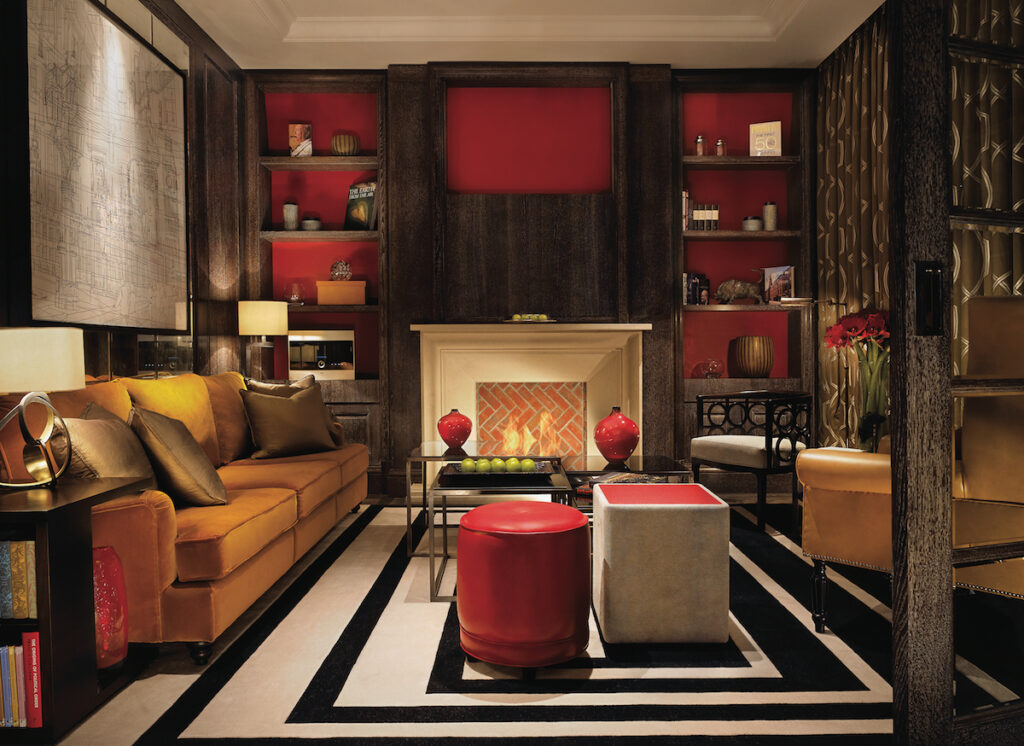 The wood panelling, cigar humidor and leather topped desk offer the refinement of a gentlemen’s club, and its terrace, on which a giant chessboard begs to be played, offers wow-factor views of the skyline. So, while the saying may go, ‘When a man is tired of London, he is tired of life’, the Corinthia Hotel offers up seven luxurious antidotes to fatigue. Corinthia.com

The Wellness Retreats You Need To Visit This Eid al-Adha

Five Wellness Retreats You Need To Add To Your Bucket List