From the humble beginnings of her first New York store to becoming an international symbol of female strength and independence, MOJEH.com steals Tory Burch from her a-list studded Rodeo Drive store opening to discover how she became the most sought after designer, from Manhattan to the Middle East and everywhere in between.

Amy Adams, Jessica Alba, Hailee Steinfeld – no, this isn’t the cast of Hollywood’s latest Oscar shoo-in, it’s just some of the glittering crowd celebrating the opening of Tory Burch’s West Coast Flagship. As these screen starlets lust over the shiny new collection adorning the rails on the first floor of the stunning three-tier boutique, upstairs Q-Tip is DJing as Rashida Jones, Emmy Rossum and Eva Amurri shimmy to ‘Rapper’s Delight’. Another floor up, Jaime King, Brad Goreski and Liberty Ross are on the patio, engrossed in a screening of Lisa Eisner’s dreamy short film that showcases the limited edition Rodeo Drive Collection, designed by Burch to honour the new boutique. Shot within the lush environs of Lotusland near Santa Barbara, the film strikingly exhibits the collection’s inspirations: the flowers of Southern California and the glamour of Old Hollywood. ‘Creativity and business can work together,’ Burch confides as we cosy up in a corner. She’s referring not just to the store and the corresponding short but also to her career in general. ‘You’ve got to have fun with fashion.’

Burch’s imagination and reverence for understated, natural beauty is reflected in the décor too, as bountiful green hydrangea arrangements flood the 4,700 square-foot space with organic splendour. The interior, which has been custom-designed and brought to life by architect Daniel Romualdez, is scattered with personal touches across every inch of the intimate boutique: black and white photos of the Burch family, flea market finds like tables and mirrors the designer scooped up while traveling in Paris and Morocco, and even needlepoint pillows adorned with quotes from Burch’s childhood, including ‘Everything begets thee to me.’ Even the catering is unique to Burch as guests (or more appropriately, friends) enjoy Philly cheesesteaks (a homage to her hometown) and sugar-dusted doughnut bits (Burch’s favourites).

That’s the thing about Burch, while she may be heading up a globally recognised, billion dollar brand, she never trained as a fashion designer or a businesswomen. Thus, the reason Tory Burch the brand has become a global institution, adored the world over, is because it comes with all the familiarity and affability of a local independent boutique. Or in her own words,‘it’s simply about creating beautiful products that make women happy.’ Over the past decade, Burch has built an impressive empire on her humble tunics and T-logoed gold-medallion flats. In an aggressive market, she has steadily cultivated a reputation for offering chic and colourful bohemian-preppy sportswear at accessible price points, reportedly garnering the modest designer over $1 billion in sales last year. Burch, who is both creative director and chief executive of her eponymous fashion company, has derived her unprecedented success from not just churning out another trend-rocketing label, but by developing a ‘lifestyle’. Her ethos was inspired by her idyllic childhood, and her close relationship with her family. ‘My parents were very infused in my life, they always had a certain authenticity within their lifestyle. We grew up on a farm and were very family oriented. I grew up as a total tomboy.’

Burch has blossomed from a tomboy into a pretty, petite blonde, fully personifying the all-American optimism-meets-pragmatism spirit her garments display. Born in Pennsylvania, as a child she considered becoming a psychiatrist, but instead studied Art History at the University of Philadelphia. Upon graduating, she ‘cold-called’ fashion designer Zoran, who offered her a job as design assistant, permitting she could start the next week. Confidence spurred her to move to New York and take her first tentative steps into fashion. Following this, Burch went on to work as a sittings assistant for Harper’s Bazaar, before moving into PR and advertising at Ralph Lauren, Vera Wang and Loewe during Narciso Rodriguez’s tenure. ‘I learnt on the job, constantly pushing myself to try new things.’ 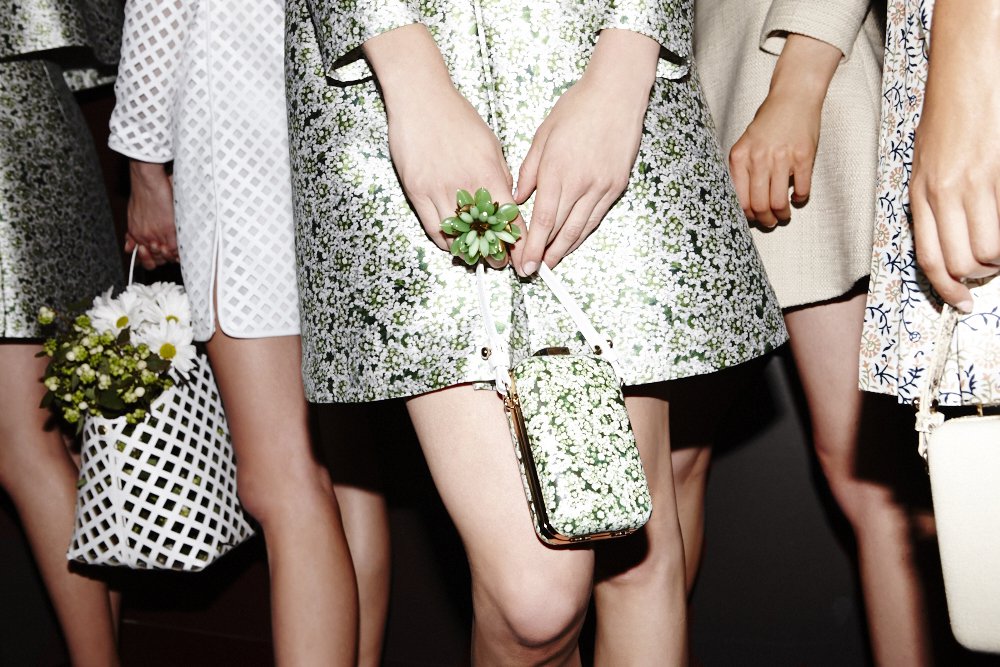 Her next new thing? Burch eventually launched her own brand out of her New York apartment in 2004. With the same valor that lured her to New York, she jumped into her new venture headfirst, launching multiple product categories and a standalone retail store, as well as e-commerce all in the one day. The direct-to-consumer strategy gave her total control over the customer experience from the get-go and provided a powerful platform to shape the brand’s personality. By the end of its opening day, the first Tory Burch boutique, located in what was at the time an ‘up-and-coming’ area of Manhattan, had almost completely sold out of inventory. Upper East Side socialites, cool magazine editors and top-tier fashion executives stampeded to the launch, apparently stripping to their underwear right by the racks, desperate to buy into this ‘new uniform’. ‘The rapid growth has been completely organic and down to having such a great team around me,’ Burch modestly assures me. ‘I’ve built this brand without advertising; it’s been completely organic,’ she adds with glimmer of pride.

Indeed, it was more of a subversive growth for Burch, as her T-logo medallion became like the emblem to a secret style club at top society soirees. Drawing from her encyclopaedic knowledge of vintage fashion, Burch blended timeless design with an eclectic, modern sensibility. Printed pieces with bold bohemian detailing, super chic bags and shoes, and a stunning beach range soon became her signatures. Of course, her greatest free advertorial happened when just ten months into trading, Oprah invited her onto the show in order to meet the mastermind behind New York’s most influential new look. ‘I love to work,’ Burch said during her 2005 appearance on The Oprah Winfrey Show. ‘I live a life where I take chances, and if I believe in something, I go for it.’ Burch’s upbeat attitude stole the hearts of those who’d already fallen for her product and cemented her reputation as ‘the next big thing’ – after airing toryburch.com received close to 8 million hits. 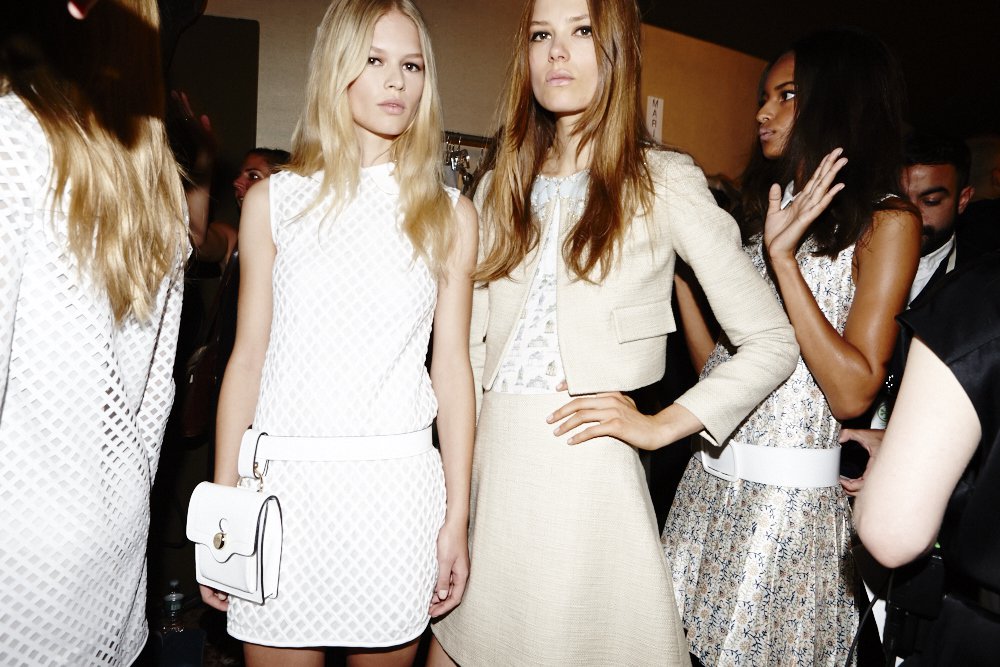 Today, the brand is stocked globally in over 80 Tory Burch boutiques and over 1,000 department and specialty stores worldwide; reportedly turning over $800 million in sales in 2012. In January 2013, Forbes magazine estimated that Burch is now a billionaire with a net worth of $1 billion. She is technologically savvy too and has established a strong presence on Twitter, Instagram and Pinterest. Yet, despite a seemingly relentless quest for world domination, Burch has maintained her decorum, and uses her success to inspire others. ‘Women should be just as ambitious as men and be proud of it,’ she said recently in a video released by Stanford University, cementing herself as a feminist and a philanthropist. In 2009, she established the Tory Burch Foundation, empowering women to strengthen their economic livelihoods through small loans, mentoring and entrepreneurial education. ‘I take my social responsibility seriously and through establishing TBF I want to empower women of all ages, and across all industries.’ Burch sets an incredible example for her mentees: while many investors have been vying for her company to be taken public, she has unyieldingly preserved her independence, and remains the company’s chief executive, head designer and biggest shareholder.

Dressed head to toe in the Rodeo Drive Collection – a powder blue, embellished metallic suit with a silvery floral shirt, matching shoes and dazzling flower-drop earrings – Burch mingles with ease around the room, almost as though she’s a party hostess in her own home, surrounded by close friends and family. Everyone is dressed in their favourite pieces from the collection, naturally and twinkling throughout the boutique is the now ubiquitous gold T-logo. One guest, who has flown all the way from China to celebrate her friend’s new store, reveals that in Chinese culture the logo is considered to be good luck because it is round. It certainly seems to have worked a treat for Tory.

Zeynab El-Helw On Navigating Motherhood In Style (And Loungewear)

Is Your Loved-One Facing Redundancy? How To Be An Emotional Support