The term ‘conspicuous consumption’ was first coined in 1899, by American economist and sociologist Thorstein Veblen in his book, The Theory of the Leisure Class. Veblen was among the first to describe how the wealthy used their purchasing choices to display their wealth and power and he theorised that certain products could defy the economic laws of gravity by garnering greater demand through ultra-high prices. Why buy a Chanel Boy wristwatch when Timex’s offering serves the same function? To assert power and status, claims Veblen. And while today, status remains central to our societal norms, conspicuous consumption, which became deeply embedded in much of 20th Century material culture and is present in everything from the latest AED3,673 iPhone X to a croc-skin Hermes Kelly, is now at a crossroads. Thanks to Veblen, status was previously associated with owning things, but now almost anyone can do that. Manufacturing has become cheaper, while credit cards, installment plans and loans enable those in the West to access expensive items that might have previously been out of reach. In her recent research into the decline of conspicuous consumption among wealthy Americans Elizabeth Currid-Halkett, James Irvine chair in urban and regional planning and professor of public policy at the Price School, highlights that while conspicuous consumption had increased for low-income households between 1996 to 2014, it had actually declined amongst the wealthiest.

Indeed, luxurious goods in the traditional sense have become democratised, affording them with less exclusivity and allure but the ways we consume, contribute and interact are also changing and this has been fuelled by the confluence of two major factors that have spurred a transformation in our priorities as buyers. Firstly, populations have soared globally, which has led to an influx of dense urban areas, placing importance upon sustainability to counter shrinking resources. Secondly, technology and its ubiquitous connectivity means that people are now more connected than ever before. These new dynamics work in unison to ignite a fundamental shift, altering how and where we, as customers, want to spend.

So as conspicuous spending becomes passé what are the current markers of status? In her book The Sum of Small Things: A Theory of the Aspirational Class, Currid-Halkett humourously describes the new elite as those that care more about discreet, inconspicuous consumption like ‘eating free-range chicken and heirloom tomatoes’. “They use their purchasing power to hire nannies and housekeepers, to cultivate their children’s growth, and to practice yoga and Pilates,” she quips. A study in The Journal of Marketing published by academics Vargo and Lusch, also argues that the world’s dominant economic logic based on the exchange of ‘goods’ had been supplanted by a new, more intangible dominant logic based on the provision of services and co-creation. “A lot of consumption patterns are still based on the status of owning ‘stuff’ – otherwise the luxury industry would have gone out of business – but people do tend to place a high, intrinsic value not just on the thrill of having a unique experience, but being able to share and distribute that experience across social media and within their network,” explains Paul Kemp-Robertson, co-founder and editorial director of Contagious Communications, a multi-platform marketing resource, who recently gave a TedTalk on Bitcoin and the future of branded currency. “We referred to this as 15 Megabytes of Fame, rather than Warhol’s 20th Century version: Your 15 Minutes of Fame,” he continues. Kemp-Robertson believes that the key markers of social status today involve having access to unique, exclusive, time-sensitive, experiences that make you “look like a maven” on social media or the private ‘dark social’ platforms, like Snapchat, Whatsapp and SMS. “People seem to get a bigger kick out of being their own carefully-curated media channel than owning the latest gadget,” he suggests.

Typically our wants and needs haven’t changed that much. We still watch movies at home, need local transportation and want to connect with others. But the early adopters that foresaw how technology could transform these desires, namely Netflix, Uber and Whatsapp are now taking ownership of these sectors. Indeed technology, in particular mobile technology which is responsible for everything from online banking to transportation of goods, restaurant bookings, accommodation, work-sharing and of course communication, is a driver behind the current trend towards owning less ‘stuff’. Being a ‘two-car household’ was once a signifier of status, but now millennials are challenging and contesting this definition, attaching more status to being a one or even zero-car family, utilising services like Careem, and Uber, and looking to concepts like Udrive, a UAE-based service that lets users rent a car by the minute. It’s seen to be far more savvy to use a vehicle exactly when and where you need to. 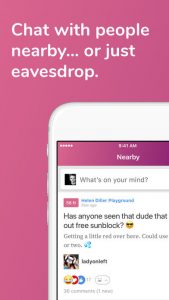 Mobile technology together with apps like Yo Neighbor! and DOLO are transforming the way we value our time and interact like never before

“I think today we are ripe for re-fragmentation: escaping some of the illusion of ownership,” says Raja Haddad CEO at DOLO, a location-based message board app for socialising and discovering what’s happening around you. “You can start placing Uber and AirBnB into moves toward re-fragmentation and taking back individual desires and whims. They are ephemeral experiences based on my needs of the moment. I don’t need to own a big structured world, I just need to own my here and now, in a way that leaves me more fulfilled, more flexible, more fluid to evolve as I wish.” And rather than populating our personal space with more and more ‘things’, sharing platforms unleash potential in objects and spaces that once were idle. “I come from Lebanon, a country known for its strong family and friendship bonds where it’s rare that you find yourself in need of something that someone can’t lend to you,” says Krystel Hoche, founder of Yo Neighbor!, an application that lets users rent and share everyday items ranging from camping equipment to DIY tools within their own community. “After spending a few years in the same building in the UAE I barely knew anyone, therefore whenever I needed anything, evenifIonlyneededtouseitonce,Ihadtogoandbuyitand then find storage space for it,” she continues. “I figured a lot of people were in the same situation with either an occasional need for an item or owning items they rarely use. Then it came to me – what if we can rent instead of buying those items.”

Outside of Lebanon’s famed hospitable and interactive environment there had to be a cultural shift in order for us to be comfortable with sharing our cars and homes and borrowing other people’s things. But it seems that we are ready, and even with the sharing economy there are still different levels of engagement. “I don’t think sharing economies will challenge class divides because there are still so many tiers and options in each of these categories that cater to almost all socioeconomic segments of the population,” says David Hay, founder of Spacegrab – a service which allows business owners to enter or exit from a leasehold in a seamless manner. Go to AirBnb, for example and for AED260,000 a night you can rent out an entire country, namely the principality of Liechtenstein that comes complete with customised street signs and a temporary currency. 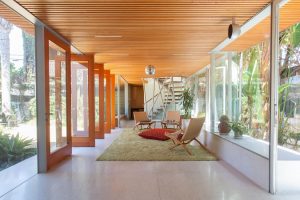 OneFineStay take the home-sharing sentiment to new levels of luxury

And then there’s AirBnb’s grown up, highly-polished opponent, Onefinestay. Run under a similar sharing model, Onefinestay offers exclusive access to premium properties across the globe in hotspots like LA, London, St Lucia, Japan, and Vietnam. Their database is rigorously assessed and villas and apartments are managed – stocked with the bed linens, grooming products and towels that one would expect to find at a five-star resort. One fundamental difference that might make this all the more appealing for those pushed for time is that there is no interaction between the homeowner and the guests. Instead, they are received into the home by a Onefinestay employee.

From task handling to home lending, co-working, and vehicle sharing, the sharing economy is rapidly opening up in surprising and diverse directions that see us spending and sharing in ways that even Veblen could not have predicted. Luxury, as we once knew it, is transforming. Jets, yachts and Malibu villas can all be rented by the hour and are becoming increasingly accessible, while the wealthy favour inconspicuous, efficient and experience- driven acts of spending. Embodying the current climate for accessibility over ownership, sharing, in all its guises taps into what is often labelled as the greatest luxury of them all – time.