The roads are filled with dirt and dust. Passers-by walk swiftly and with purpose as they shop amid densely-compressed outdoor markets and shops. Men and women on motorcycles speed away in packs to their homes, bars, restaurants or recreational centres for a football match, surrounded by the lush landscape of Democratic Republic of Congo (DRC). This is the industrial mining city of Lubumbashi, which lies on the southeastern edge of the landlocked DRC.

I’ve just been picked up from the city’s airport, and we’re on our way to the small village of Kalebuka where Malaika, an accredited all-girls school with a community centre, FIFA- built football field and a network of clean water wells, is situated. The journey ahead of us is long, and as we drive through the congested streets, I watch in awe at the scenes unfolding around me. Verdant, green-capped hills and mines frame Lubumbashi’s city centre with its remnants of Belgium’s colonial architecture.

The road gets rougher and bumpier just as the tightly-packed one-level shops get closer and closer together, many perched on the very edge of the basic dirt roads. Chaos reigns as cars honk, people hustle to buy and trade their goods and women cook fresh corn on every corner. Then there’s the churches and places of worship that seemingly occupy every street and alleyway. There’s always a cross to be seen somewhere, signifying a moment of peace and faith, but also a reminder of Congo’s brutal period of colonial rule. 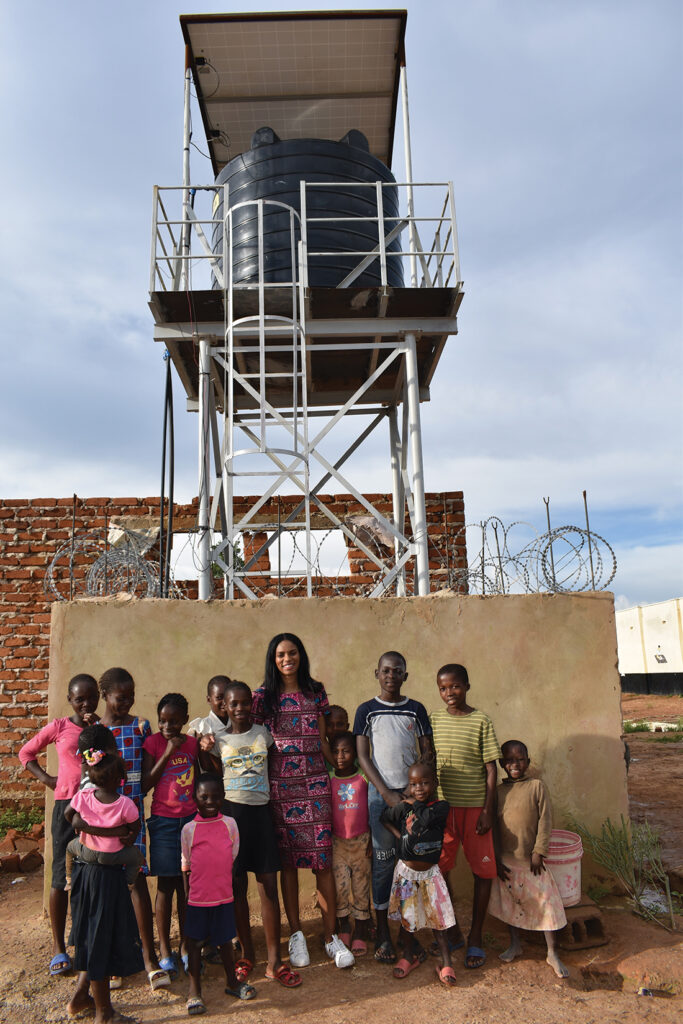 The road gets narrower by the minute, and soon, the hustle and bustle and hoards of people are no more. Comforting palm trees surround our car, and miles of greenery stretch out before us. We’ve just about reached Malaika – which means “angle” in Swahili – the school for girls of Kalebuka, founded by Congolese-Cypriot model and humanitarian Noëlla Coursaris Musunka.

Since meeting on one of her many professional trips to the UAE, for months, Noëlla had urged me to come and visit the school and provide pupils with art and writing classes. Over the years, I’d grown to develop a great love for Africa, particularly after visiting so many of its nations and reporting on its wealth of artists, museums, galleries and rising cultural institutions. I truly believe that creativity is crucial to human spiritual and intellectual development – in itself, it is a human need. But without enough water and food, how can this creativity thrive? These are questions that have long haunted me in my work, and here I was in one of the poorest countries in the world, albeit one of the richest in natural resources and burgeoning talent.

Finally jumping out of my ride from the airport, I was taken to a long stretch of land with swings, football nets and a playground – and there, I saw them. All the pupils from Malaika, wearing their identical navy blue uniforms, had come to greet me. A young, smiling girl ran towards me with a drawing she had made to welcome me, while her fellow students started singing Hatuna Matata, dancing and chanting with such fervour it brought tears to my eyes. 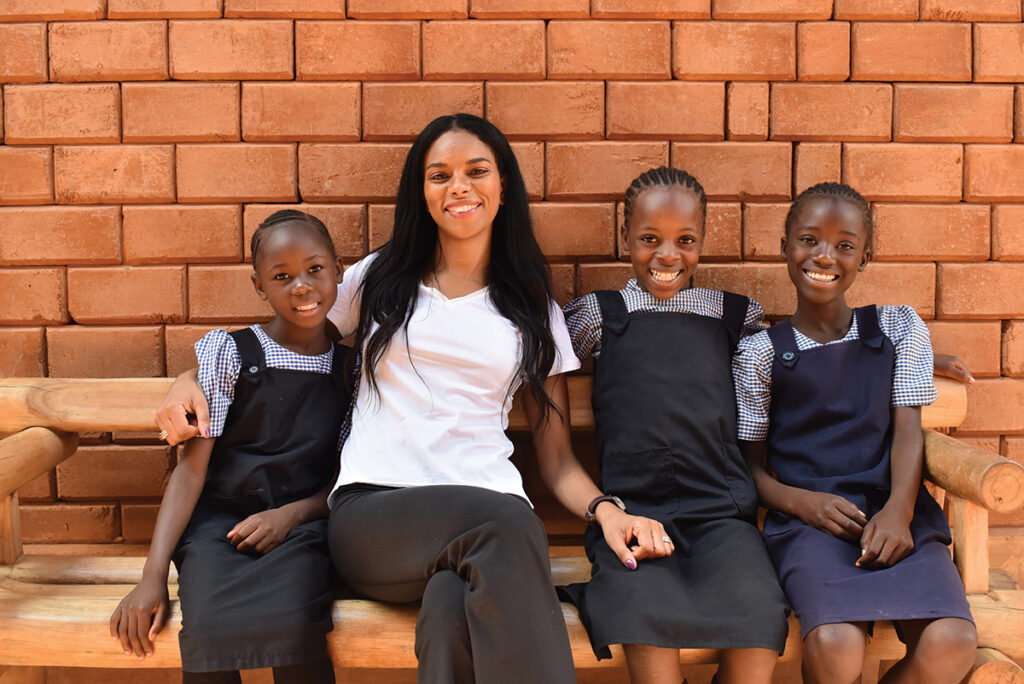 There’s a mural of an angel with outstretched arms on one of the outside walls of the playground. It symbolises Noëlla’s long-held dream to create a school for girls in DRC where they could have opportunities that didn’t exist when she was growing up in Lubumbashi. It was her own difficult childhood that led her to found the non profit Malaika that is providing free schooling to girls in the area.

While today she lives in London with her husband and two children, like thousands of children in DRC, Noëlla grew up in poverty. When she was five-years-old her father died and, realising she could not afford to care for her anymore, her mother sent her to Europe to live with her aunt and uncle. “I didn’t see my mother for 13 years,” Noëlla tells me. “When I returned to Lubumbashi, I saw the underprivileged conditions she was living in, and I wanted to do something to give back to the women and girls of DRC.”

Officially opened in 2007, Malaika originally started with just three classrooms and one well. “There was no water in the village, so we decided we were going to provide it for them. Now we have more than 20 wells,” she explains. “We also just finished three classrooms at the community centre where we aim to teach more of the youth, parents and adults to come to read, write and study maths.” 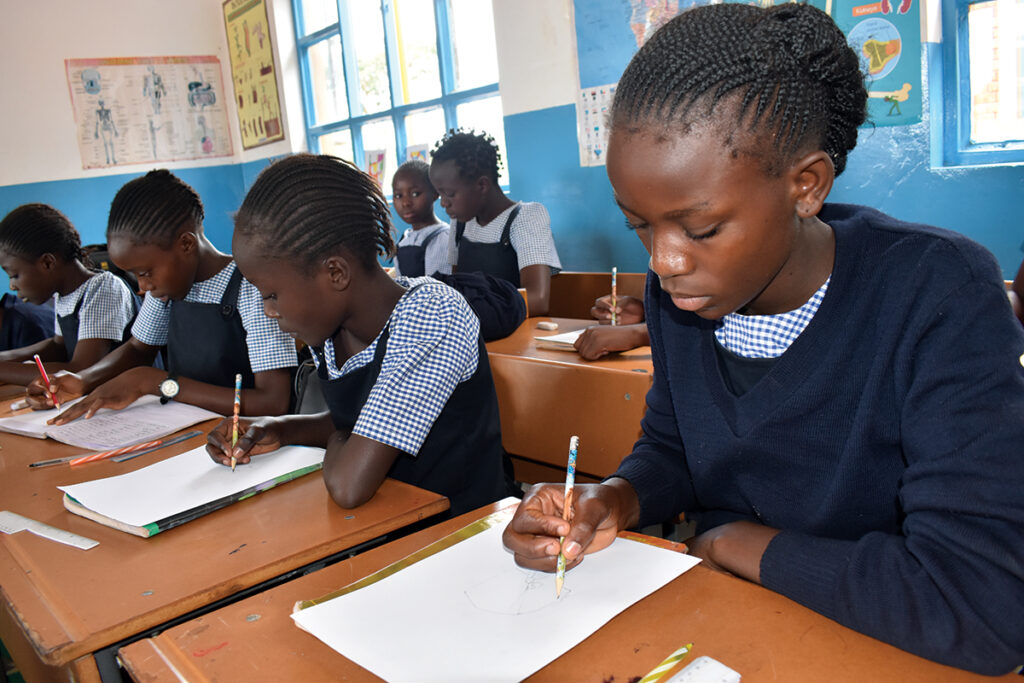 When Noëlla began the school in 2007, Kalebuka had no electricity, running water or education for its people. Many of the girls attending Malaika are the first in their families to ever go to school. The staff is 100 per cent Congolese, and classes are taught primarily in French.

The school now has 346 girls enrolled for free, an accredited primary and secondary school, a community centre and over 5,000 children, teens and adults that are receiving training in literacy, entrepreneurship, farming and community-building sports initiatives. Today, Malaika has built 20 wells, including the refurbishment of four existing ones – a system that now provides access to clean water for over 30,000 people every year.

I teach an art class to girls aged between four and six years old on my second day. I tell them to draw their home, and immediately, they pull out the brightly-coloured markers and crayons that I bought for them. They draw food, their mother and father, sisters and brothers. Sometimes the people they draw are smiling, other times there are frowns. 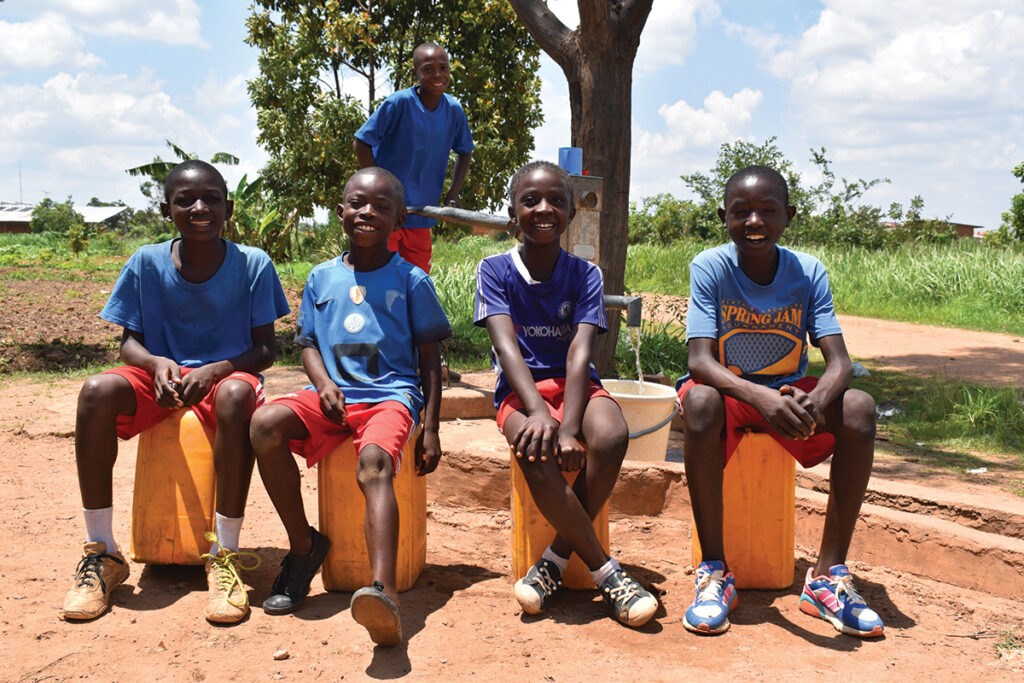 The drawings bring out their reality at home, what they have and what they lack. Their laughter and innocent smiles bring immediate joy to the space. No matter what conditions they come from, Malaika has provided a new world for them where education and creativity foster hopes and dreams.

“I want to be a journalist! I want to be a doctor! I want to be a business woman! I want to travel the world! I want to serve my community!” said girls aged 14-16 after a writing class in which I asked them to reveal their hopes and dreams for the future. There were so many with so much determination to be female leaders for their families and communities.

Spending a few days at Malaika is life-changing. Noëlla has made angels here on earth. “We want to create a student fund so that the girls can continue studying and doing what they want to do after Malaika,” she added. Signs of hope often come serendipitously and in small packages. Malaika is one of those. There’s a potential here for many schools like Malaika throughout DRC and Africa— schools that give way to hope, to dreams and to new realities. Malaika.org

Read Next: Artist Johny Dar on his jeans for refugees project

Could You Be Eligible For Dubai’s New Exclusive Members Club?