Think of fashion illustration and you think of David Downton. He talks to MOJEH about fame, the game and why a line isn’t just a line.

‘Renowned’, ‘illustrious’, ‘legendary’, all words that have been used repeatedly to describe fashion illustrator David Downton. It’s tricky to find adjectives that don’t feel well-trodden, sycophantic even. The other difficulty is that they’re all so appropriate. He is, quite simply, the most famous illustrator of his generation. Yet in an age of celebrity, his fame comes not from an overblown public persona, but through a universal appreciation of his work. There isn’t a quality publication his illustrations haven’t graced, no broadsheet that hasn’t sought him out.

If we do set aside his accomplishments for just a moment, there’s also much to talk about in terms of Downton the man. He’s sharply candid, something of a realist and witty in a sardonic kind of way. For all of the light romanticism of his work, he comes across as remarkably grounded. There’s none of the affected eccentricity that sometimes marks his ilk, despite him having previously said that the biggest misconception about him is that he’s an egomaniac. ‘I was attempting to be humorous with the egomaniac comment,’ he notes. ‘I think. Anyway, it’s a terrible mistake to try and describe yourself, also to try and describe your work or define your style.’ 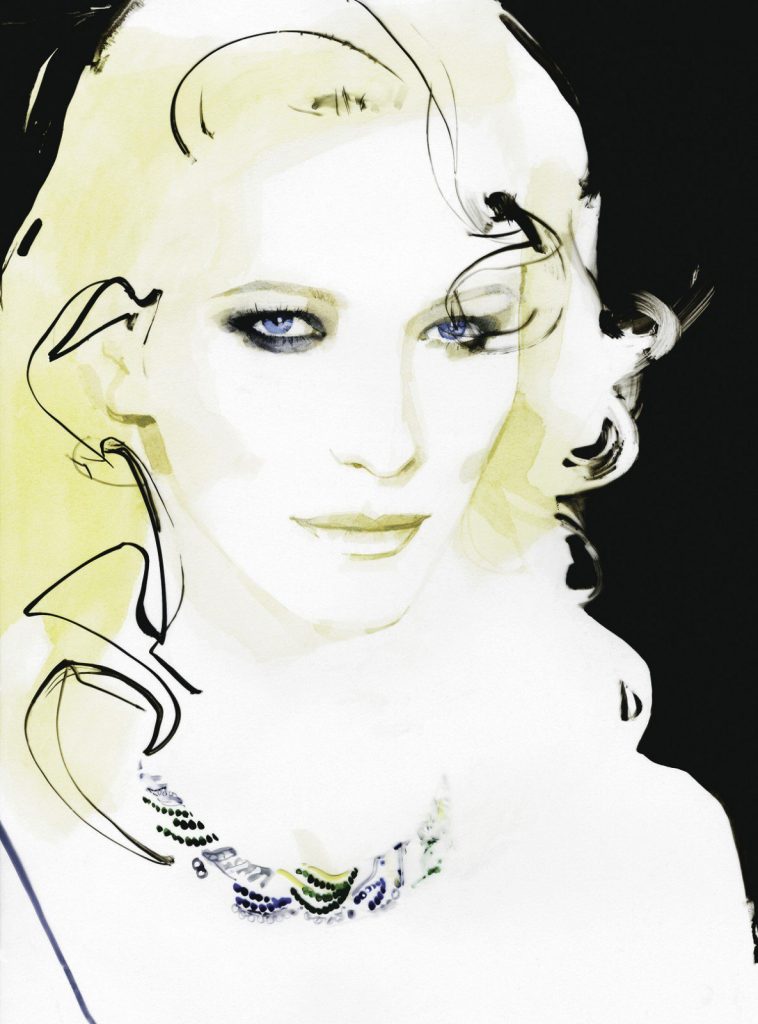 But then what of his own aforementioned celebrity and public profile? Surely that comes with the need for a little personality sculpting? Well, for Downton it’s all part and parcel of the industry today. He strikes us as something of a reluctant personality. That being said, you won’t find him complaining about the interest people show in his life or having to attend events. ‘The role has completely changed over the years. When I began, it was only about your work. Today you have to put yourself in the picture, so to speak. I see it as a game; you have to play it so you might as well enjoy it,’ he tells us. ‘I once read that I was the ‘world’s leading fashion artist’. I enjoyed that for five minutes, but also knew that the next step would inevitably be ‘formerly the world’s leading’. Tags are fun, easy to digest and endlessly recirculated, but they don’t have real currency and the only thing that matters is the opinion of someone you respect.’

Interestingly for someone who is now so closely associated with the world of fashion, and who seems to take the idea of fame and pomp with a pinch of salt, it was never his world in the beginning. Try to imagine a Lagerfeld or a Versace outside of the orbit of Planet Fashion and it’s a struggle. Yet with Downton his career started with much more traditional fare, working on projects from packaging to cookbooks. Beginning a career in illustration in 1984, it was some 12 years later that his big fashion break came along, when he was asked by the Financial Times to draw at the Paris couture shows. Since then his title as a leading, if not the leading, fashion illustrator has been cemented. He has fallen into the role with ease, but through his eyes we’re still presented with a vision of wonderment. In the way he captures those oh-so-familiar faces, we glimpse just a hint of the still-awed artist. ‘I never wanted to be in fashion particularly. It happened and I am extremely grateful, but my first vivid impressions were of cinema and I am still starstruck now. I would have loved to have designed film posters like my heroes Bob McGinnis and Bob Peak, but I didn’t have the talent. So for me, meeting and drawing Catherine Deneuve and Anouk Aimée, or more recently Rossy de Palma or Kristin Scott Thomas, is an enormous thrill. But fame is tough, only the smartest and most talented survive it.

Perhaps survival is what sets Downton apart. Whilst he may be self-deprecating about his own not-unsubstantial talent, the rest of the world thinks differently. There’s an appetite for his work that hasn’t faltered over decades of putting ink to paper. Still, success in illustration is not an easy nut to crack, never mind retaining it. ‘I don’t think there’s ever been a better, or more confusing time to be a fashion illustrator. There are few rules now and no accepted way of working, which is very liberating. That said, I am happy I started when I did and that I was able to make mistakes and learn as I went along,’ he explains. ‘There’s a lot of talent around now. There was a fallow patch, when being a fashion illustrator didn’t seem to be a viable proposition, but today so many people are fascinated by it as a discipline and an art form. We are so saturated by photographic images that illustration looks increasingly refreshing. Of course drawing predates photography by centuries, but right now I think it looks more considered and in a strange way, more modern. As long as we have designers, we will have artists and illustrators inspired by their work. Drawing tells an alternate story of fashion.’ 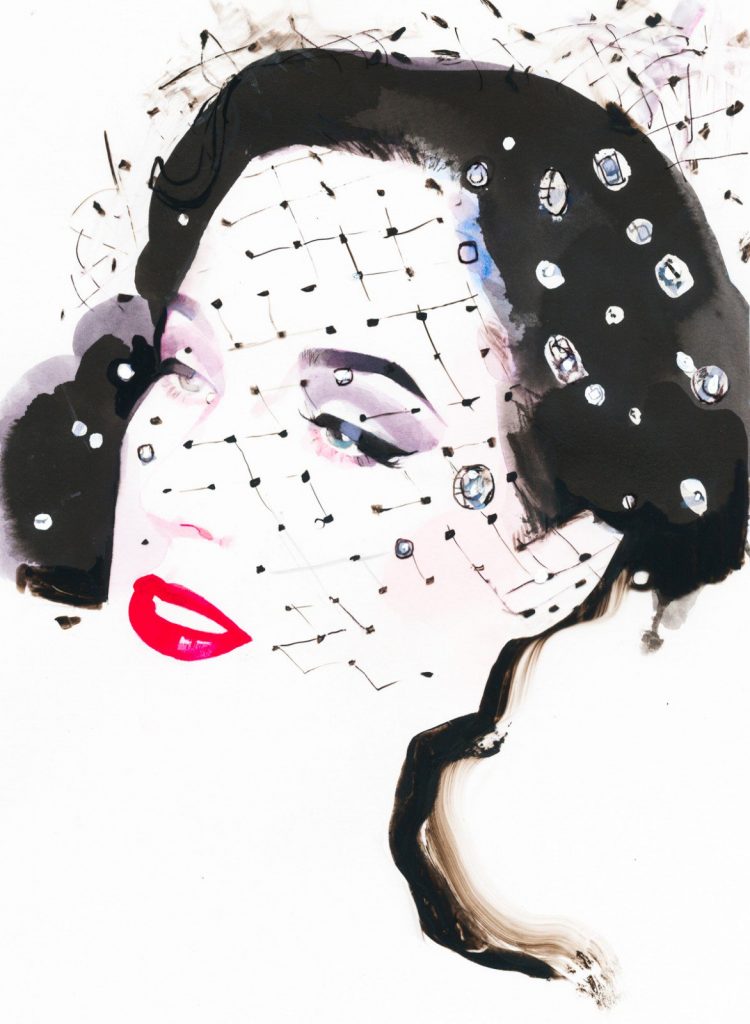 Unlike photography, the beguiling nature of illustration is found in its intimacy, in the immediate connection with the artist and, by default, the artist’s connection with their subject. Where photography seeks to capture, illustration drags a living moment from the page. Where photography puts a cage around an instant of reality, illustration creates it. There’s a poetry to it that Downton expounds upon as only an illustrator could, especially when we ask what he hopes to capture through his own work. ‘A sense of the moment, a certain fluidity and the appearance of effortlessness. It’s about capturing the spirit of the person or the clothes as economically as possible. I am passionate about line. The most exciting moment is that first flash of black on white paper. Line has always fascinated me. We can all draw a line, but some people can make the line funny, some can make it sexy, or invest it with emotion – yet still it’s just a line.’

It poses an interesting philosophical question: when is a line not just a line? The facetious answer might be, when it pays for 52 nights a year at London’s Claridge’s Hotel. As the hotel’s artist in residence, this is his payoff for supplying them with his work. It’s an arrangement that Downton has described as ‘the gig of the century’ and one that sees him sketching some of the hotel’s most notable guests. It’s also a project on which he gets perennially quizzed, but even when it’s raised once more (well, this is the Artist In Residence section), he seems understanding of the curiosity. ‘I get to stay in the most beautiful hotel in London,’ he says, more disbelieving than smug. ‘I meet extraordinary people. I have a table at the bar. Then, I get to go home. People say they envy me, but the truth is, I envy myself.’

Perks such as a suite on hand are, of course, lovely, but like most artists, Downton’s career highlights are more related to professional achievement. His favourite moment being a rendezvous down under with one of Australia’s most internationally recognised talents. ‘For their 50th Anniversary edition, Vogue Australia commissioned me to illustrate four covers, all featuring Cate Blanchett. She was, as you might expect, fascinating to draw. Also, it was beautifully set up; suites at the Dorchester, the best hair and make-up team, a full day given over to drawing. Thankfully, it did well. In fact, it was the fastest-selling issue in the magazine’s history and one of the covers won the Magazine Cover of the Year in Australia.’

Overall it might seem that Downton’s meteoric success had been a steady rise to sketching stardom. Famous faces, contracts galore and global recognition seem to sum up his career. Any forks in the road are missing from our bird’s-eye view of his creative journey. For a man who’s happy to ‘play the game’, it’s a perception he won’t be dispelling, as much for his own image as his attitude on achievement and what it takes to get there. ‘I’m delighted it looks that way. Let’s keep that illusion going. Success is for other people, just beyond your grasp, just out of reach.’