In January, when actresses showed up to the Golden Globes wearing all black as a sign of solidarity for the Time’s Up and #MeToo movements, it set the tone for 2018’s awards season.

Over the past two months, we’ve heard powerful speeches, read inspirational stories, and seen political accessories twinkle on the red carpet, including pins and symbolic white flowers, all of which have been worn in a stance against sexual harassment and gender inequality in Hollywood. And with the biggest and most glamorous personalities preparing for this month’s star-studded Oscars, there is no doubt that the upcoming night’s fashion will similarly address the inequality movement that’s sweeping the lm industry.

It would seem that we’ve come a long way; it’s not difficult to remember a time when post-award show coverage was dominated by headlines brimming with ridiculously gendered questions. “Who are you wearing?” is, of course, a popular (and overused) line of inquiry, as is the go-to interrogation about how it’s possible for a successful woman to enjoy a healthy work-life balance: “Just how do you do it all?”

“In only a couple of months, Time’s Up has mobilised a group of very passionate women and men across industries to join forces to end harassment and inequality,” a representative says when asked about the organisation’s efforts. “We are committed to changing the culture of harassment and power imbalance across all industries.” Discussions about the additional challenges women face on a daily basis, particularly surrounding those in the public spotlight, is one that’s been ongoing for years. In 2014, Cate Blanchett made headlines when she called out E!’s film crew for ogling her body while she walked the red carpet for that year’s Screen Actors Guild Awards (SAG Awards). As the lens snaked to her waist, she crouched down and asked the camera operator: “Do you do this to the guys?” 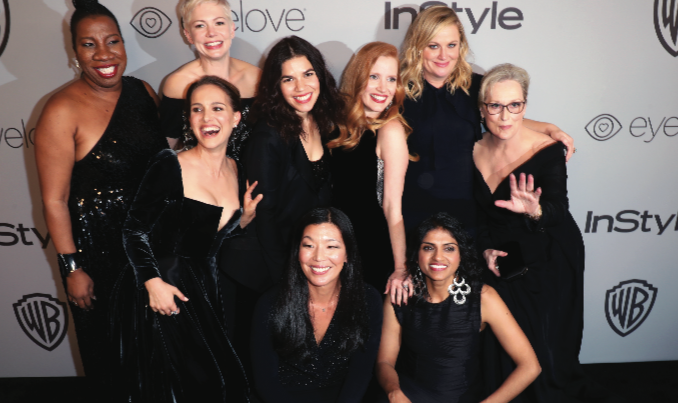 The actress’ comment relit an international debate about the uncomfortable level of scrutiny with which we judge the appearances of women. Not long after, the #AskHerMore campaign was born, spearheaded by The Representation Project, which urged reporters to focus more on women’s accomplishments and less on how they look. Saana Azzam is the founder of MENA Speakers, and is an expert in helping women position themselves as an authority in their chosen eld. “It has certainly given momentum and voice to the gender equality movement in a way that I’ve not seen before,” she says, when asked about the Time’s Up and #MeToo movements. “The ripple effect is there, but we still need to discuss the implications of discrimination, and we need to speak up until that’s not the norm anymore.”

This year’s awards season certainly signifies change, with eight highly-accomplished women accompanying numerous Hollywood stars, including Michelle Williams, Emma Stone, and Meryl Streep, to the Golden Globes, in an effort to highlight gender inequality. It would seem that women are finally being heard for what they have to say, rather than for which designer they’re wearing. “To be judged on superficial factors as opposed to merit and competence creates so much loss for our society,” argues Saana, but is asking women about their outfit inherently sexist? Unless it’s a question solely posed to women, and that’s the only topic that’s covered during an interview, probably not. And if there’s ever a time and place to obsess about couture gowns and high jewellery, it’s undoubtedly on the red carpet. After all, people who are interested in fashion want to know which designers their role models are championing and, for many, the Oscars aren’t so much about filmmaking as they are about Hollywood glamour. 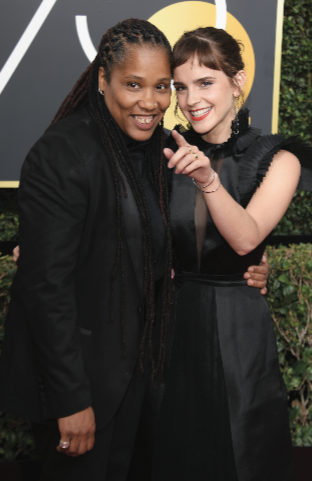 Emma Watson (right) attended the Golden Globes with women’s group leader Marai Larasi. Both wore black to show solidarity with the victims of harassment and assault

Because whether they like it or not, when a public figure steps in front of the camera, she is instantly vulnerable to the inspection of millions, who have gathered to admire the sparkling craftsmanship hanging from her shoulders, wrists and neck. And history does show that questions about fashion are regularly posed to women, as well as that if they’re asked anything else, the conversation tends to veer towards the superficial. Jennifer Aniston, Julianne Moore, and Reese Witherspoon have all famously refused to put their hands in E!’s famous mani-cam, with Elizabeth Moss going as far as to switch it o in an act of defiance. Nicole Kidman once refused to answer Ryan Seacrest when he asked her who she was wearing at the Grammys, and pretended not to understand his question, replying: “I don’t know what to say.” And while women are regularly answering questions about how long it took for them to get ready, men are asked about the films they’ve starred in and the challenges they’ve overcome.

There are, however, benefits to dressing well, with many actresses securing lucrative endorsement deals with the designers who style them. Cate Blanchett may have confronted the lecherous camera that panned across her body, but saying, “I’m wearing Armani”, isn’t a statement that insults her. She was reportedly paid Dhs3.6 million for her fragrance campaign with Giorgio Armani. “In my work, we discuss subliminal messaging of clothes,” explains Saana, which are often used to empower the wearer. Melania Trump, Queen Rania of Jordan, and Michelle Obama, for example, have all used their influence to publicly support diversity and creativity within the fashion industry, with the latter wearing the Maria Pinto, Jason Wu, Prabal Gurung, Tracey Reese and Christian Siriano. “This is a way to signal that engagement is important to them, and that they care about their audience,” reveals Saana, before adding that: “As much as I recognise that clothes can be used to convey important messages I still fundamentally believe that the day everyone wakes up and does whatever makes them feel great with no regard to what others think, then that is a win for all of us.” And despite the former first lady’s interest in emerging designers, Michelle Obama has also spoken about the disparity between her and her husband’s experience at red carpet events, arguing she’s been subjected to more style scrutiny. “People take pictures of the shoes I wear, the bracelets, the necklace – they didn’t comment that for eight years he [Barack Obama] wore the same tux, same shoes,” she commented during an appearance at Apple’s Worldwide Developers Conference.

During the presidential election campaign, Hillary Clinton was constantly judged on her penchant for pantsuits, so much so that political adversary Sarah Palin came to her defence, telling the Chicago Tribune: “Do you remember the conversations that took place about her [Hillary Clinton], say superficial things that they don’t talk about with men, her wardrobe and her hairstyle, all of that? That’s a bit of that double standard.” And while Barack Obama’s post-presidential style has been praised, from the wraparound shades he wore to go kitesurfing with Richard Branson to his open-necked shirts, his physical transformation has been largely linked to his emotional happiness. Meanwhile his wife’s physique and style is ruthlessly compared to other female figures such as Melania Trump and Amal Clooney, and women across the world continue to struggle to be taken seriously unless they dress a certain way.

In the 21st Century, many professional women continue to feel forced to conform to the predetermined white male power ideal: suits, straight hair and minimal make-up, while women who wear the hijab are frequently branded as oppressed by those who often have very little factual knowledge about its context. The importance here is not on what we wear, but whether or not what we’re wearing is being worn by choice. When Emma Watson posed in a barely-there Burberry cape for a Vanity Fair shoot photographed by Tim Walker last year, she was fiercely criticised. Broadcaster Julia Hartley-Brewer condemned the actress for her hypocrisy in campaigning against page three (a newspaper feature containing photographs of glamour models in the British tabloid newspaper, The Sun) while simultaneously bearing all in what she described as a “posh magazine”. It is, of course, understandable why many women are still frustrated with what they perceive as overt objectification of the female form, with many wishing for women to be recognised for their minds, rather than their bodies, but there’s no denying that we have both.

“Feminism is about giving women choice,” Emma, who attended this year’s Golden Globes with women’s group leader Marai Larasi, told Reuters after online commentary claimed that the photographs made her a ‘bad feminist’. “Feminism is not a stick with which to beat other women, it’s about freedom, it’s about liberation, it’s about equality.” And as such, surely to omit all mentions of fashion, particularly on the red carpet, would be unprincipled, not to mention unfair to the designers. Fashion is an incredibly powerful tool which we can use to express ourselves, and its potential definitely shouldn’t be overlooked within feminism.

But the only way to implement change is to point out the flaws in the system. Refusing to objectify women, while simultaneously admiring them, empowers our uniqueness and difference. And so what if she doesn’t want to answer: “Who are you wearing?” We should all be okay with her refusal to do so.