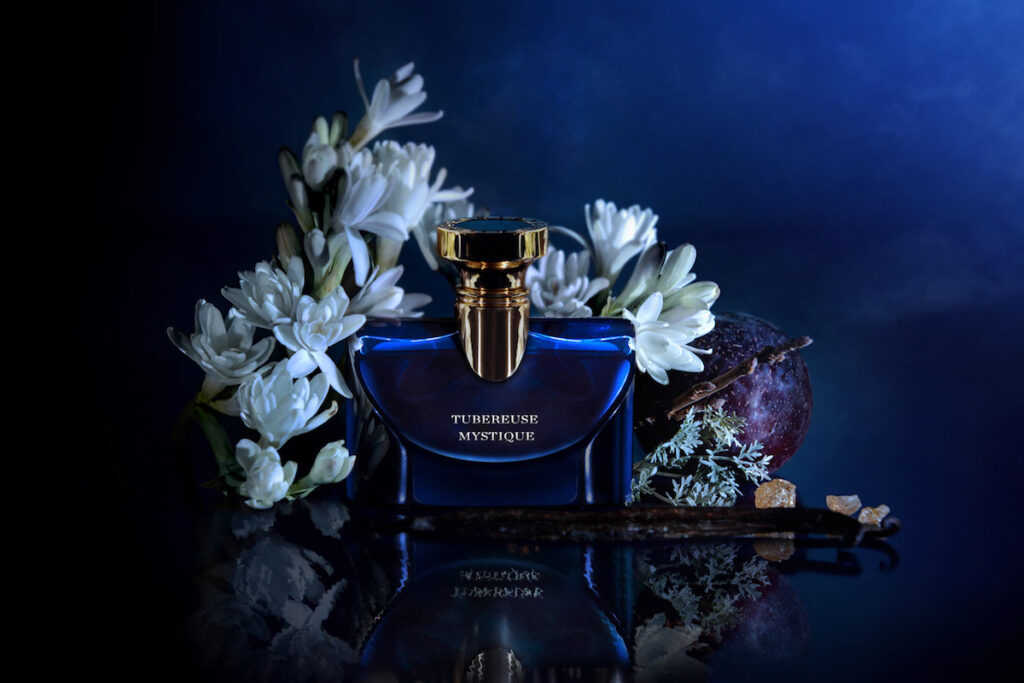 Like so much in life, when it comes to creating a fragrance, timing is everything. For Bulgari’s latest scent, Tuberose Mystique, the master perfumer Sophie Labbé chose to use the distinctive tuberose flower.

But instead of harvesting this white bloom during the day, when the flowers are in bud, she asked for it to be picked at night time, specifically dusk. “Collecting the tuberose at night is what makes this fragrance really special,” she explains. “This flower gives off its best olfactive pick at night – the notes are completely different – but until now it’s only been harvested during the day.”

Sophie explains that the logistics of picking tuberose “during the blue hour” felt experimental and challenging. “This was exclusive for Bulgari and we had a special team harvesting this flower at dusk near Mysore in the south of India,” she explains.

“It was difficult to find people willing to work during the night, and to find the flower under the cloak of darkness. It’s an ephemeral moment when the flower must be picked – you haven’t got long. Once it’s collected it has to be extracted very quickly and sent to our laboratory in the south of France.” 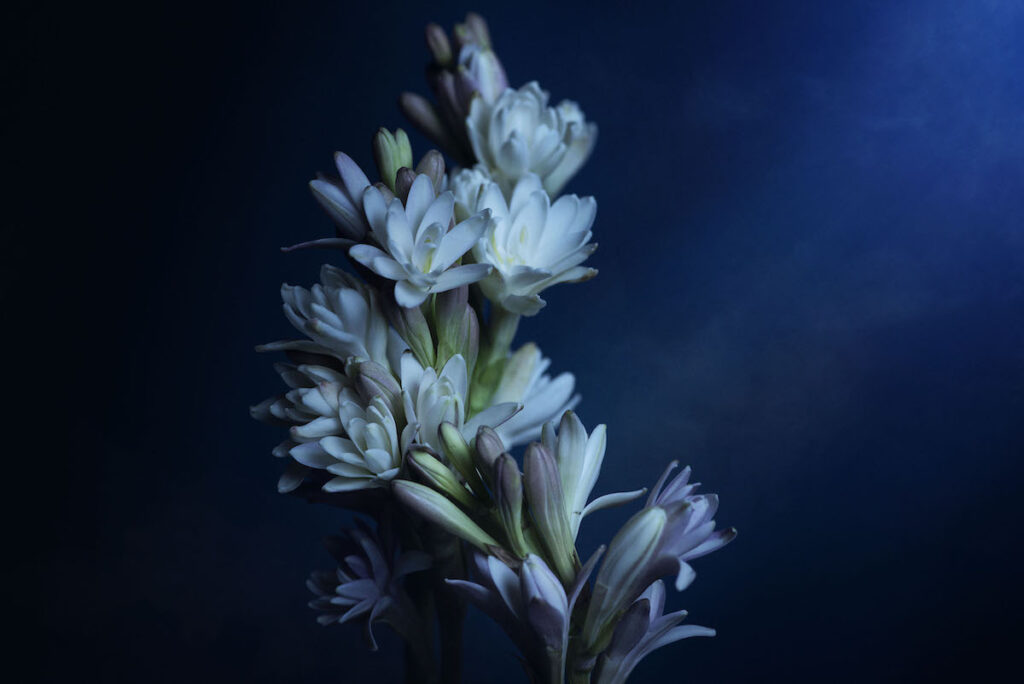 We’re on the balcony of the Mandarin Oriental, on the shores of Lake Como and Sophie gives me a tuberose flower to smell – one harvested during the day, and the other at night. Although I’m no ‘nose’, they smell like completely different flowers.

The daytime flower is fresh and green, but the one picked during the nighttime is intense and creamy, with hints of peach and vanilla.

Sophie, who has worked on eight fragrances for the iconic Italian jewellery brand, says that each time she works on a perfume she feels like a jeweller, chiselling and crafting a gemstone. Instead of a precious stone, she is working with nature.

“Just like how we wear beautiful fragrances, I liken that same effect to accessorising with Bulgari jewellery,” she says. “When you’re wearing a beautiful necklace, or earrings, there’s something special — you feel different when you have them on and it empowers you, so there’s really a true connection between wearing precious stones and wearing perfume.” 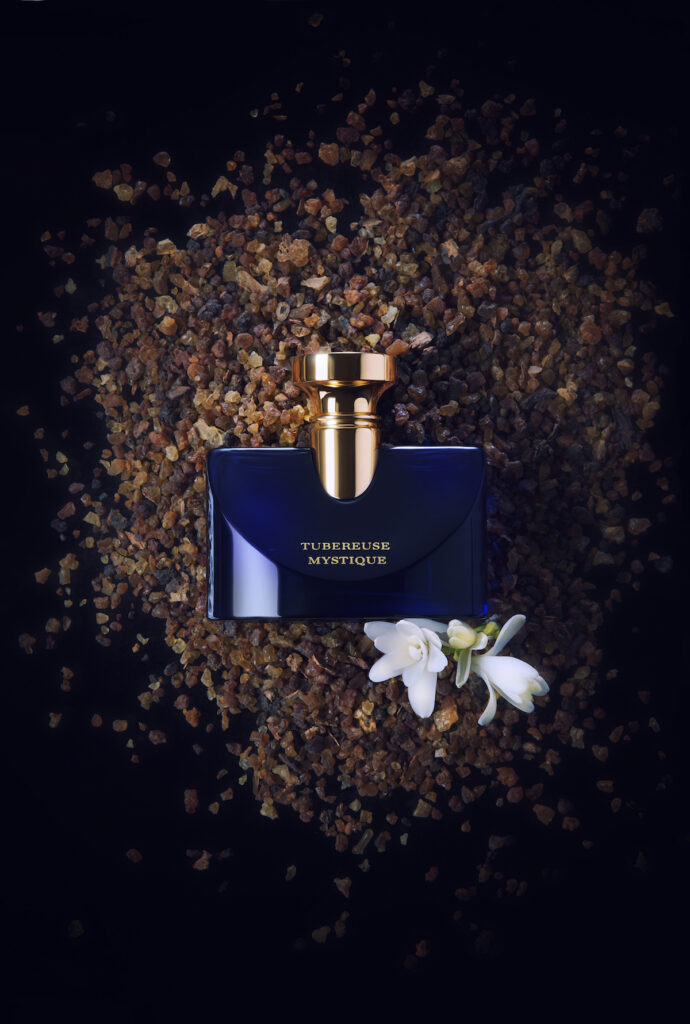 “They bring some darkness, some woodiness to the tuberose flower,” she explains. The bottle is a deep, inky blue, reflecting the twilight hours when the tuberose was picked.

Known by her peers as ‘the lacemaker of flowers’ for the way she intricately weaves together oral notes, Sophie says that being a perfumier was always her destiny.

“Fragrance has a power to remind you of a person, a place or a moment in your life, and there’s something unique about that. It’s very present in a way that your other senses aren’t. Even if I haven’t seen a person or smelled their fragrance for years, if I walk past someone in the street who’s wearing it, then I immediately think of them. Fragrance is like time travel in that way.”

Sophie was studying chemistry at university when she read about the ISIPCA School of Fragrance in a magazine. “Straight away I called them up and said ‘I would love to use my nose’,” she recalls. “I had some olfactive tests where they asked me to recognise ingredients and their strength, and I was asked to show my passion, and I knew this is exactly what I wanted to do.”

She spent her childhood between Paris and the Charente- Maritime area of France, encountering contrasting smells: the odours of a bustling city, against the scents of the countryside – grape-picking and harvesting, swept with a salty breeze. “I associate different smells with times in my life,” she says. “My earliest scent memory is my mother’s fragrance on her scarf – there’s something very reassuring about that.” 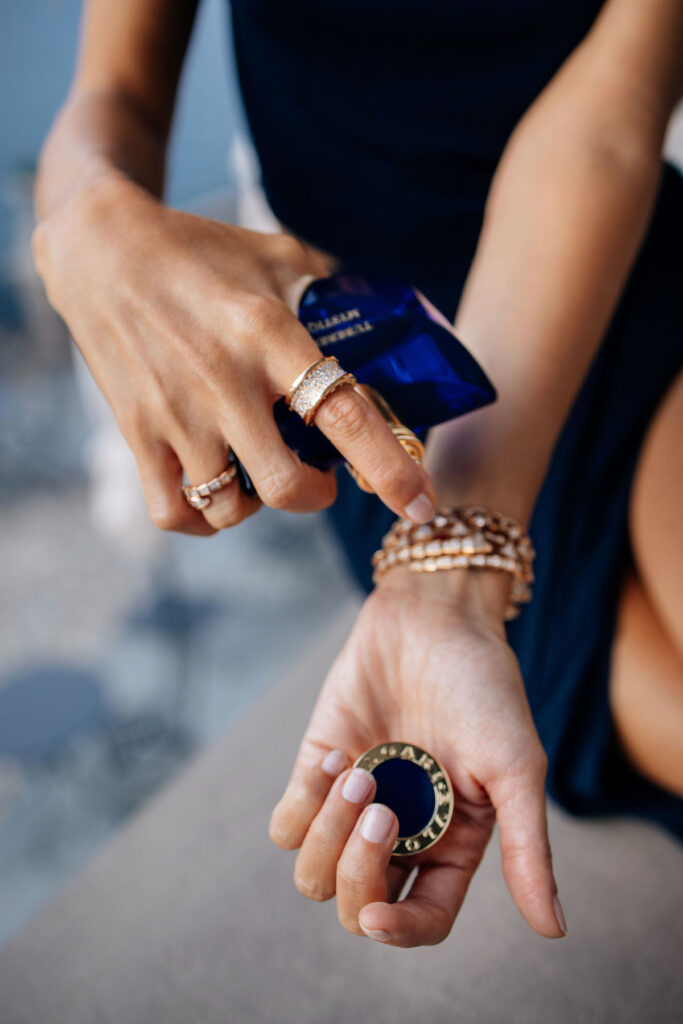 “When I was a student travelling the world, I used to take a different perfume to each different country I visited,” she says. “When I worked on the first Jasmin Noir for Bulgari in 2008 I incorporated almonds, because I had just had my first child and I was feeling this sweetness and childishness.”

She describes working with Bulgari for over a decade as “a dream job. When it comes to preciousness and details you can’t compare anyone with this luxury house,” she says. “Everything they do is perfection, so you have to have the nest ingredients, captured at just the right time.”

Sophie says she thinks of each perfume as a woman, and for her, the Mystique woman is a strong and powerful character, full of contradictions. “Tuberose is a captivating flower because it seems innocent and pure, but really it’s very powerful and intoxicating. In India it’s used during religious ceremonies, but it’s also called ‘the mistress of the night’. So it’s spiritual but it’s also sensual at the same time.”

“There’s an aura and generosity about this fragrance which I think makes it perfect for the Middle East,” she adds. “A woman can wear it not just at night, but any time she wants to be captivating. It’s alluring and sensual but also subtle and refined – that’s the power of Mystique.”

Five Beauty Launches on our Radar this Week