Thierry Wasser, Guerlain’s master perfumer, has long guarded the family legacy of fragrance creation, ever since he took over the reins from his predecessor, Jean-Paul Guerlain, as the nose of the French house in 2008. Passionate about sourcing the finest raw materials, Wasser reveals the intimate details about his recent work of art in the world of perfumery, with the unveiling of olfactory masterpieces within the L’Art & La Matière collection

“I think the humanity behind fragrance is much bigger than people would even think,” says Thierry Wasser as he sits down for a chat with MOJEH to discuss the latest collection from the house of Guerlain – L’Art & La Matière. Known for the legendary scents (Idylle, La Petite Robe Noir, Mon Guerlain, Santal Royal) created under his direction and nose, which have their own iconic place in the world of perfumes, Wasser is a true veteran at ethical sourcing for sustainability and quality, going further into the depths of every relationship with not just flowers but farmers. “I source bergamot, jasmine, roses, orange flowers and sandalwood – but the routes of sourcing need to be secure,” he says. As he gets into the details, the passion in his voice overflows to explain how he has now cultivated a brotherhood in every place visited to source material for the fragrances, which are often planned two years in advance. “Africa, Asia, Latin America – everywhere I go sourcing, I have my brothers and sisters. That’s what raw-material sourcing is about,” he explains, adding that it means going beyonda connection via email or Whatsapp to the point of actually living with the people to know how they cultivate, harvest and handle flowers for the exact outcome – which by any standard is a science in itself, guarded and handed down between the four generations of perfumers from the Guerlain family lineage. 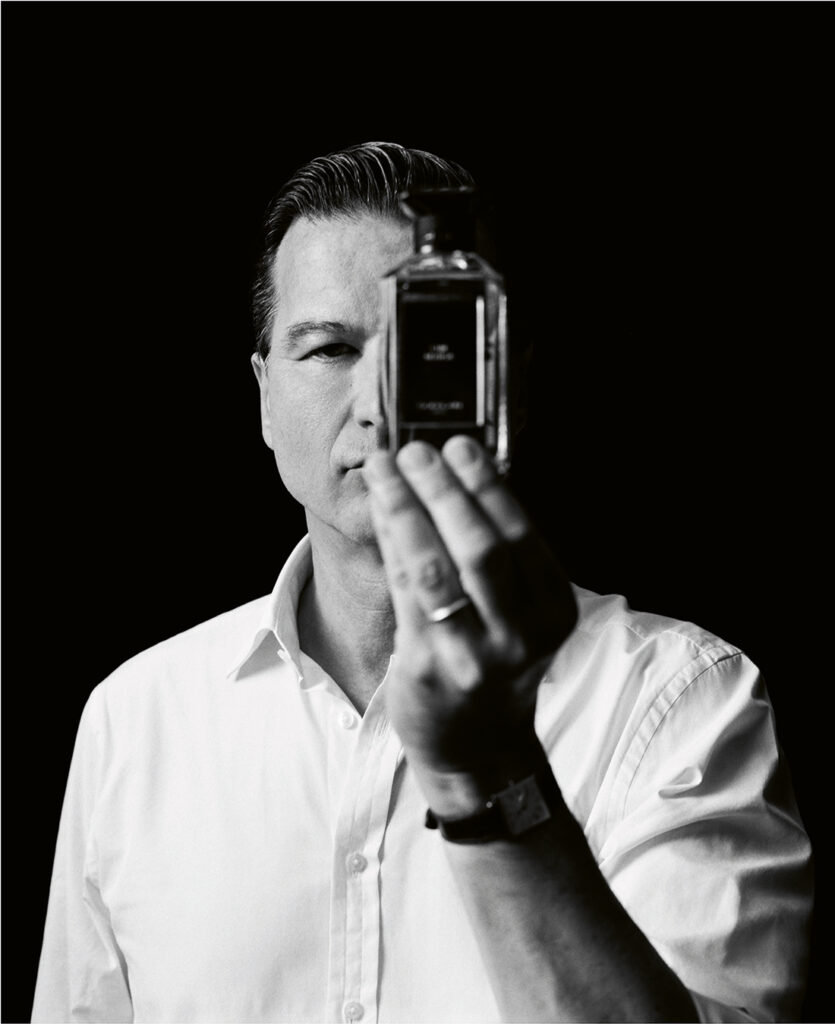 Since its very first production site opened in Paris in 1828, Guerlain scents have always been entirely made in France, with its fragrances manufactured in a factory that is one hour away from Paris, near Rambouillet. “It is at the edge of a forest, and it is very strange, because all of sudden you drive in the fields, you see a forest, and then the little factory, which has been there for the past 25 years,” says Wasser. It is here that he spends his time with a team of 10 people, together with whom he creates not only iconic fragrances but also remains the nose behind the signature scents for beauty collections, such as the best-selling bronzing range, Guerlain Terracotta, known for its emblematic notes of ylang-ylang, tiare flower, vanilla and bergamot. Following in the footsteps of his predecessor, Jean-Paul Guerlain, who scented Météorites, Wasser is dedicated to continuing the legacy without leaving anything to chance, not even the insights he transfers between the places and people he visits, or the relationships he chooses to nurture. “At Guerlain, everything is very specific. We don’t outsource anything,” he says, instantly clarifying the process that is followed. “We do the creation, the manufacturing, and if you have a manufacturer you have to outsource it, so I spend 20 per cent of my time at the factory and 30 per cent sourcing.” 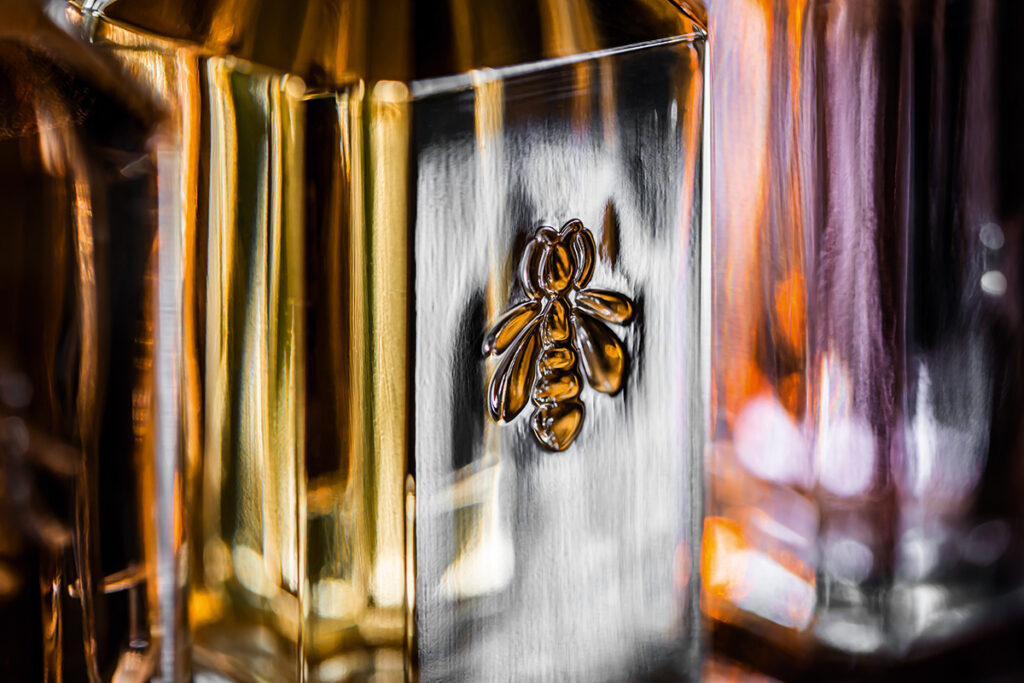 A bee – the symbol of Guerlain – adorns the bottles

It is important to understand that when Wasser talks about sourcing, he goes beyond preferences right to the heart of the matter, where the process is meticulous in terms of identifying farmers who have for generations been passing down their know-how to safeguard their quality and practices. It is from these preferred sources that Wasser selects every ingredient while sharing tips and insights with other farmers around the globe, whom he refers to as brothers and sisters, and are part of what he calls a brotherhood. “My predecessor, Jean-Paul Guerlain, was doing the exact same thing, so I didn’t invent anything. I am just carrying on what he was doing,” Wasser explains. Sharing a few examples, he talks about how he learnt the importance of roots at the terraced tea plantations in Sri Lanka, where the farmers plant tea vert on the steep slopes, and tea terraces to hold the soil together like a net, so that when it rains, the soil remains intact, avoiding erosion. In India, he learnt how farmers were alternating rows of tea vert with chilli peppers, and onions with carrots, to enrich the quality of the soil and avoid pests from corrupting the harvest, while in Africa, he learnt how people would use bees to keep away elephants. “On the field, I never see anybody,” he says, referring to how he gets down to understanding the local practices to ensure the quality of the produce. “You learn from others about their agriculture and skills, and you broaden your vision by listening and looking.” In India, Wasser was eager to teach and share the tip of harvesting bees, the emblem of Guerlain since 1853, to solve the problem they encountered with wild elephants in the corn and banana fields. For Wasser, this sharing of insights and tips is at the heart of sustainability, a practice which the house of Guerlain is proud to uphold since its very inception. 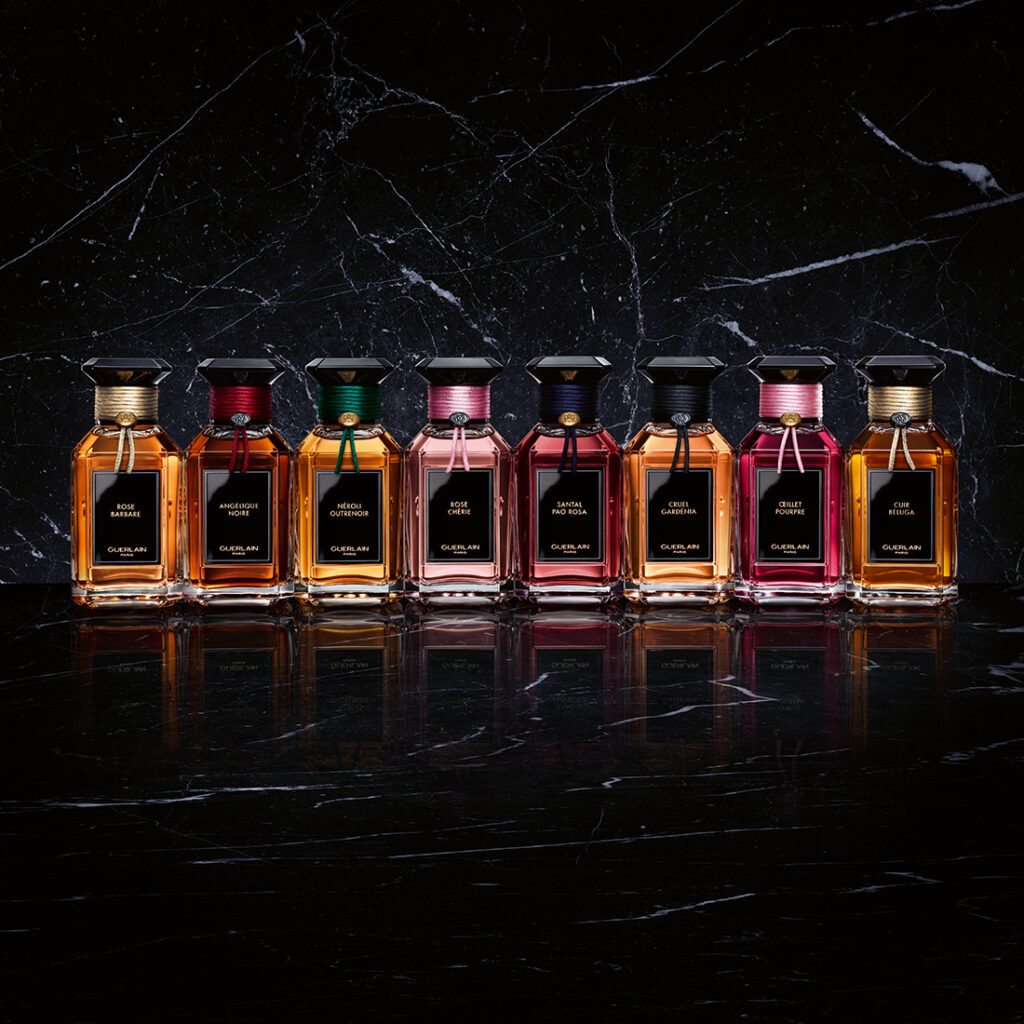 When it comes to manufacturing, the protocol is equally painstaking, even if it is just mixing ingredients in the lab. Choosing from over 1,000 raw materials, and ensuring that the outcome is exactly the same as the originals created in 1853 (L’ea De Cologne Impériale) or 1925 (Shalimar) is no easy task, especially when it involves keeping every ingredient in a temperature-controlled environment to maintain freshness and quality control, using seasonal flowers that have a particular time, process and method for harvesting – something which Wasser is all too familiar with, given his years of experience at the helm of the sourcing channels. “I know by the smell if they pick the open flower or not,” says Wasser. “I can tell what they do, and I can smell and say if there are too many leaves in the flowers.”

With the house of Guerlain becoming a member of the Union For Ethical Biotrade association (UEBT) earlier this year, it has strengthened its commitment towards ethical and sustainable sourcing, respecting humankind and biodiversity, and carefully considering the social impact of its supply chain. It is through this approach that the house aims to have its 40 most significant sourcing channels certified with the UEBT standard by 2026. This is precisely where Wasser connects the dots with the work he does and the passion he transfers into every relationship, sourcing responsibly and passing on the legacy to every buyer. “Sustainability is a human process. A tip from one to another will help; like the bees from Africa would help in India, or the technique of soil in Sri Lanka will help in Haiti,” adds Wasser, which he says begins with listening and looking at the local procedures, and building relationships that last for generations. “When I say it is about people, it starts with people, and people should know that when they spray a bottle of my fragrance, there are thousands of people coming out of the bottle – people who pick the flowers by hand, who distill oil from the flowers, and who are proud and hopeful for a better future. They trust you to buy their stuff. That is what is in the bottle, and that is what we do!” L’Art & La Matière fragrances are available at Guerlain counters nationwide and online

The Power Of Bespoke: Why Big Brand Perfumes Are Loosing Their Appeal

Experts Reveal The Best Sunscreens Of 2021