Dr. Habib Sadeghi On How To Find Clarity In The Midst Of Crisis

Challenges are something we have, not what we are. Making that distinction is crucial to creating clarity in the midst of trials and tribulations, says celebrity phycologist and TED speaker Dr. Habib Sadeghi

There’s a saying in self-improvement circles that goes something like: “What you think of me is none of my business.” It serves as a reminder that on our path of personal growth throughout life, we shouldn’t be looking to people and things in the external world to validate our sense of worth and who we are. Our life experience is created largely from the emotions and choices that arise out of what we think of ourselves. If that idea or image is based heavily on the opinions of others or the outcome of certain situations, then we disempower ourselves to a great degree and give up our ability to consciously create our lives to other forces that we allow to control us.

I always thought my own self-image was secure from outside influence until I was challenged by just such a situation. I had completed the final edit of my most recent book, The Clarity Cleanse, and was seeking endorsements from industry peers. Amid the glowing recommendations of friends and business associates, I was shocked at one endorsement in particular. It referred to me and the book in such bland terms that it rendered it nearly useless; a generic description that could have been applied to anyone else.

What made matters worse was that it came from someone I’d mentored for years. I immediately became upset and felt betrayed. At times, I was overwhelmed with feelings of inadequacy. I didn’t realise how much their opinion of me influenced what I thought of myself. In the following days I struggled with my consuming emotions and how I might respond to this person. It was on a hiking trip where I was sharing my feelings with a doctor friend who then suggested a functional MRI scan to see which parts of my brain were most active during my anguish, and that it might offer some insight as to how I could better deal with the situation.

At alternating moments during the test, he asked me to think about something I loved, such as my children, and then switch to focusing on feelings of betrayal and anger. The results showed that the emotional upset activated the same parts of the brain that deal with the fight-or-flight mechanism. For days on end, I had been putting myself through the same emotional and physical rigours as if I was being chased by someone with a knife. Looking at those contrasting brain images was a wake-up call. I knew I had to create clarity for myself about the situation by engaging in the 12 steps I’d just written about for my book and had used for more than 20 years to cope with and process many other challenges in my life.

It’s so easy to lose ourselves in the emotions of our problems and misidentify with them. Challenges are something we have, not what we are. Making that distinction is crucial to creating clarity in the midst of our problems, but it can be a difficult task when our language and culture often lend themselves to confusing the issue.

In many languages, the syntax of having something versus being something is much more distinct than it is in English. For example in Spanish, “Tengo hambre” means, “I’m hungry,” but the literal translation is, “I have hunger.” In English, we say, “I am hungry.” This is a small but important distinction that subconsciously programs us to take on our experiences in such a way that we perceive them as part of who we are. We cannot differentiate between ourselves and the event. This becomes more significant when we think of contrasting statements such as I have sadness or I am sad/sadness. Because we often don’t have the language to express our emotional situation accurately, we misidentify with it.

The biggest issue with misidentifying with our problems and seeing them as who we are instead of a separate situation that we have for the moment is that it places us in an emotional holding pattern. We get stuck on the same thoughts that generate the same emotions that we become addicted to that drive the same behaviours and choices. It locks us into a negative emotional set point or attitude that becomes our new normal, without even realising it. Like an airplane that keeps circling the airport and can’t land, we can’t come down from our charged emotional state to create a space for clarity where resolution can begin.

Of course, the danger of going in circles is that fuel eventually runs out and we come crashing down to earth, exhausted. In the same way, the unchecked avalanche of stress and emotions that come with some of life’s problems will use us up, too. Before we know it, we’re looking back on decades that have been consumed by our sorrow, resentment or guilt that’s prevented us from being able to engage in life. Over the long-term, these unresolved emotional issues consume us physically too, altering our body chemistry to create a pre-critical terrain that suppresses our immune function, making us more vulnerable to everything from colds to cancer.

The Persian poet, Rumi, wrote a piece called The Guest House. In it, he talks about how various situations and their related emotions will come to visit us throughout life, like joy, anger, resentment, and sadness. Our job is to welcome them in as they arrive, resisting none, because while one rests in the bedroom, another emotion will soon knock on the front door, ready to replace him.

This is why I chose the picture of an empty cup to represent this process. Achieving clarity in the midst of a crisis requires becoming a holding space that can contain the problem and your emotional response to it while not entangling your identity with it. The cup holds the tea but is not the tea itself. It’s only from this perspective that we can begin the necessary work of resolving the matter at hand.

Part of my own healing involved contacting my friend and sharing my feelings. I would not be sharing his review with the publisher because I felt it had no bearing on me or any part of my work. It was essential to make this distinction and to speak my truth.

Creating clarity in the midst of crisis is about learning to break emotional holding patterns and making the mental space necessary for real thinking, realising, healing, and living to occur within it. No one taught me the process contained in The Clarity Cleanse. Its principles and techniques grew organically out of my own struggle as a way to understand the significant challenges that have occurred throughout my life. I certainly couldn’t have made it through those times if I’d allowed every crisis that came along to leave me in an unconscious, agitated state of mind. In fact without real clarity, some of those situations would have sent me to an early grave.

Let us set ourselves free from the constant promises we make to ourselves to lose weight, make more money or anything else that acts as a distraction from resolving the deeper issues in our lives that prevent us from moving forward. Let us commit to achieving clarity in a way that gives us a greater understanding of ourselves and command over our lives so that we can contain both the joys and sorrows in a way that we can bene t from all of them. 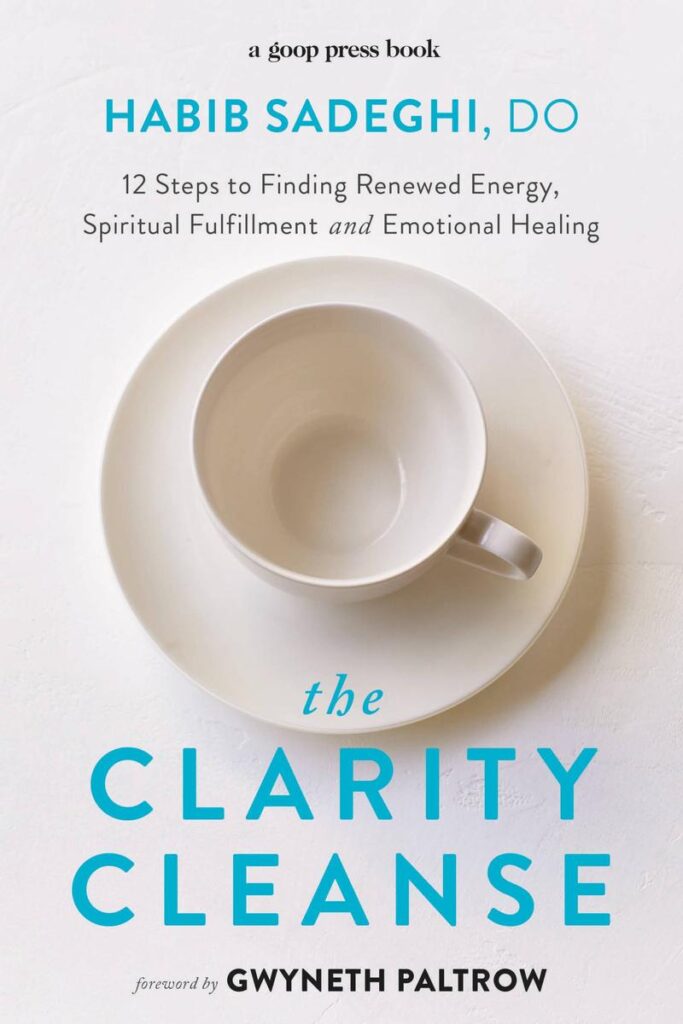 Dr. Habib Sadeghi is based in LA and specialises in spiritual psychology and is the co-founder of non-profit Love Button Global Movement, a published author and contributor to Goop. Instagram: @drhabibsadehghi